15 Fun Things You Should Know About Groundhog Day 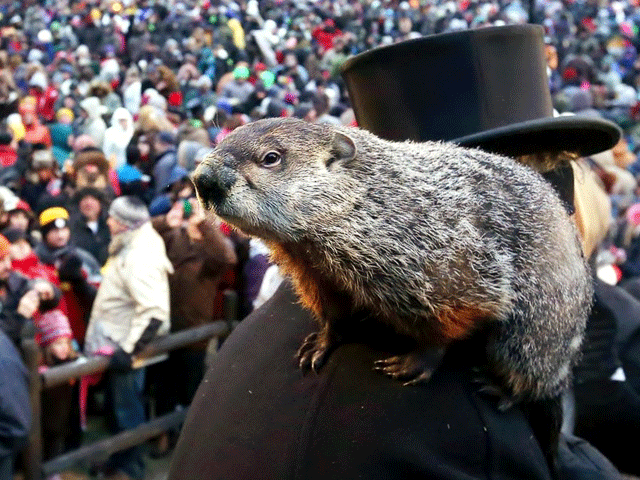 Yes, today is Groundhog Day, that most bizarre of all holidays. And this year, Punxsutawney Phil didn't see his shadow--one of only 18 times in more than a century that he has predicted an early spring.

But perhaps more importantly, why do we celebrate this weird holiday, and why on earth do we expect a groundhog to predict the weather? You're about to find out. Here are 15 fun facts you might not have known about ol’ Phil and the tradition he upholds.

1. There are dozens of weather-forecasting marmots across the United States, including Staten Island Chuck in New York City, Woodstock Willie in Woodstock, Ill., and Jimmy the Groundhog in Sun Prairie, Wisc. Even Canada gets in on the fun. But in a sad twist of fate, the residents of Manitoba recently lost their beloved Winnipeg Willow, who died just a few days before Feb. 2. This year, the good people of Canada have to rely on Ontario's Wiarton Willie or Nova Scotia's Shubenacadie Sam for their spring forecast.

2. But, Punxsutawney Phil is by far the most famous weather-predicting groundhog, and according to the Punxsutawney Groundhog Club, "the only true weather forecasting groundhog. The others are just imposters."

3. Phil's been predicting the weather for 130 years--but while he's been doing it longer, some argue that Staten Island Chuck is actually the better forecaster. (Blasphemy, we say.)

4. Phil lives a distinguished life in a climate-controlled home at the Punxsutawney, Pa., Library. He resides there with his little groundhog wife, Phyllis.

5. While wild groundhogs typically only live 6-8 years, there has been only one Punxsutawney Phil. The Groundhog Club claims Phil gets his immortality from drinking "groundhog punch". He takes one sip every summer at the annual Punxsutawney Groundhog Picnic, which gives him seven more years of life. It's like the groundhog Fountain of Youth.

6. People from all over the world descend on Gobbler's Knob in Punxsutawney every Feb. 2 to hear Phil's weather prediction. In the years following the release of the 1993 Bill Murray movie "Groundhog Day", record crowds numbering as high as 30,000 have visited Gobbler's Knob in the hopes of repeating the day over and over again.

7. The Groundhog Club's Inner Circle (you know, the guys in the top hats) maintains that Phil speaks his weather prediction to the club president in "Groundhogese," which is then translated for the rest of the world. Groundhogs are also known as "whistle-pigs" due to the high-pitched whistling sound they make when alarmed. We can only imagine what Phil's weather prediction sounds like.

8. Groundhog Day is an old tradition, with roots in the ancient European custom of predicting the weather with a badger or sacred bear. When Germans first settled Pennsylvania, they brought with them the legend of Candlemas Day, which states: "If Candlemas be fair and bright, Winter has another flight. If Candlemas brings clouds and rain, Winter will not come again." The settlers found plenty of groundhogs in their new home, and decided they were the most sensible choice for carrying on the Candlemas tradition.

9. However, 19th century American farmers used the adage, "Groundhog Day, half your hay." New England farmers recognized Feb. 2 as the heart of winter, and if a farmer had less than half his hay remaining, his cows were in for some hungry times.

10. The first documented reference to Groundhog Day can be found in a Morgantown, Pa., diary entry dated Feb. 4, 1841. The first official trek to Gobbler's Knob in Punxsutawney was made on Feb. 2, 1887.

11. Legend has it that Punxsutawney Phil was named after King Phillip. Before that, he was simply called Br'er Groundhog.

12. In the 1880s, according to Pennsylvania historian Christopher R. Davis, groundhog was the featured cuisine at the Punxsutawney Elks Lodge. Later, the Groundhog Club was formed, which hosted both the annual Groundhog Day ceremony and a summertime groundhog hunt and picnic. The picnic centered around various groundhog dishes and also featured a “groundhog punch” — a combination of vodka, milk, eggs, orange juice and other ingredients. If that wouldn't keep you going for seven years, we're not sure what would.

14. During Prohibition, Punxsutawney Phil was in dire need of some of his special punch. He got so cranky that he threatened the town of Punxsutawney with 60 weeks of winter unless they gave him a drink.

15. Phil's burrow might look small on the surface, but groundhog burrows can have up to 50 feet of tunnels and be up to five feet deep with multiple exits to escape predators. Groundhogs can move up to 700 pounds of dirt digging one burrow.

Farmers have been sharing winter weather stories on the AgWeb discussion forums. Continue the conversation on the “Winter 2015-16” thread.