18% of Contiguous U.S. Covered by Drought

According to the updated National Drought Monitor, drought covers just 18.4% of the contiguous U.S., the smallest area in more than five years, says USDA Meteorologist Brad Rippey. Perhaps not coincidentally, he notes, the U.S. drought minimum of 2010 occurred near the end of the most recently completed El Niño, which lasted from the summer of 2009 to the spring of 2010. 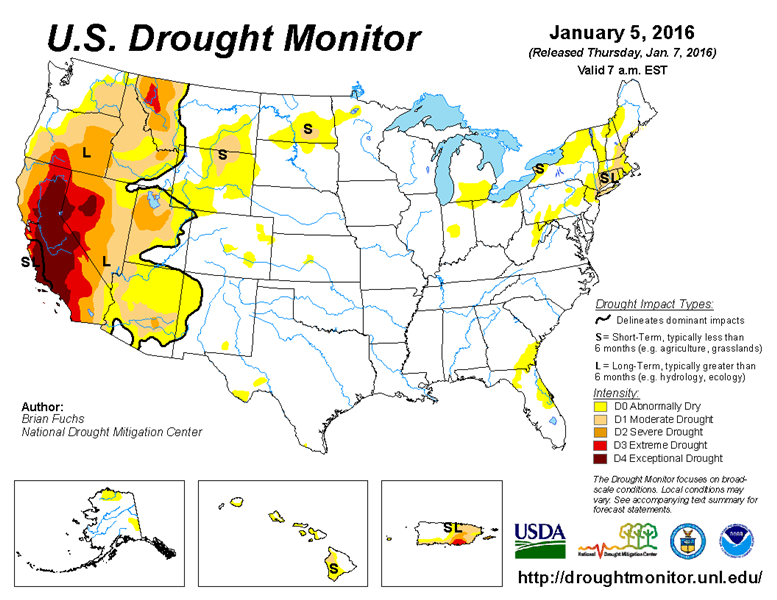 Since mid-October 2015, Rippey says a procession of storms, in part driven by a near-record-strength El Niño, has significantly reduced U.S. drought coverage from 34.8% to 18.4% -- a drop of 16.4 percentage points. "For many areas of the country, drought has become an afterthought in the face of heavy precipitation, record flooding, winter tornado outbreaks and more," he says. "December featured heavy, drought-easing or eradicating precipitation in the Northwest, torrential precipitation from northeastern Texas into the middle Mississippi Valley and additional heavy rain in parts of the Southeast."

As the New Year began, Rippey says a marked southward shift in the jet stream allowed colder air to invade the central and eastern United States. "But more importantly, brought the season's most significant precipitation to central and southern California," he adds. "Such a southward shift in the primary storm track is a hallmark of El Niño, especially in the January-March time frame, and could lead to significant, mid- to late-winter precipitation from southern California to the southern half of the Plains, as well as areas along and near the Gulf Coast and the southern Atlantic Coast." 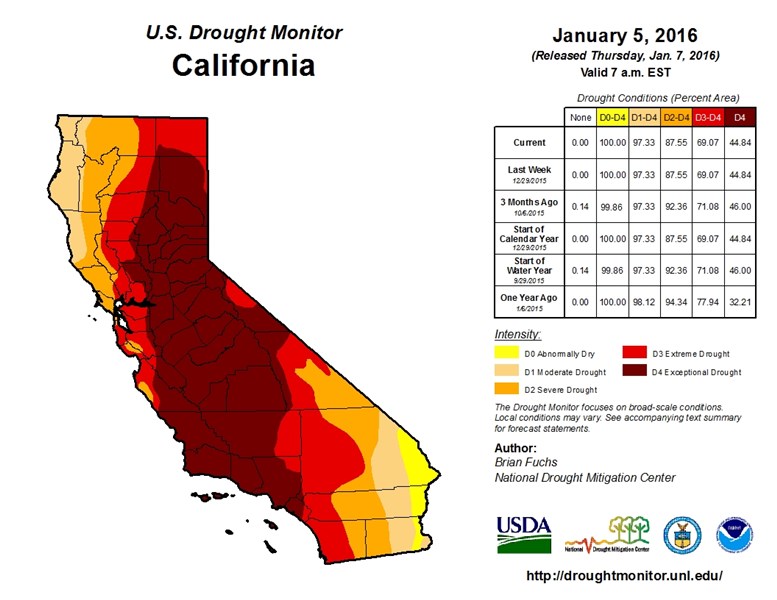 Rippey also says forecasters are optimistic that California's drought situation will begin to improve, as more than half of the state's winter wet season is still ahead and a strong El Nino remains in place. "However, experts caution that effects of California's four-year drought could persist, in part due to long-term factors such as tree mortality, which could lead to future wildfires, and losses of groundwater, which is not always easily replaced," he says. "In addition, California's intrastate reservoirs held just 52% of their normal water volume on Nov. 30, and that number may not appreciably improve until high-elevation snow begins to melt in the spring."

On Jan. 5, 2016, nearly half (45%) of the western U.S. remained in drought, down from 49% in early December. Nearly all (97%) of California remains in drought, unchanged from five weeks ago. Farther north, however, drought coverage during the same five-week period decreased from 96% to 77% in Oregon and from 64% to 25% in Washington, notes Rippey.

Looking ahead, Rippey says the weather outlook features a mild, active weather pattern for the eastern half of the United States. "East of the Rockies, accumulating snow should be confined to an area stretching from the central High Plains into the Great Lakes region, although weekend snow could become heavy in the latter region," he says. "Meanwhile, storm-total rainfall should reach an inch or more in parts of the South, East and lower Midwest. Precipitation will be slow to exit the Northeast, lingering through the weekend. Elsewhere, heavy snow will shift from the Southwest to the central Rockies before ending, although snow showers will return to the Far West-including the Sierra Nevada-during the weekend."