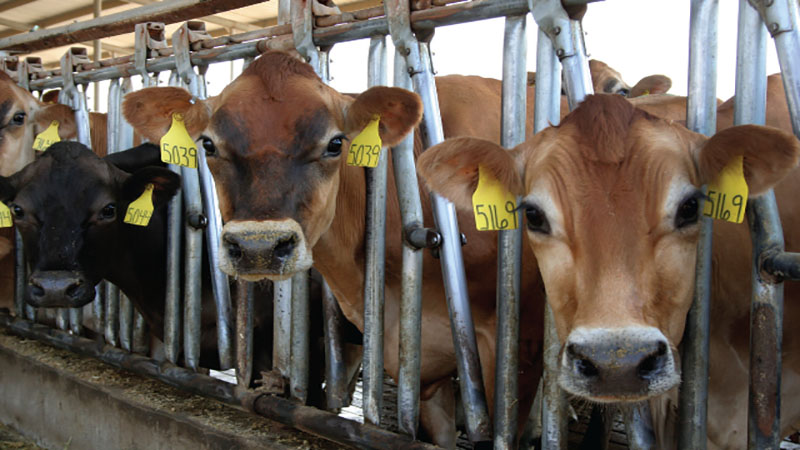 Even though U.S. milk production surged 2.5% in October, shrinking production in other regions of the world and increasing global demand mean milk prices likely will improve significantly in 2017, say University of Wisconsin dairy economists Bob Crop and Mark Stephenson.

“If you look at the U.S., these kinds of numbers would be leading to softness not firmness,” says Stephenson. Twenty of the 23 major dairy states reported increased production in October. Even California, which had declining production for the previous 22 months, saw a 1.8% surge in output in October.

“But milk production is down in all major exporting countries,” says Cropp. And seven of the last eight Global Dairy Trade auctions saw world prices increase, indicating an improvement in demand, he adds.

The United States Department of Agriculture is projecting about $1/cwt increase in the All-Milk Price in 2017. Cropp and Stephenson are even more optimistic, saying they’re projecting a $2 bump in prices over this year.

“The average Class III for the year could be near $16.50, a good improvement over the expected $14.75 this year,” says Cropp. A 16.50 Class III would suggest an All-Milk Price average of $18 or more. Click here for the full analysis by Cropp and Stephenson.

Despite this optimism, there are five wild cards dairy farmers need to watch as they enter 2017 and contemplate risk management options for the year, says Mary Keough Ledman, editor of the Daily Dairy Report.

“The perfect storm for high milk prices occurs when output in the European Union, New Zealand and the United States is lower than historical growth rates,” Ledman says. In 2016, the European Union is down almost 3% and has a milk diversion program in place for at least the first quarter of 2017. New Zealand was also down 5.5% in October year over year. That’s significant because October is New Zealand’s flush when pastures are the most lush and cows are milking at their peak. Of the big three players in global markets, only the United States is seeing increased milk production, up 2.5%. That’s the highest increase year over year since 2014.

The strongest milk production growth is coming from the Dakotas east. Lack of processing capacity in Michigan, Ohio and Indiana means that basis in these states and areas that are absorbing their surplus is weakened until more processing capacity is built. U.S. cow numbers are also at their highest level since 2008.

Because U.S. cheese prices were higher than those in Europe and New Zealand, the U.S. imported a lot of cheese in 2016 and put a share of its own production into inventory. “For much of 2016, cheese markets were burdened by high stock levels. They are not nearly as large going into 2017,” she says.

As noted above, high prices for U.S. cheese and butter made U.S. exports of these products come to a screeching halt in 2016. In fact, U.S. cheese exports in the first half of the year were close to a 10-year low. “In August, there was a convergence of cheese prices between the U.S. and the rest of the world, which stopped cheese from being imported here,” she says. “Going into 2017, U.S. cheese prices are much closer to EU and Oceania prices.”

A strong U.S. dollar against the Euro also did not help U.S. exports. The one bright spot for the U.S. is non-fat dry milk powder prices. Mexico has been a huge market for powder in 2016. “We do not want any walls separating us from Mexico. Mexico is as important an export destination for U.S. dairy products as China is to New Zealand,” Ledman says.

No outlook is complete without talking about the weather, Ledman says. Drought seems to be spreading in the West and Southeast. California, while it has had some rain, remains a trouble spot. In the Southeast, drought seems to be growing in dairy areas that rely on pastures and grazing for much of their forage. The Midwest seems to be the only region to be in good shape when it comes to adequate soil moisture. But again, December is way too early to make any predictions on how weather patterns will play out in the 2017 growing season.

The editors at AgWeb.com are taking a look at experts’ projections for a variety of commodities in 2017 to help you succeed and be profitable in the coming year. Tune in periodically over the next six weeks as we add outlooks for corn, wheat, cotton, cattle, machinery and more. Read all the outlook pieces here.