$39 Million of Investments Planned for 2015 by Beef Checkoff 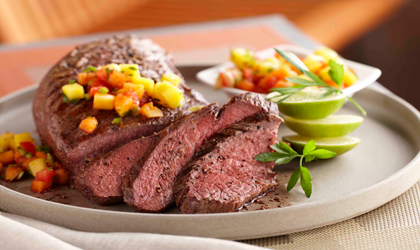 The Cattlemen’s Beef Board will invest about $39 million into programs of beef promotion, research, consumer information, industry information, foreign marketing and producer communications in fiscal year 2015, if this week's recommendation of the Beef Promotion Operating Committee is approved by USDA, following review by the full Beef Board.

In action concluding its Sept. 16-17 meeting in Denver, the Operating Committee — including 10 members of the Beef Board and 10 members of the Federation of State Beef Councils — approved checkoff funding for a total of 18 “Authorization Requests,” or proposals for checkoff funding, in the fiscal year beginning Oct. 1, 2014. The committee also recommended full Beef Board approval of a budget amendment to reflect the split of funding between budget categories affected by their decisions.

"As both a producer and a checkoff leader, it’s rewarding to see the tremendous efforts that go into responsible investment of producers’ and importers’ hard-earned dollars into solid checkoff programs that produce results,” said Beef Board and Operating Committee Chairman Kim Brackett (pictured), a cattle producer from Idaho. “I am truly excited about the opportunities that we have before us as an industry and so pleased that we have our checkoff to take those on.”

In the end, the Operating Committee approved proposals from eight national beef organizations for funding through the FY15 Cattlemen’s Beef Board budget, as follows:

Broken out by budget component, the Fiscal Year 2015 Plan of Work for the Cattlemen’s Beef Board budget includes:

Other expenses funded through the $41.3 million 2015 CBB budget include $221,000 for evaluation, $305,000 for program development, $325,000 for USDA oversight; and about $1.9 million for administration, which includes costs for Board meetings, legal fees, travel costs, office rental, supplies, equipment, and administrative staff compensation. Fiscal Year 2015 begins Oct. 1, 2014.

“These meetings are both a bit of the best of things, and a bit of the worst of things, because we have so many terrific proposals from beef organizations but we cannot fund all of them,” Brackett said. “With our task before us, though, we had two days of active discussion about how to do what’s best for all producers and importers who pay their hard-earned dollars into this checkoff program. I am proud of the plan we were able to put together toward enhancing consumer preference for beef over other proteins in the coming year.”

For details about individual proposals considered by the Operating Committee this week, visit MyBeefCheckoffMeeting.com.