4 Factors That Could Cause Lower Farmland Values

Despite continued, several factors are pointing to some downward pressure on farmland markets.
( AgWeb )

Farmland values in the Midwest continue to stabilize. Agricultural land values for the Seventh Federal Reserve District, which includes the northern two-thirds of Illinois, Indiana, Iowa, the lower peninsula of Michigan and southeastern Wisconsin, were unchanged in the first quarter of 2019 compared to a year ago, according to a recent report from the Federal Reserve Bank of Chicago.

The stability of District farmland values persisted even as the demand for agricultural land softened from a year ago and the supply on the market grew modestly, according to David Oppedahl, senior business economist for the region.

“There are people in rural communities who have really strong balance sheets and are in an offensive position, with the capability of buying land,” reported an Indiana banker.

However, Oppedahl notes, several factors are pointing to some downward pressure on farmland markets. They include:

After adjusting for inflation, cash rental rates slipped 5% from 2018. This was the sixth straight year of declining real cash rents—the longest such downturn since 1981 (when the survey started to track cash rents), Oppedahl reports. 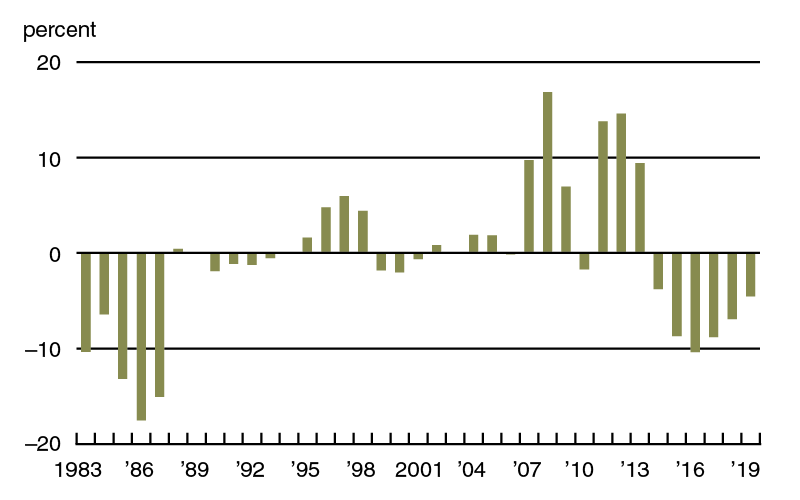 Sources: Author’s calculations based on data from Federal Reserve Bank of Chicago surveys of farmland values; and U.S. Bureau of Economic Analysis, adjusted for inflation by the Personal Consumption Expenditures Price Index (PCEPI), from Haver Analytics.

Agricultural credit conditions weakened again during the first quarter of 2019. There was “a continued working capital erosion for our overall customer base,” reported an Iowa banker.

With the generally low commodity prices and weather disruptions, bankers said 2019 could end up being quite a challenging year for their farmer customers.

With regard to 2018, an Indiana banker commented, “My customers were generally able to meet all their obligations and maintain their financial positions.” But that banker also noted, “This year could get ugly.”

Farmland Values: On A Tipping Point?