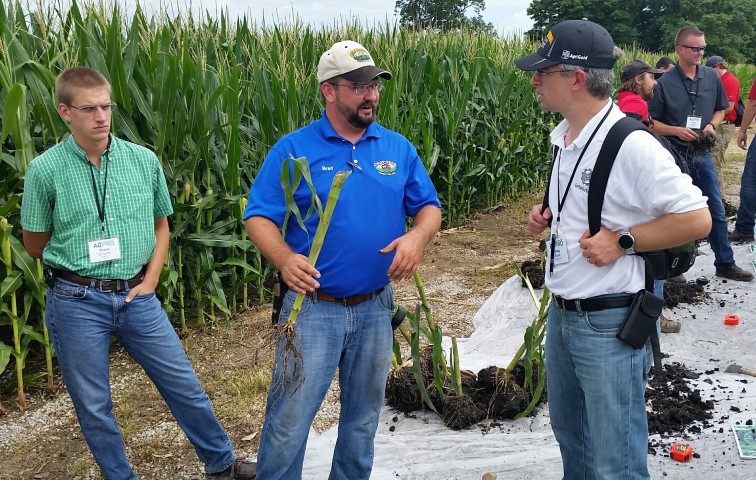 “If you don’t measure, you won’t know where to start.”

That was Brad Beutke’s advice for farmers attending the 2016 Farm Journal Technology field day, held July 19 in Heyworth, Ill. Beutke, an agronomist with Crop Tech Consulting, says farm tech has moved quickly the past few years, especially in regards to data collection, processing and analysis. He shared a few helpful tips that farmers can deploy on their operations to better use these valuable digital assets.

1. Equal area maps are more useful than equal interval maps. Beutke says equal area maps – sometimes also referred to as equal point maps – lets users identify the best and worst parts of any given field, no matter what the actual differences are. An equal interval map, on the other hand, is susceptible to hiding bad parts of the field into an overly broad zone where it doesn’t actually belong.

“With equal area, you’ll always see variability in your maps,” he says.

2. Clip images to field boundaries. If you don’t, surrounding grassways, roadways, waterways and even neighboring fields can skew results of NDVI imagery, especially when the data has been “Kriged” – a method to blend data points in an attempt to tighten up the image resolution.

“It can put a zone in the field that’s not actually there,” Buetke says.

3. Back up NDVI images with a color photo.

“There can be things on that NDVI image that might not make sense without a reference point,” Buetke says. For example, the shadow of a windmill or low-lying cloud could end up looking like a bad spot in the field. A quick check against a color photo will confirm if this is the case, or if there is a real problem worth scouting further.

4. Flying a drone? Collect photos before video. Drones continue to be a hot topic in the agriculture industry, Buetke says. And for new drone owners, the first instinct may be to mount a video camera to your new UAV, fly it up and start shooting HD video of your fields. But unless you have a lot of extra time on your hands, start with photo collection instead.

“In an 80-acre field, aim to get between eight and 10 high-quality photos,” Buetke suggests. “You can get a lot of insights in a short time by flipping through them, as opposed to downloading and watching 20 minutes of video.”

5. Buying a drone? Manage your expectations. Realistically, you probably don’t have time to collect images and process them over hundreds or thousands of acres, Buetke says. That doesn’t discount its value on the farm, however.

“A drone as a scouting tool and for research purposes is still probably a good idea,” he says.

6. Use images to figure out what to do next. If you take images early enough in the season, you can make any number of same-season management decisions. But even later season images can prove quite useful, Buetke says.

“If you use aerial maps against final yield maps, you can figure out what happened to explain any difference between the two and make adjustments in years to come,” he says.

Interested in attending a future Farm Journal College event? Get the full listing of additional offerings at http://bit.ly/corncollege.