9 Tips to Get the Most Out of Your Sprayer 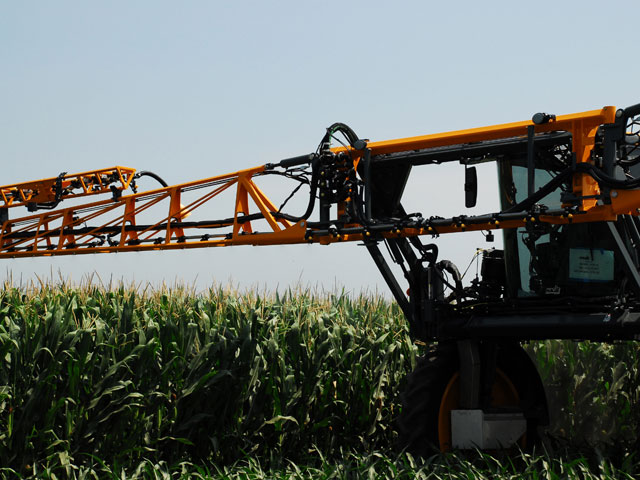 Using clean water when calibrating a pesticide sprayer and carrying extra nozzles for quick repair of simple problems in the field are just some of the tricks of the trade that can help growers save time, energy and money during spraying season, says a spray technology expert in the College of Food, Agricultural, and Environmental Sciences at The Ohio State University.

Because there are so many things that could go wrong when using a sprayer, growers need to take extra time to ensure they know the right techniques to keep their sprayers performing in optimum condition, according to Erdal Ozkan, an agricultural engineering professor with Ohio State University Extension and the Ohio Agricultural Research and Development Center.

OSU Extension and OARDC are the outreach and research arms, respectively, of the college.

With the rising cost of pesticides and fertilizers, growers who want to save money and spray chemicals as efficiently as possible need to make sure they choose sprayers that work as accurately as possible and get the job done with less use of chemical inputs, he said.

“Spray application requires more managerial decisions than any other farm operation because a lot of things could go wrong with a sprayer that you don’t know are going on,” Ozkan said. “For example, a nozzle could be clogged and the only way you can find out is by calibrating your sprayer.

“If you’re spraying more pesticides than you need, you’re wasting your money, and if you aren’t applying enough, you may have to go back and respray your entire field.”

Those are the kinds of mistakes that could result in poor performance of the pesticide and cost growers time and money to reapply to the entire field, he said.

Your Guide to 7 Step Sprayer Prep

Most machines coming out of storage require a little TLC. Learn what preventative measures you can take to keep your machines running smoothly.

“Paying attention to the application rate, travel speed, spray pressure, nozzle selection and spray drift will lead any grower to a successful outcome — which is the efficient and effective control of pests,” Ozkan said.

The costs of wasted chemicals can be high. Farmers spend approximately $4.1 billion on pesticides annually, according to published reports.

“There are also environmental concerns to be aware of that can cause unintended problems such as spray drift or application of pesticides in certain areas that could cause chemicals going into waterways,” Ozkan said. “That is why calibration is so important.

“It’s not only how much you apply but how uniformly you are spreading it over the target.”

In a recent CORN newsletter posting, Ozkan offers the following tips that can help growers get the most out of their sprayers:

1. Know what kind of nozzles are on your sprayer and whether or not their patterns need to be overlapped for complete coverage. Make sure the nozzles are not partially clogged, and never use a pin, knife or any other metal object to unclog nozzles.

2. Nozzle tips with different fan angles on the boom and uneven boom height are the most common causes of non-uniform spray patterns. They can all cause streaks of untreated areas that result in insufficient pest control and economic loss.

3. Setting the proper boom height for a given nozzle spacing is extremely important in achieving proper overlapping. To achieve uniform coverage on the entire swath of the sprayer, conventional flat-fan nozzles require 30 to 50 percent overlapping of adjacent spray patterns. Check nozzle catalogs for specific recommendations for different nozzles.

5. Pay attention to spray pressure. Variations in pressure will cause changes in application rate, droplet size and spray pattern. At very low pressures, the spray angle will be noticeably narrowed, causing insufficient overlap between nozzle patterns and streaks of untreated areas. High pressure will increase the number of drift-prone droplets.

6. Avoid spray drift by not spraying when the wind speed is likely to cause drift. Keep the spray pressure low if it is practical to do so, or replace conventional nozzles with low-drift nozzles. Also keep the boom close to the target, use drift retardant adjuvants, and spray in early morning and late afternoon when drift potential is less.

8. Calibrate your sprayer periodically during spraying season to keep it at peak performance.

9. Be safe. Read the chemical and equipment instructions, and follow them. Wear protective clothing, rubber gloves and respirators when calibrating the sprayer, doing the actual spraying and cleaning the equipment. Be well informed about the specific recommendations for a given pesticide, and follow the laws and regulations on pesticide application.