by Linda H. Smith
05:25PM Jun 04, 2010
( )
As June started, the BP oil spill finally had a noticeable impact on the front end oil futures. It drove them lower—not higher because of less oil being delivered to the market, reports Phil Flynn of PFGBest. "Oil futures got hammered as BP stock was obliterated and the 'top kill' procedure in the Gulf spill was deemed a failure. The day of the Deepwater Horizon explosion, oil prices closed at $83.45/barrel; June 1, they closed at $72.48. "The market never knew that this oil existed and never counted on this oil,” Flynn says.
"Besides, the market has been focused on demand expectations and issues such as whether or not the Euro zone is going to fall apart, whether the global economy is going to go into a double-dip recession, and the fact that the U.S. dollar has regained some of its stature against the battered and shaky euro currency.”
Longer-term, though, the spill will hurt future U.S. oil production offshore and may mean expensive regulations and taxes. "This disaster of biblical proportions—even if they manage to cap it in two weeks or a month—has got to have the government thinking about an even stronger support for green energy,” says Jim Bower of Bower Trading. "I have to think this will push the EPA in the direction of raising the ethanol standard sooner rather than later—and perhaps higher than was otherwise in the cards.” 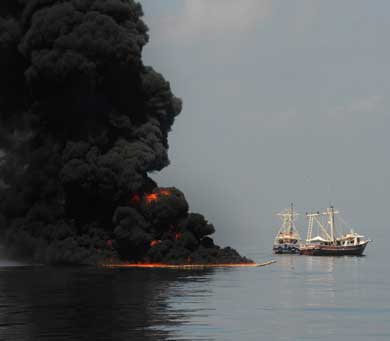