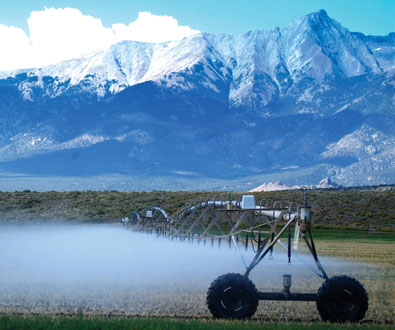 The U. S. uses less water today than it did 35 years ago, despite a 30% population increase. Declines in water use are partly attributable to more efficient irrigation systems and alternative cooling methods at power plants, according to a recently released U.S. Geological Survey report.

The report, "Summary of Estimated Water Use in the United States in 2005,” states that Americans used 410 billion gallons of water per day in that year, slightly less than what was consumed in 2000.

"Because electricity generation and irrigation together accounted for a massive 80% of our water use in 2005, the improvements in efficiency and technology give us hope for the future,” says Anne Castle, Assistant Secretary of the Interior for Water and Science.

The report concludes that irrigation accounted for 31% of total withdrawals and 37% of freshwater withdrawals. Even though the amount of irrigated acres has increased, irrigation application rates have steadily decreased—a change that the report's authors attribute to the increased use of more efficient irrigation systems.

"We are pleased to see that irrigation efficiency played such a major role in decreasing our nation's overall water use,” says John Farner, director of federal affairs for the Irrigation Association. "As our nation's population increases, the demand for food will increase, as will the amount of Americans owning homes. We will need to do more with less in the future than we've ever had before.”

The full report is available at http://water.usgs.gov/watuse.

Rental agreements for irrigated farmland should be designed to consider the ownership of the equipment.

A fair lease requires that the contributions of each party be identified and assigned a dollar value. These contributions include land, labor, capital, management and variable costs.

Irrigation investments can complicate a lease arrangement. Crop-share rental agreements often share variable costs, such as seed, fertilizer, pesticides and harvest drying. If the landowner does not own all of the equipment, tenants may be hesitant to purchase equipment. Writing a longer-term lease, specifying the parties responsible for repair costs, etc., may help to alleviate concerns.