A Diversified Road to Weed Control 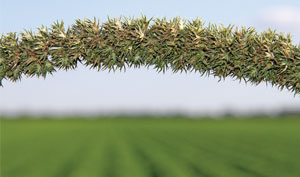 Within a few years, the hopes of blanket weed control had faded, dimmed by the reality of herbicide resistance. The future of sustainable weed strategies is anchored in diversification, according to two university weed scientists.

“Growing up on a farm, I know that pre-Roundup Ready, we were dealing with one weed problem or another,” says Jason Bond, a Mississippi State University weed scientist. “I look at the future with realism, and it’s true that we’ve got some unique weed problems, but I think people forget how tough things were 30 years ago.”

Larry Steckel, a University of Tennessee weed scientist, echoes Bond: “Even before the introduction of glyphosate, Palmer amaranth was on the cusp of overwhelming agriculture, and farmers were struggling. It’s fair to say that pigweed was already on the way toward changing agriculture since it had resistance to ALS inhibitors, Treflan and atrazine.”

Palmer amaranth—or pigweed, the poster child of herbicide resistance, is a constant reminder of failed weed management. Pigweed is capable of jumping 2" to 3" daily and can pass out of a controllable stage in 24 hours. The logistics of controlling pigweed post-emergence are nearly impossible, and any farmer ignoring a pigweed break-out is set to get steamrolled.

“The pigweed march won’t be stopped, and the cat’s out of the bag in the Midwest—Illinois, Indiana, Iowa, Michigan and Nebraska,” Steckel says. “However, farmer attitudes have also changed in the past five years. If you’re still farming, then you’re a believer, and the days of denial are gone.”

Denial of weed trouble is usually due to input costs, finances and time, Bond adds. “Time is money, and it takes more time to fight resistant weeds. Weed control must be a 12-month system that demands attention.”

Input costs are the linchpin on most operations. Since 2006, seed costs have risen 45%; fertilizer costs, 48%; and herbicide costs, 250%, according to a farmer working with Steckel.

“It’s never going to be easy, but I’m optimistic that farmers are now doing what they can through a diversified weed control approach. That will be far more sustainable than relying on a single herbicide,” Steckel says.

“I think the industry is doing a good job dealing with resistant weeds,” Bond adds. “You can see cultivation mixed back into weed management schemes when it’s appropriate.”

Weed resistance lessons must be remembered, regardless of what new herbicides hit the market. “With 2,4-D and dicamba technology that’s coming out, I don’t think resistance will build as quickly as it did with Roundup because they’re not as good as Roundup,” Steckel notes. “Good weed control with those technologies requires continued use of pre-emergents, multiple modes of action and cultural practices—just to get the same Roundup results from 10 years back.”