A Global Look at Cropland 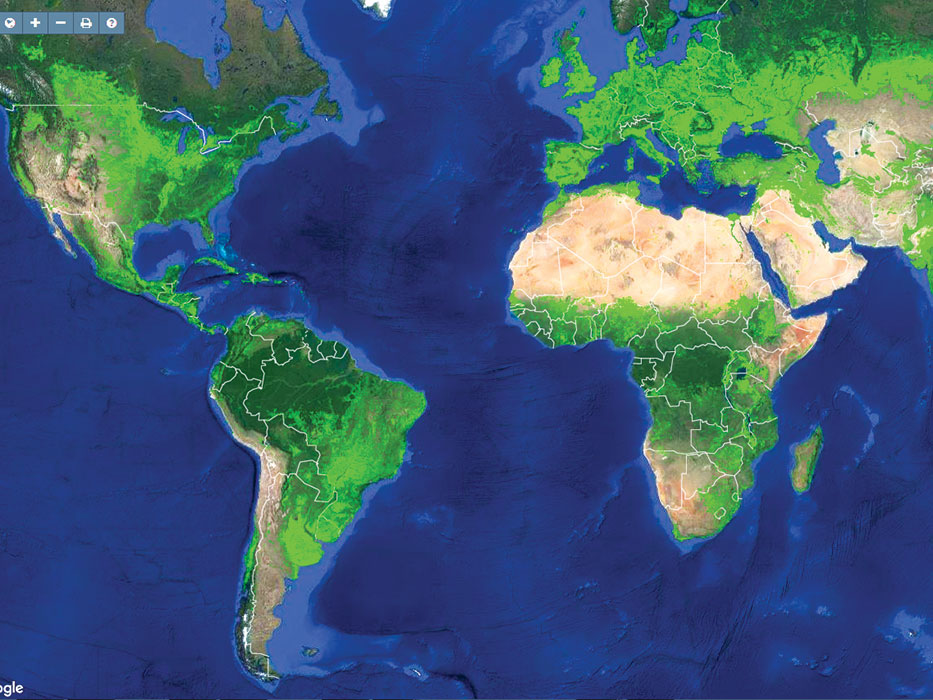 In an ongoing effort to monitor cropland and water use, the U.S. Geological Survey (USGS) has released a worldwide map that details cropland in high resolution. The interactive maps are part of the Global Food Security-Support Analysis Data at 30 meters (GFSAD30), a NASA-funded project to provide high-resolution global cropland and water use data that contributes to global food security in the 21st century.

The map establishes there are 1.87 billion hectares (4.62 billion acres) of cropland in the world, which is 15% to 20%—or 700 to 900 million acres—more than former assessments. The change is due to more detailed understanding of large areas never mapped before or inaccurately mapped as non-croplands.

The map is built primarily from Landsat satellite imagery with 30-meter resolution, which is the highest spatial resolution of any global agricultural data set. The GFSAD30 products are derived through multi-sensor remote-sensing data, secondary data and field-plot data, and aims at documenting cropland dynamics from 1990 to 2017.

“The map clearly shows individual farm fields, big or small, at any location in the world,” says Prasad Thenkabail, USGS research geographer and principal investigator for the GFSAD30 project team. “Given the high resolution of 30 meters and 0.09 hectares per pixel, a big advantage is the ability to see croplands in any country and sub-national regions, including states, provinces, districts, counties and villages.”

With the global population nearing the 7.6 billion mark and expected to reach 10 billion by 2050, the researchers say it is of increasing importance to understand and monitor the state of agriculture across the world in great detail. This research is useful to international development organizations, farmers, decision-makers, scientists and national security professionals.

“This map is a baseline for higher level assessments, such as identifying which crops are present and where, when they grow, their productivity, if lands are left fallow and whether the water source is irrigated or rain fed,” Thenkabail says. “Comparisons can be made between the present and past as well as one farm and another.”

Not only does this map and data have significant food security implications, but it is also critical as a baseline for assessing water security. Nearly 80% of all human water use across the world goes toward producing food, and this research provides insight on “crop per drop,” which is an assessment of the amount of crops produced per unit of water.