A Great Dairy Conference a World Away 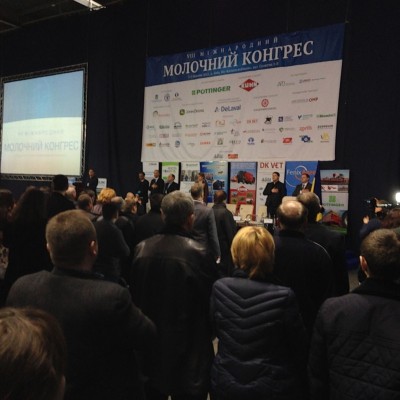 What do you look for in a valuable dairy conference? You would likely be interested in discussions of current issues, emerging technologies, and management strategies by successful producers and knowledgeable people in academia, industry, and government. In addition, a trade show where you can talk with industry representatives about products and services might be high on your list.

That would all describe the VIII Ukrainian Dairy Congress held in Kiev, Ukraine March 3-5 and at which two of my Michigan State University Extension colleagues, Stan Moore and Phil Kaatz, and I were invited to participate as speakers. The Congress (or “Conference” in our terminology) had sessions over two days with general sessions on economics and policies and breakouts sections on management and technologies, veterinary issues and milk processing.

More than 900 attended the Dairy Congress. The list of issues they addressed the first morning in a general session could have been taken from a U.S. dairy conference – it included milk price forecast, opportunities and limitations of increasing the export of dairy products and dealing with regulations. These issues were addressed by leading officials and experts.

Wisconsin dairy producer, Lloyd Holterman of Rosy Lane Holsteins, was also on the program to share his management experience and how they achieve high performance. Genetics, heifer health, vaccination, nutrition, grouping strategies, feed storage and more were some of the topics covered in sessions by speakers from Ukraine and five other countries.

I was invited to speak on two topics: “Dry Cow Management” and “Integrity in Business”. While the second topic might seem a surprise, understand that Ukraine for years was part of the Soviet system that doesn’t put a priority on truth or fairness. This is one of the reasons for the revolution last year to align with the west and the openness that is inherent in democracy. Unfortunately, the legacy of that way of doing business lingers on, yet there is a desire to change.

All presentations were translated by a linguist in a booth off to the side in each room. Participants could get a receiver and an earphone to listen to the translation.

A trade show had representatives, displays and equipment from 56 companies including field equipment, milking and dairy barn equipment, supplies, seed, feed, veterinary supplies, a lender and a law firm. Aside from the fact that everything was in Russian or Ukrainian language, you would have enjoyed seeing and talking about the products and services.

The third day of the Congress was devoted to visiting two farms approximately an hour’s drive from Kiev. The first farm milks 585 head using a 32 stall rotary parlor. At the second farm, a total of 925 head of Ukrainian black and whites, Ukrainian red and whites, and Holsteins were milked at two sites. At one site 400 were milked by DeLaval robots and 525 cows at the other site were milked in a 2 x16 parallel parlor.

Production at the farms was less than what we would expect for a U.S. dairy: 17,637 lbs. and 21,785 lbs. respectively. These, however, were examples to other producers of better management.

In 2014, I had spoken at the VII Congress in the days following the revolution in Kiev. It may seem that this year would be a more stable time than that year, however, the VIII Dairy Congress was held while the country and the dairy industry are in upheaval and even danger. In a separate article, “Ukraine dairy - A time of crisis”, I discussed the context of this Dairy Congress in terms of what is going on in the country and the economy.

My colleagues and I consider it a privilege to have been a part of this Dairy Congress and provide some help to the producers and advisors with the Ukrainian Dairy Producers Association there.