A Question of Handler Personality Type 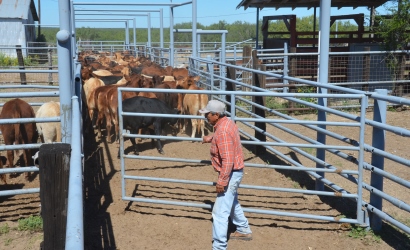 Have you ever wondered why cattle may work great for one individual and then completely blow up when a different individual works them?
By: Heidi Carroll, Livestock Stewardship Extension Associate, SDSU Extension

Have you ever wondered why cattle may work great for one individual and then completely blow up when a different individual works them? Low-stress cattle handling provides performance and health benefits, minimizes carcass losses due to bruising or dark cutters, and minimizes injuries to handlers and cattle. Identifying persons that may have a greater inborn ability to handle cattle in a low-stress manner would be useful in feedlots and on ranches. A small study was conducted at South Dakota State University to determine whether handler personality type would be a useful tool to predict stockman abilities.

So why handler personality type? Since cattle respond differently during handling for different individuals, the question becomes whether the resulting responses are due to the training or experience level of the individual, or due to other personal characteristics. Personality type was chosen since it tends to be stable over time and influences many aspects of behavior and decision making.

Three cattle handling exercises were created to observe human-cattle interactions. In Exercise 1 handlers read and recorded ear tag numbers on 4 predetermined steers with paint-brands on their left hip. Exercise 2 required handlers to sort the steers within their home pen into 2 equal groups that remained clearly separated for at least 10 seconds. Exercise 3 involved moving the steers to a dead-end alley and sorting them back individually.

A scoring system was developed to investigate cattle handling proficiency based on cattle behavioral responses (Table 1). The score (SCORE) was the sum of 6 behavior traits: Attention, Fence contact, Curiosity, Excitability, Footing, and Movement. Other behavior traits were considered, but not used due to their relationship with other behavior traits.

The study indicated that a relationship between handler personality type and the behavioral responses of cattle may exist. Exercise 1 was not helpful to differentiate handlers, but other exercises showed potential to be useful. However, further research is needed to determine the pertinent cattle handling exercises and the cattle behaviors to include in a cattle handling proficiency scoring system.

This study reminds us that the people working with our livestock can be influential to the success of the operation. Next time you are out working cattle, take a few observations of how the animals are responding to each person helping. Remember, each human-cattle interaction can have either a positive or negative impact on the cattle’s well-being and subsequent performance.

The full Beef Report article can be found at the SDSU Beef Reports page.