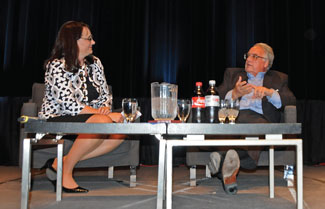 FJ C6 F14325 R1
( )
During the 6th World Congress on Conservation Agriculture in Winnipeg, Manitoba, farmers and conservation experts were able to participate in a lively discussion with Howard G. Buffett.

Known as a no-nonsense farmer and visionary philanthropist, Buffett shared his perspective on the need to adopt practices and mind sets that can help feed the world’s hungry. Since 1999, Buffett’s foundation has supported more than 250 agricultural and food security projects in 49 countries in an effort to improve the standard of living and quality of life for the world’s most impoverished and marginalized populations. Farm Journal Editor Charlene Finck led the entertaining and thought-provoking question-and-answer session. Here are several excerpts from the discussion.
Q: Being a U.S. farmer and having the passion you have for conservation as a farmer, it would be helpful to have your perspective at the World Congress on Conservation Agriculture on where you think U.S. farmers rank in the adoption of conservation practices?
A: I would say it’s possible that U.S. farmers are getting passed up in certain respects globally, and they don’t like to hear that. One of these days, Brazil is going to beat us on soybean production, and we should be asking why and how are they doing it.  Countries such as Brazil, Argentina and Australia are, on a percentage basis, really beating us. The reason is because we have a mind set that’s kept us trapped in thinking like our dads and grandfathers.  The thing that drives me nuts is when someone says things like "I tried no-till for a year, and it didn’t work." There are so many variables to farming, there’s no way you can base a decision like that on one year.
Q: What has been one of your biggest frustrations in adopting conservation agriculture, and would that parallel what you believe other farmers experience?
A: Management is a huge challenge.  Conservation agriculture can require equipment changes and different manpower demands. Everyone struggles with management.
Q: In your opinion, what is at stake if farmers in the U.S. and around the globe don’t master conservation practices?
A: What’s going to happen is we’ll lose choices.  The political landscape is changing in the U.S., and it’s not changing in favor of the farmer in any way, shape or form. The biggest collision I see coming faster than anything is with water. I’d love to be wrong about this, but I don’t think I am. Historically, all of the legislative battles that have been supported by agriculture have been won by agriculture, but when you get huge urban areas with large populations demanding water, we’re going to lose those battles. The numbers always win.
Q: What should government be doing to keep us from going down the collision course?
A: The government has to be a willing participant for there to be change. It’s refreshing to see young guys in USDA who really believe in changing how we farm in our country, though it’s a slow process. It gives me hope when I go to conservation conferences such as this one where there are people who understand and believe in this. There are way too few of us but it’s a start.

The 6th World Congress on Conservation Agriculture, held in late June in Canada, gave nearly 400 participants from 51 countries the opportunity to learn more about designing a conservation agriculture system. To read abstracts and presentations from the event, visit www.wcca6.org