A Tale of Two Soils

The farmers of the two tracts use similar practices—no-till and a mostly corn/soybean rotation. The primary difference is that Farm A has been no-tilled for 30 years, and Farm B for only two years. Prior to that, it was farmed using horizontal tillage.

Perhaps you’ve seen similar yield differences in your own fields and wondered why one area yields more corn than another. Modern testing tools can help you pinpoint the culprit. On Farm B, the lower yields can be linked to poor soil health.

Farm A and Farm B are real. Farm Journal Field Agronomist Ken Ferrie has been working with Farm B for four years, helping the farmer restore soil health in order to boost yields.

In the beginning, Ferrie used soil pits and visual observation to evaluate soil health. But now, simple on-farm tests let him and any farm operator give the soil a "physical exam." The tests provide numerical soil health ratings, which serve as benchmarks for evaluating soil health improvements.

Ferrie gave both farms a physical exam this past spring. "Because of the difference in soil health, the best soil on Farm B still can’t yield as well as the poorest soil on Farm A," he says.

"In some cases, it might be possible to fix physical and chemical problems fairly quickly. Often, improvements take many years, especially when the biological component is involved. Even so, the 70-bu. yield difference between the two farms shows that improving soil health is worth the effort."

A physical exam—just like the one your doctor gives you—begins by assessing the farm’s appearance. Even after four years of effort on Farm B, the visual differences were still striking.

A glance at the soil surface revealed part of the reason why water is infiltrating into the soil on Farm A but running off the surface on Farm B. There were thousands of night crawler burrows visible beneath the residue on Farm A but almost none on Farm B. "Among the benefits of night crawlers, their burrows allow water to infiltrate the soil," Ferrie says. "They also help remove excess water, functioning like part of your drainage system."

Part of the reason water couldn’t infiltrate the soil of Farm B was its degraded structure. Digging revealed impenetrable blocks of soil, compared with Farm A’s healthy crumb-like soil structure containing macropores for water and air.

Another symptom of poor health, visible on the surface of Farm B, was two years’ worth of old crop residue. Not only was 2012’s soybean residue present, but even the fine leaves, husks and silks, which should be among the first and easiest to decompose, were present from a corn crop grown two years ago.

"That indicates a biological problem because residue is decomposed by soil organisms," Ferrie says. "The absence of night crawlers is one of the indicators that confirms it."

A slake test, which involves immersing surface soil in water and seeing whether it holds its structure, produced scores of 2.7 for Farm B’s silt loam and 5.0 for its silty clay loam, compared to 3.7 and 5.7, respectively, for the same two soils on Farm A. The higher the score, the healthier the soil structure and the less chance it will seal over during a rainstorm and restrict infiltration.

Zerebny used a rainfall simulator, available from Cornell University’s Soil Health website, to analyze aggregate stability or structure in the top 6" of soil. It revealed that structural problems on Farm B are not limited to the surface of the soil.

Health quest. Ferrie’s examination of the results showed that the operator of Farm B needs to continue to focus on physical and chemical issues to improve soil health. The operator is using vertical tillage tools to remove hardpans, compaction and tillage layers.

Vertical tillage and liming work together to fix structural problems. "When a field gets extremely acid, acidity destroys structure and stops water infiltration," Ferrie says. "When we apply lime, we are attempting to flush out the acidity. If we have poor infiltration, we can’t get water into the soil to make the lime work.

"Applying lime, (calcium carbonate) helps fix structural problems and keeps pH in the 6.3 to 6.5 range, which is optimal for soil microbial activity. The carbonate bonds with hydro­gen (acidity) and helps flush it out of the soil."

"Together, vertical tillage and lime applications will let us gradually build up soil pH from the 5.0 range, where it was when the operator took over the farm," Ferrie says. "Eventually, after soil health improves, he will no-till Farm B just like his other farms."

Cover crops are also part of Farm B’s recovery plan. Deep rooting crops can penetrate some hardpans and compacted layers. The roots of grass crops aid in the process of producing a glue-like substance that helps bind soil particles together.

In fall 2012, the farmer’s initial attempt to aerial seed a cover crop of annual ryegrass and tillage radishes failed, apparently because of environmental conditions. That illustrates how resuscitating abused soil takes a long time—probably decades for Farm B.

Regardless, gradual improvements in soil health will lead to gradual improve­ments in yield, Ferrie concludes. They will also lead to healthier water sources because of fewer nutrients washing away and a more sustainable farm for future generations.

Building on the Systems Approach, the Soil Health series will detail the chemical, physical and biological components of soil and how to give your crop a fighting chance. www.FarmJournal.com/soil_health 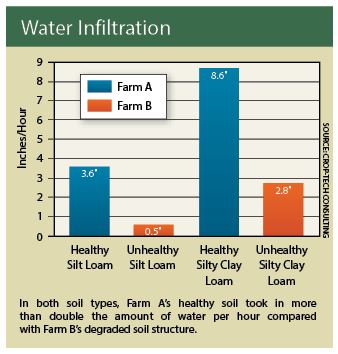 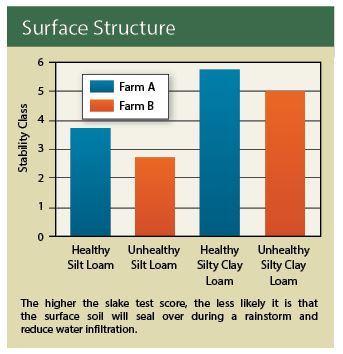 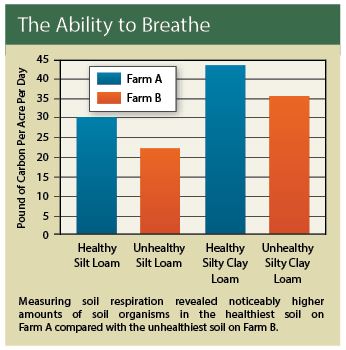