A Visit to Claas HQ in Harsewinkel

Total, the company has 9,000 employees with 14 factories and production facilities. Claas has invested in new facilities in Omaha, Neb., Russia, and India with the purpose to producing machines where they will be used. 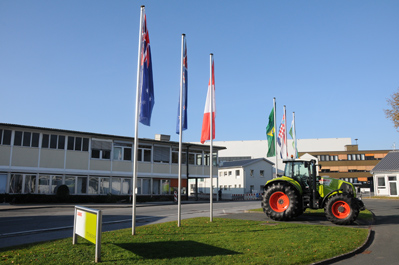 In Harsewinkel, the company has manufacturing, engineering, marketing and corporate leadership.
The manufacturing facilities there produce self-propelled forage harvesters, Xerion machines, and combines for western Europe as well as threshing modules for other markets.
The automated paint process runs 24 hours a day and includes 13 dips tanks with assembly frames that hold up to 22,000 lb. The power coat paint is set in a dryer that is 356 degree F. There are 132 pounds of paint on a Lexion combine, and 66 pounds of paint on a Jaguar forage harvester.
Parts and components are hung on conveyor systems that feature 3 levels of moving lines totaling 8 miles.
There are two assembly lines for combines (one for small frame machines, one for large frame machines), and one combine is started every 30 minutes. It takes one day’s time to assembly a combine, and the factory produces 18 to 19 combines a day. A Lexion has 40,000 parts and components. Each completed machine is tested for 15 minutes.
There is a one assembly line dedicated to Jaguar forage harvesters, and there are 16 machines on the assembly at a time. It takes 1,280 minutes to complete the assembly, and the company produces about seven a day. Each completed machine undergoes 80 minutes of testing.
The company produces 300 to 500 Xerion machines a year. The series is available with three cab position options: Trac, fixed in central position; Trac VC, cab rotates 180°; and Saddle Trac, fixed over position of the engine. Powered by a Caterpillar six-cylinder engine, this tractor can be used for tillage, planting, mowing, spraying, high-capacity manure work, silage pit work and grain or silage hauling. The Xerion 3800 features a continuously variable ZF transmission, permanent four-wheel drive, 100% front and rear differential lock and a 100% central differential lock.
Since they are not marketed in the U.S. some farmers do not know Claas makes tractors. The company acquired French tractor company Renault in 2003, and today they make 12,000 to 14,000 tractors a year. Models range from 60 hp to 400+ hp. 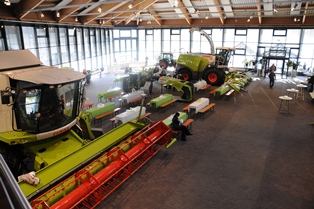 The company welcomes up to 27,000 visitors every year. The TechnoPark visitor’s center including displays of current machinery models as well as the Claas Museum.
Link to the museum. Here are some of the machines on display:
This Claas Super is a 1949 model year and machine No. 1926. There were 65,000 Super machines were produced and sold worldwide between 1946 and 1987. 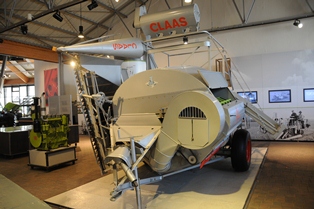 The Claas Hercules was the first self-propelled combine developed and manufactured in Europe. This is machine No. 13 and model year 1953. 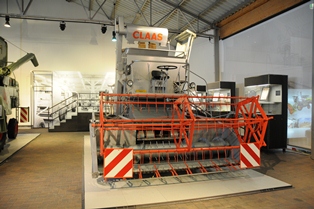 The Claas HuckePack was designed as a multi-tasking machine as a combine harvester, implement carrier and tractor. It was the world’s first of its kind. This is a 1957 model and is machine No. 52. A total of 32,000 machines were produced. 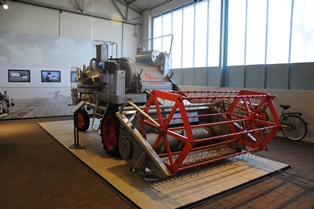 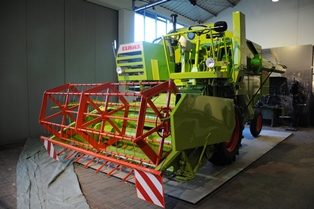 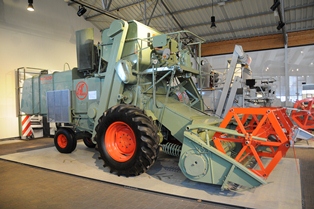