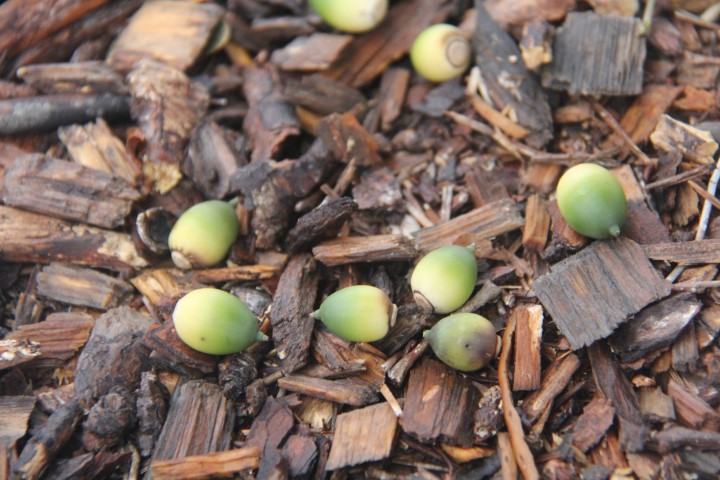 Should you be worried about acorn poisoning in your cattle?​
By: John Cothren, North Carolina Cooperative Extension

I know there are many people out there, like myself, who enjoy the cooler temperatures of fall.  Even the livestock in the fields and pastures enjoy the annual escape from the oppressive summer heat.  But with the cooling of the season, there are a few dangers for our pasture animals that need to be avoided.

Some years, acorns.  While this is good for wildlife, where cattle are frequently grazed on pastures that may contain oak timber, the possibility exists for cattle to also consume acorns.  Most species of North American oak trees are considered toxic.  If these acorns are over-consumed, they have the potential for fatal poisoning.  The toxic compound in acorns is related to tannic acid, and is thought to be a gallotannin (or possibly a metabolite).  One mystery is why cattle can be poisoned.  Hogs, deer and squirrels seem to shell acorns and because the toxin is concentrated in the shell, this may explain their resistance to poisoning.  They may also learn (or maybe naturally select) to not eat too many.

Typically acorns are not a favorite food for most cattle.  If they have plenty of pasture to graze, acorn toxicity is usually not a problem.  However, sometimes there is a cow that, for whatever reason, just seems to love acorns and will gorge themselves on them.  Some cattle can apparently eat acorns with no ill effect, while others develop kidney and digestive problems that can lead to death.  Generally, cows and large calves will be directly affected, but baby calves also appear to be affected through the milk and possibly before birth.  Brood cows consuming acorns during the second trimester of pregnancy have the chance of malformed calves.  Acorns can also cause agalactia (no or little milk) in fall calving cows.  Affected cattle will first show signs of constipation, followed by an abnormally (dark or yellowish) colored thick diarrhea, sometimes with blood.  Clinical signs of illness occur several days after consumption of large quantities of acorns in the fall.  Most cattle that have the advanced gastrointestinal problems will lose condition rapidly, and have a gaunt, rough, “humped up” appearance with a diarrhea stained tail and rump.  In mild cases, gastrointestinal distress may be the only result, and the affected animals will sometimes recover. In severe cases, kidney damage (tubular necrosis) occurs, and animals can die within several days.

The best way to prevent acorn poisoning is to keep cattle away from acorns.  If pastures contain a substantial number of oaks, the trees should either be removed or cattle fenced out, but if you fence off an area covered with acorns, you may have to leave the fence up for a while. Acorns retain high levels of tannic acid for several months.  An alternative would be to set up a management program that will keep cattle off those pastures from the time acorns start to fall, until several weeks after the leaves have fallen.  There is also a grain/protein based supplement containing 10% calcium hydroxide (hydrated lime) that has helped in some situations, but not in others, and probably should not be an alternative to designing a program to keep cattle from eating acorns.