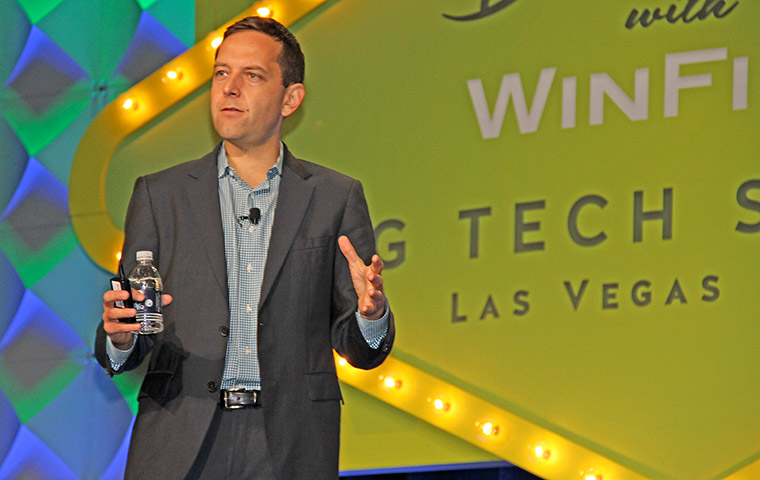 Precision technology has become the core of modern production, and few industries have as much skin in the game as agriculture. As the world wakes and warms to the possibilities of big data, the agriculture industry is keenly aware that opportunities will play out in their backyard –- successes and failures on the farm.

"Big data and precision ag technology will be the most exciting front in technology for global agriculture for at least the next 20 years," says Mitch Eviston, WinField senior vice president, speaking at the 2014 Ag Tech Summit, Las Vegas. "Big data and precision ag will rival, and probably surpass, what we’ve seen as far as productivity improvements in food production around the globe in the next 20 years."

In 1965, Intel cofounder Gordon Moore predicted that the number of transistors on integrated circuits – basically microchips – would double every two years. Labeled as Moore’s Law, the prediction has been bolstered over the last 50 years as microchips have accelerated in power and diminished in scale. However, despite his prescience, Moore could never have known the seismic impact his forecast would have on agriculture.

New tools, devices, apps, and precision machinery are spilling onto the agriculture front at staccato pace, all pumping out a tangle of data in vast, numbing quantities. It cost almost $200,000 to store a gigabyte of data in 1980, but in 2014, the cost has dropped to less than 4 cents. Storage, transfer and quantity are no longer data barriers and the ramifications for agriculture extend to a variety of arenas, says David Friedberg, chief executive officer, The Climate Corporation. "Just 10 years ago it was impossible to get Doppler Radar imagery, but today anyone can go to a website provided by the National Weather Service and get a data stream of every Doppler Radar site – all 180 in the U.S. All the infrastructure that the NWS has invested in building the Doppler Radar network and weather stations is freely available."

Moore’s Law is pushing deep into agriculture, as Friedberg explains, "Toaster-sized satellites are going up in space. They cost little to nothing to get up and can capture imagery of the entire Earth. Within the next seven years, we will have a nearly real-time feed of every point on Earth that anyone will be able to access. Also, the prices we’re starting to see in the drone market indicate there will be an incredible amount of data pouring out. Monitors in tractor cabs are generating tremendous amounts of data."

Despite ample data generation, transmission and storage –- how will agriculture create value? Aaron Ault, who farms 3,000 acres of corn, soybean and wheat, believes the real value of data from a farmer’s perspective is the ability to evaluate farm decisions and subsequently make increasingly informed choices. Ault, who also serves as a senior research engineer with the Open Ag Technology Group, Purdue University, says pain and confusion surround a glut of ag data for agriculture, creating a haze where farmers are grasping for specifics. "Farmers ask, ‘Why do we need data?’ They’ve been doing this for three or four years and it has lost its novelty. The industry tells farmers data is needed for success – whatever that means. Success is nice, but how do we get there?"

Ault believes data problems can’t be solved without cloud cooperation and points toward the Open Ag Data Alliance (OADA) as a solution. Currently, multiple clouds portend multiple problems for farmers, but if a given cloud was OADA-compatible, a farmer or consultant could point their app and let OADA do the work. In essence, OADA specifies how data gets into, out of, and between clouds. "OADA is not a cloud or a place. It is a way for clouds to communicate and for apps to communicate with clouds. This will allow the farmer a choice of who he wants to be his cloud provider," describes Ault. "The farmer doesn’t want to handle data; he wants someone else to do it for him. If clouds can speak to each other, the farmer can just point at other clouds and they can sync everything down automatically and make everything available to whoever he chooses."

OADA tools aren’t tied to storage and any OADA-compliant app can communicate with any OADA-compliant cloud. Producers will have complete control over who gets access to their data. "The way farmers succeed is by being masters of logistics. What I want are answers to the critical questions about what I’m spending all my money on. That’s where the OADA opportunity comes in. OADA will allow other people to turn data into answers for a farmer."

The OADA project began in March 2014 and Ault hopes open source software will be available by January 2015. OADA has 15 partners including C&H, Climate Corporation, Monsanto, Valley, Valmont, and WinField.

In step with precision agriculture change, seed improvements –- breeding and biotech –- are continuing to break ground with the integration of a new science base. Markers, traits, information technology, and seed chippers allow producers to take advantage of genetic traits and create yields with better positioning and application of inputs.

Technology’s role in breeding innovation is expanding at a stunning pace. Corn, soybeans, cotton, and vegetables have experienced transformational changes in breeding options that weren’t available only five years back. "Seed chippers and markers with the whole genome sequencing capabilities have literally changed plant breeding and given plant breeders powerful insight that speeds up the cycle and makes it more precise," says Robert Fraley, executive vice president and chief technology officer, Monsanto. Fraley believes breeding – in its new, sophisticated molecular form – will continue to be a way of the future. "These advances have probably improved the efficiency of a plant breeder about a thousandfold, reducing the cycle time to produce new seed and it’s on the way to doubling the gain every time we run a breeding cycle."

Two new technologies on the cusp of market introduction will make a huge impact on agriculture, according to Fraley. The first, SmartStax Pro, a new mode of action against corn rootworm, will be available by 2017-2018, and is based on RNAi technology. RNAi can be used on a sequence-specific basis to knock out a gene and create a benefit. It’s a topical, one-time application – not a permanent genetic modification.

In addition to SmartStax Pro, Fraley says Roundup Ready 2 Xtend will carry major benefits for producers. The technology, which may have regulatory approval by the end of 2014, is aimed at broadleaf weeds and Roundup-resistant weeds. "I still have memories of 1996 and driving along the interstate and seeing soybean fields with no weeds. That feeling is going to happen again when we bring Roundup Ready 2 Xtend out," says Fraley. "Having two modes of action and being able to control broadleaf weeds and Roundup-resistant weeds will be incredible."

Advances in information technology, breeding, and biotechnology are on a path toward convergence. Precision agriculture, as Fraley emphasizes, has the ability to integrate science and bring together what’s in the seed, on the seed, and in the field. In addition, the increasing sophistication of sensors to generate data allows a grower to make 40-50 decisions slightly better over the crop course of a growing season and steadily boost yield opportunity.

Eviston believes the changes for agriculture are only just beginning. "It’s going to get easier every single day and year because we’re at the cusp of this innovation and there’s not going to be any slowing down. The things we’re worried about today will be a fleeting memory three years from now."