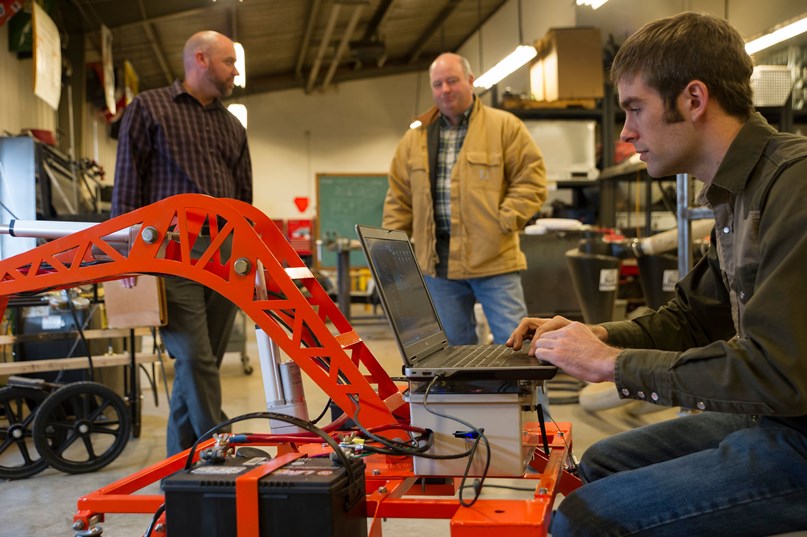 Seek, find and destroy. With the rip of a chainsaw, a robot lumberjack is preparing to clear pastureland.

Artificial intelligence is finding unbounded opportunity in agriculture as drone technology makes automation increasingly enticing for producers. Researchers in Oklahoma are using aerial and ground drones as a wedded pair to attack invasive eastern redcedar trees, a scourge of Great Plains producers. As the technology unfolds, the framework carries a host of possibility for all areas of agriculture.

A 4’-long (42” wide) unmanned ground vehicle (UGV) sits on the shop floor of the Oklahoma State University Department of Biosystems and Agricultural Engineering, waiting patiently for a chance in the field. Reminiscent of a lunar rover, painted cowboy orange and built from 1” square tubing, it is the brainchild of OSU grad student and research engineer Collin Craige, designed and developed by him as a doctoral project. With a mechanical arm able to reach 3’ beyond the frame, the 275 lb. vehicle is a lethal hunter, capable of finding, securing and slicing its prey in half.

Craige’s UGV hunts eastern redcedar, an incessant and costly nuisance species for Great Plains landowners. Initially brought to the Great Plains to create windbreaks and control erosion, redcedar has thrived and taken over ground as a water-sucking beast (potentially a 40-gallon per day draw), reducing forage growth and boosting fire risks. Control costs can be a heavy burden on producers, sometimes nearing $200 per acre.

“Cedar is a big problem for producers and it’s expensive to control and brings no financial return. It would be awesome if we could cut down cedar trees before they become a big problem,” Craige says.

“We brought cedar here and it got out of control, kind of like kudzu in the South,” echoes Mike Buser, OSU ag engineer and overseer of Craige’s project. “Just one cedar 12” in diameter can draw 40 gallons of water per day.”

Craige aims to use an aerial-ground drone combination to cut down saplings (2”-4” diameter): “If this functions properly, we can make a bigger machine to handle larger trees. It’s too expensive to go big from the start.”

Craige has developed mapping software to work with a hectacopter UAV. The UAV will fly over a given pasture or field and transmit imagery and positional information (pitch, roll, elevation and more). The software will identify redcedar and produce a map of GPS coordinates for each tree. The hectacopter has auto-pilot capability and can operate in response to set waypoints.

“After the UAV is finished, we’ll go to processing,” Craige says. “We’ll visually check and make sure everything is correct. Then we take the data and go to the ground robot with something like a flash drive. Plug in and activate. The robot goes on its course using those coordinates as waypoints.”

However, Craige acknowledges the limitations of GPS. “The UAV can only pinpoint GPS coordinates to a certain degree. The ground robot has a camera and LIDAR system so it can travel to the waypoint and look around for cedar. If it sees no cedar, it will send a message and say it can’t find the tree, and then keep going to the next waypoint.”

The UGV is electric, powered by two 12-volt, 120-minute batteries. Potentially, the UGV will recharge in the field through solar panels, or return to a home base station.

DC motors operate a 60-inch grappling arm and clamp for tree felling. A .25 horsepower motor powers a 14” chainsaw. Craige is configuring the control system to control the arm and chainsaw from his laptop. After remote control testing, he’ll implement autopilot for autonomous testing.

The biggest challenge for Craige is keeping the components in unison while trying to maintain budget. A 1-gigahertz, credit card-sized computer (BeagleBone Black) runs the entire shooting match, controlling 10 motors and the actuators on the arm leading to the clamp and saw. “It’s tough to push this little computer. If something malfunctions I’ve got a 275-lb. robot with a running chainsaw,” he says.

Even within a matter of months, technological capability often leaps too fast, forcing Craige to adapt and reconfigure. In April 2017, he purchased an autopilot for the UAV and began work on the UGV. Months later, when he turned his attention back to the UAV, the autopilot was already outdated. Multiple components of Craige’s system are open-sourced: schematics, drawings, code and the BeagleBone Black. “The research arena is moving away from patents and shifting to shareware. We’re developing it and will allow someone else to make it better,” Craige explains.

Craige’s technological advances will have a direct application in Buser’s 2018 research focused on automated contamination retrieval in cotton fields. “We may have a UAV fly over fields to identify contamination and note anything that isn’t cotton,” Buser says. “The UAV will send the location of potential contamination to a mobile app and if the contamination is small, such as plastic shopping bags, then we’ll send out an autonomous vehicle with an arm to suck up the plastic into an onboard storage container. The long-term goal would be a swarm of these bots. The longer-term goal would be expanding bot capabilities to include weed removal.”

“Right now they’re looking at a prototype to control cedar trees with a chainsaw, but we’d like to adapt the tech and remove plastic contamination from cotton fields,” adds Ed Barnes, senior director of agricultural and environmental research at Cotton Incorporated. “If you’re already using the robot, let’s go ahead and use it to get plastic out as well.”

Buser emphasizes cost factors when addressing the nuts-and-bolts potential of unmanned agriculture technology. “Producers should keep an open mind. When you see these technologies, run an economic analysis to figure whether they are justifiable. Cost plays a big part of Collin’s proposal: He’s going to find out if the system is economically feasible.”

“Farmers should keep watching. If a particular technology makes economic sense, then try it. If it doesn’t, hold off because things are changing fast,” Buser says.

Keeping up with the pace of technological change is only one difficulty for agricultural research. Another big issue is the constant pursuit of funding. “The university system is dependent on state and federal help, but that funding continues to decrease,” Buser explains. “How do you keep talent like Collin Craige on staff? It is challenging and creates the need to constantly chase outside funding.”

Craige has earned a razor-sharp reputation. In 2013, he was awarded the American Society of Agricultural and Biological Engineers (ASABE) Preprofessional Engineer of the Year Award, and was named a Cotton Incorporated fellow for 2018. “Collin is an exceptional individual who is an outstanding engineer with a tremendous work ethic. He’s worked with me on a number of projects including product traceability, biomass logistics, and air quality,” Buser says.

After he finishes the unmanned air-ground vehicle project, Craige hopes to work in the corporate agriculture industry, with an eye toward starting a company to make automated skid-steer type equipment adaptable to multiple implements and software. “We now have the technology to fill so many holes in farming,” Craige adds. “There are so many areas of agriculture just waiting for someone to come along and develop what is needed.”