By Minoy Cristobal, Su A Lee, Laia Blavi, and Hans H. Stein at the University of Illinois

Diarrhea is troublesome problem for pigs during the post-weaning period. Traditionally, antibiotic growth promoters have helped control post-weaning diarrhea. But some consumers are increasingly concerned about this practice and are demanding diets from pigs that have not been fed antibiotics.

Feeding low-protein diets may be one way to reduce the incidence of post-weaning diarrhea. However, there is a lack of knowledge about consequences of reducing the protein level in diets fed to weanling pigs.

Low-protein diets fed to pigs results in increased net energy in the diet, reduced water intake by pigs and reduced nitrogen excretion. This means reduced volume of manure and reduced concentrations of ammonium in manure. However, if formulation of low-protein diets results in feeding diets with concentrations of indispensable amino acids (AA) that are below the requirements, deposition of protein in pigs is reduced and deposition of fat is increased.

No one knows if feeding a diet low in protein to weanling pigs also results in changes in carcass characteristics of market pigs. Our team tested the hypothesis that feeding a low-protein diet to pigs during the post-weaning period will result in reduced diarrhea during this period, but no effects on growth performance from wean to finish and no changes in carcass composition of pigs when they reach market weight.

In phase 2, there were also four diets formulated with different AA concentrations but all diets met requirements for indispensable AA. For phases 3, 4, 5 and 6, a common conventional diet was used in each phase and fed to all pigs regardless of treatments in phases 1 and 2. Pigs were fed phase 1 and 2 diets for 14 days and the phase 3 diet was fed for 18 days. Phase 4, 5 and 6 diets were each provided for 35 days. Feed was provided on an ad libitum basis and water was available at all times.

During growing to finishing phases (phases 3 to 6), growth performance was not affected by dietary treatments in phase 1. Thus it appeared that even though pigs fed the 17% CP diet had reduced growth performance in phase 1 compared with pigs fed diets containing sufficient AA, these pigs were able to catch up before market and there were no changes in final BW at market.

Carcass composition of pigs was characterized at the end of the experiment. Hot carcass weight, fat thickness, loin eye area, dressing percentage and lean percentage also did not differ among treatments (Table 2). This observation confirms that undersupplying AA during the early post-weaning period will not result in long-term negative effects for protein synthesis and muscle protein deposition.

In conclusion, an increase in diarrhea score is usually observed if the antibiotic growth promoter is removed from the diet, but this effect may be prevented by reducing protein in diets for weanling pigs during the initial two weeks post-weaning. Even if this means that pigs need to be undersupplied with AA during the initial two weeks post weaning, that will not affect overall growth performance from wean to finish and carcass characteristics when pigs are marketed will also not be affected. 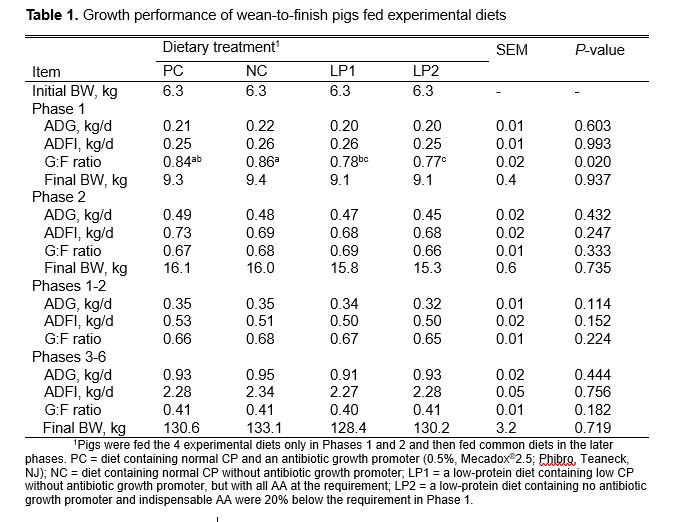 Top 5 Things to Do When You See Pigs with Diarrhea