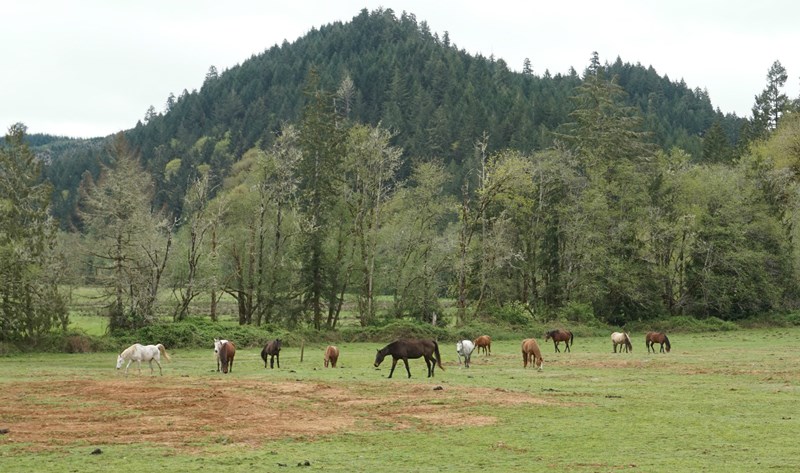 Beyond rendering plants, expensive crematoria and landfills, the options for respectfully burying a 1,000 lb. animal are extremely limited in many areas of the United States.
( Farm Journal )

Swollen populations of federally-protected wild horses roaming 10 Western states are starved and damaging rangelands, Utah and U.S. government officials said at conference Wednesday, an invitation-only meeting that mustang-protection advocates say is promoting the slaughter of an icon of the American West.

Members of Utah's congressional delegation and a U.S. Interior Department official speaking at the National Horse and Burro Summit in Salt Lake City all described an unsustainable population of wild horses that's nearly three times the size that federal officials think the rangeland can support.

Horse-protection groups who weren't allowed into the Utah State University-hosted event protested outside the downtown hotel where it was held, calling at "slaughter summit" that's kowtowing to livestock interests to promote increased roundups and slaughter of wild horse from California to Colorado without public input.

"It's a collection of politicians and lobbyists for the agriculture industry and the sole purpose is to advance their agenda of slaughtering America's wild horses," said Suzanne Roy with the American Wild Horse Campaign.

Terry Messmer, a wildland resources professor at Utah State, defended the conference lineup he said was organized by "a broad coalition of horse advocates - not activist groups, but people who are concerned about the welfare of horses and western rangeland management."

The meeting comes a week after congressional auditors identified countless hurdles but no solutions to populations of wild horses and burros, including an ever-increasing backlog of captured mustangs already in government corrals costing taxpayers $50 million annually.

A report by Congress' General Accounting Office made public last week noted that the U.S. Bureau of Land Management removed nearly 135,000 horses from the range between 2000 and 2016 but the population on the range doubled and the number of horses in holding facilities increased seven-fold.

The BLM asserts that U.S. rangeland can sustain fewer than 27,000 horses and burros, but there are more than 72,000 wild horses on the rangeland and about 46,000 in holding facilities.

Many horse protection advocates say contraception is the only realistic and humane solution to limit horse populations they feel have more right to roam the range than federally subsidized livestock.

Inside the summit, speakers on Wednesday said it's cruel to allow unchecked populations of wild horses and burros to starve and compete with other animals for scarce resources.

"There is nothing humane or majestic to see a wild horse starving to death or a wild burro dying of thirst," said Aurelia Skipwith, deputy assistant U.S. Interior Secretary for fish and wildlife and national parks.

Skipwith said the first major solution is for Congress to pass President Donald Trump's budget request that includes language allowing wild horses to be sold without the requirement that buyers guarantee the animals won't be resold for slaughter.

Skipwith said the ability to sell horses "without limitation," along with euthanizing horses and burros, is the "most humane way to address the issue."

Horse slaughterhouses are prohibited in the U.S. but legal in many other countries, including Canada, Mexico and parts of Europe where horse meat is considered a delicacy.

U.S. Rep. Chris Stewart, R-Utah, spoke of his efforts in Congress to try to allow states to manage the animals and his amendment to a budget bill that allows horses to be euthanized.

Stewart said he sees horses as companions, like dogs, and would never eat a horse or propose they be slaughtered for food.

"That's not what we're trying to do here," Stewart said. "That's not the solution, but it may include something similar to that."

A message asking his office to clarify his comments was not returned.

U.S. Rep. Rob Bishop of Utah took the stage holding a children's toy horse stick and cracked a joke about riding a horse to work as Interior Secretary Ryan Zinke has done in the streets of Washington.

Bishop, who chairs the U.S. House Natural Resources Committee, said that despite his holding a toy, the summit was addressing a serious issue that many across the country and in Congress don't understand the issue because they've been swayed by activists "who care more about fundraising opportunities than the animals. "

"There are members of Congress who truly believe that every horse is Seabiscuit. Of course, the French think every horse should be Sea-Brisket," he joked.

Utah is spending up to $50,000 from money set aside for horse and burro programs to co-sponsor the summit. Utah Department of Natural Resources Director Mike Styler said Wednesday that the state is paying to record the summit and the recordings will be posted online in a few days.