Argentine farmer fights for no till agriculture, wins Kleckner Award 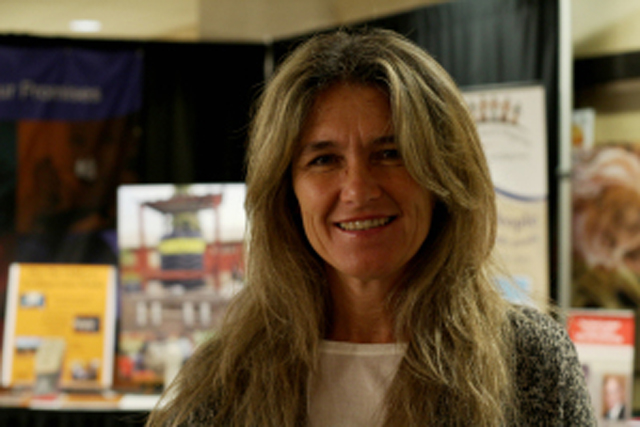 Maria Giraudo is the 10th winner of the Annual Kleckner Award.
( Maria Kalaitzandonakes/University of Missouri )

DES MOINES, Iowa — About 40 years ago Maria “Pilu” Giraudo’s father bagan to notice his soil eroding. He and neighboring farmers tried tirelessly to reverse the damage. After some years and many, many trials and advice he reduced and then stopped tilling, rejuvenating the tired soil. Yesterday, Giraudo received the Kleckner Award, an annual recognition given by  Global Farmer Network to a farmer who shows leadership and vision, for her work in promotion of no-till agriculture in Argentina.

Tilling, digging rows into the soil by hand or with machinery, is an age-old method used by most of the world’s farmers, but agricultural advocates like Giraudo are attempting to change this practice and trade it in for something more sustainable. No-till farming may be that mtehod. Farmers can grow crops without disturbing fields and incorporate the leftovers from the last harvested crops.

Giraudo is a fifth generation farmer from central Argentina. She and her family produce soybeans, wheat, barley, sorghum and livestock on 9,800 acres. As an agronomist, she consults with farmers who collectively own about 50,000 acres in Argentina. In June, she took her fight from the farms to the government when she accepted a new role coordinating policies for sustainable development in the Ministry of Agroindustry for Argentina. 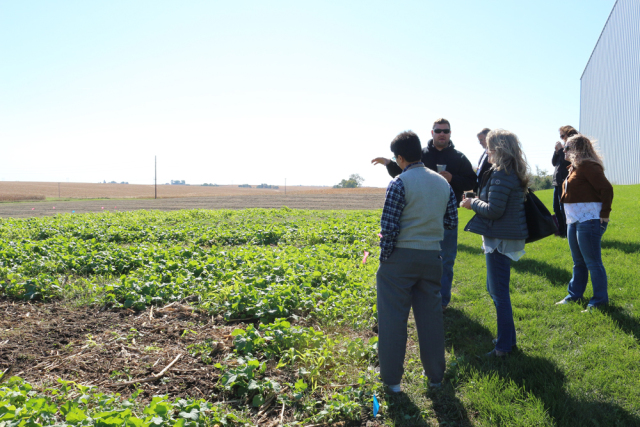 Maria “Pilu” Giraudo, third from left, and 13 other farmers from around the world visited an Iowa corn and soybean farm on Tuesday morning and learned about the farm’s cover cropping and soil management practices. © Maria Kalaitzandonakes/University of Missouri

“When you become a farmer you realize that you have a responsibility and a commitment not just to produce food, but also to take care of the environment and human health,” Giraudo said. “We need to use all the tools to help us meet this commitment. No-till is crucial not only for this generation, but for the next generation; It interrupts the cycle of soil deterioration.”

Farmer and Missouri Department of Agriculture Director, Richard Fordyce, said using no-till practices is often a financial decision, as are most choices on the farm. No-till means less gas used going over the fields, less time tilling and less expensive inputs to replace nutrients in the soil. The Conservation Technology Information Center, an organization that works with more than 100 universities, reported that no-till or minimal tillage saves farmers an average 3.5 gallons of fuel per acre.

Fordyce converted his soybean and corn farm in Bethany, Missouri to no-till about 15 years ago.

“The proof is in the pudding — or in the fields I guess,” Fordyce said. “There soil is healthier and there is less nutrient-rich soil particles being washed away and causing problems.”

No-till is just one of the sustainable practices that Giraudo encourages farmers to use: cover cropping, crop rotation and integrated pest and weed management plans are important and cost effective ways to maintain fertile soils and protect the surrounding environment, she said.

“We want everyone to join us in the commitment to this mission,” Giraudo said.

When her father changed his fields over to no-till, “many thought he was mad,” Giraudo laughed, remembering. But now, many farmers are beginning to see no-till as a route for soil recovery in physical, biological and chemical ways.  According to a study published in International Soil and Water Conservation Research in 2014,  which looked at the changes in Argentine soil practice,  no-till farming went from from just a few hundred thousand hectares in 1990 to more than 23 million hectares, or around 79 percent of the grain cropped area in 2010. Much of this change is attributed to the Argentina No Till Farmers Association, an organization that Giraudo was president of until April and has over 3,000 members.

Receiving the Kleckner Award and learning from the Borlaug Dialogues and the Global Farmer Roundtable has fortified Giraudo’s belief in her mission.“This award makes me stronger, gives me a lot of energy and I have one more thing I can show to convince people from every part of the world to work together and change things,” Giraudo said.

This story is published in collaboration with the University of Missouri. Read more about their reporting project at the World Food Prize here.