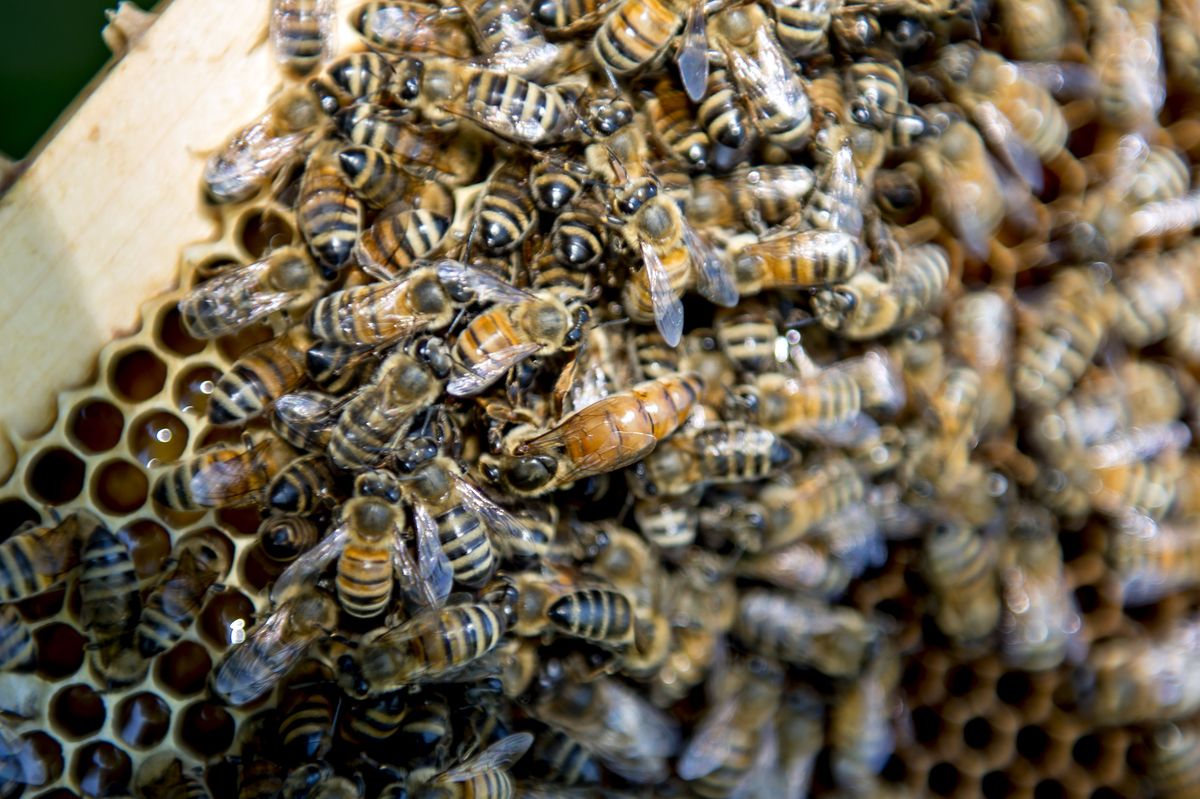 Richard Coy warned a visitor to step back as he lifted the lid of a honeybee hive. But with the temperature just above freezing and a brisk wind blowing, the bees clung to the relative warmth of the hive.

Scattered throughout the surrounding quarry were about 1,000 other hives, all of them deemed too weak to make the annual trip to California to pollinate the almond crop.

For Coy — co-owner with his parents and brother David of Coy's Honey Farm — this is the slow time of the year when he has the fewest bees and the fewest viable hives.

Winter is always hard on bees, but Coy told Arkansas Democrat-Gazette that the die-off has gotten progressively worse over the past two decades.

"We've lost 50 percent of our hives the last three years," he said.

Rapid declines in the nation's honeybee population have drawn increasing attention since "colony collapse disorder" was first identified in about 2006, said Jon Zawislak, a honeybee specialist with the University of Arkansas System's Agriculture Division.

The issue is important because honeybees are crucial to the food supply: About one-third of the human diet comes from insect-pollinated plants, and the honeybee is responsible for 80 percent of that pollination.

Environmental groups say pesticides are a key reason for increased bee deaths. In particular, they have argued that the class of pesticides called neonicotinoids — the chemicals work on insects' central nervous systems and are sometimes called "neonics" — should be banned to protect bees.

In a preliminary risk assessment issued in January, the Environmental Protection Agency said a popular neonic "shows a threat" to honeybees when its residue in cotton and citrus pollen and nectar is above 25 parts per billion. The agency said it found that "citrus and cotton may have residues of the pesticide in pollen and nectar above the threshold." It said other crops such as corn and leafy vegetables either don't produce nectar or have residues below the threshold.

The EPA stressed in a statement issued after the assessment was made public that it hadn't yet reached a final conclusion and encouraged critics to submit counter-arguments during a public comment period.

One critic is Gus Lorenz, distinguished professor and associate head of entomology at UA.

Lorenz said he and his fellow UA researchers planted cotton seeds treated with the pesticide and then pulled samples at various stages of plant growth. Tests showed "fairly high levels" of the pesticide when the plants first emerged, he said. By the time the plants bloomed, and became attractive to bees, the pesticide was below the lethal level in pollen and undetectable in nectar, he said.

The outcome of the debate is crucial to Arkansas cotton growers, Lorenz said, because the neonicotinoid pesticide imidacloprid, most commonly sold by Bayer under the brand name Gaucho, is the only effective seed treatment against a devastating cotton pest. That pest, the thrip, can sharply reduce cotton yields and wipe out entire fields in extreme cases, Lorenz said.

The EPA review is just one component of a federal initiative to promote honeybee health. In May, a White House task force said the government should step up efforts to increase habitats for bees, butterflies and other species while researching rapid population declines. Additional restrictions on pesticides might be needed, the task force said.

In December, the U.S. Department of Agriculture announced it would survey beekeepers and farmers across the nation to assess the number and health of honeybee colonies, honey production and stocks and the cost to farmers of pollination services.

The survey results will be used to develop base-line data and metrics for winter, summer and total colony loss, the USDA said. One goal of the effort is to reduce honeybee colony loss during winter to no more than 15 percent within 10 years, the agency said.

Coy and Zawislak agree there's no single cause of the increased bee deaths. Along with pesticide exposure, they say, parasites, disease, poor nutrition and lack of genetic diversity also are factors.

The chief parasite appears to be the varroa mite, which Zawislak said spread quickly across the country and became resistant to the anti-mite chemicals that beekeepers use. The mites feed on bee larvae, Zawislak said, and the bees that emerge from metamorphosis are significantly weakened as a result. The mites also spread viruses among bees, he said.

"When the mite hit," Coy said, "there were some beekeepers that didn't realize what was happening until after it had wiped out most of their hives, and then the feral hives were wiped out."

Breeding programs sprang up in response, Coy said, but they have had mixed results, sometimes eliminating beneficial traits while enhancing others.

Coy's Honey Farms, which had 12,000 productive hives at the height of the season in May, uses Russian honeybees because they are more resistant to the varroa mites. The Russian bees remove mites during grooming, Coy said, giving them a better chance to thrive than other species.

The company makes money in three ways: through commercial pollination, honey production and sales of queens and other bees, Coy said.

In late January and early February, Coy sends about 3,000 hives to California to help pollinate the almond crop, a transaction arranged by a broker. This year, he will be paid $155 per hive, up from $145 last year because of the bee shortage, he said, and commercial pollination will account for about 25 percent of the company's revenue.

After the almond trees finish flowering in mid-March, the broker gathers Coy's bees and ships them home. About 2,500 of those hives are sent to Coy's operation in Gulfport, Miss., where they can begin making honey earlier than in Arkansas. In May, when plants in the Delta are flowering, he puts hives on row crop farms along a 25-county strip from Kennett, Mo., to just south of Marianna.

Row crops are wind-pollinated, but bees can enhance their productivity, Coy said. Soybean yields can increase 5 percent to 10 percent when bees are present, he said.

The honey season in Gulfport ends about July 1, so Coy moves his remaining hives away from the coast (and the threat of hurricanes) to Clarksdale, Miss., or to Arkansas. Clarksdale is a particularly fertile area and bees there can produce two full honey crops by the fall, he said.

The harvest begins in late August and runs through November, Coy said. He processes all of his own honey, as well as some for other beekeepers, at his plant in Jonesboro, and ships the finished product -- about 1.2 million pounds -- to the Sioux Honey Association, an Iowa co-op. Honey production accounts for about 75 percent of the company's revenue, he said.

In November, after hurricane season, Coy sends about 3,000 hives back to Gulfport for safekeeping. Those hives are later split, creating about 8,000 hives. The brood stock of about 3,000 hives stays in Gulfport until it's time to head north in July, he said.

Although his company is successful today, Coy worries that the declining bee population threatens its future. To diversify, Coy's Honey Farm recently bought Crooked Creek Apiaries, a move that Coy says enables the company to sell directly to 30 retail outlets in Arkansas and Tennessee.

Asked how the decline in the bee population might be reversed, Coy was not optimistic.

A national campaign to plant wildflowers would help provide more diverse sources of pollen, but Coy said it wouldn't solve the problem by itself.

Homeowners kill the weeds in their yards, row crops provide the only pollen in heavily cultivated areas, and cities continue to destroy habitat as they expand, he said. And, he said, pesticides contribute to the problem.

"I do have concerns about whether we will be able to stay in business in the future," Coy said. "All it takes is one year of losing 70 (percent to) 80 percent of your hives. You can't recover from that."