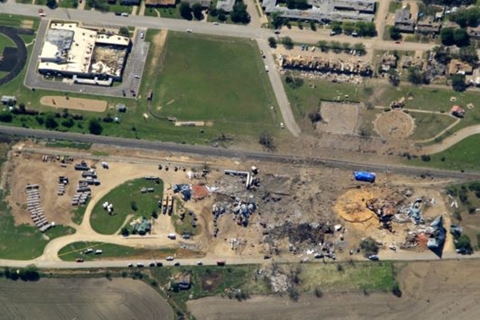 A fire at the West Fertilizer Co. plant in West, Texas, in April 2013 was intentionally set, the U.S. Bureau of Alcohol, Tobacco, Firearms & Explosives said on Wednesday.

A $50,000 reward was offered for information leading to the arrest of persons responsible for the explosion that killed 15 people, destroyed 500 homes and left a crater 93 feet wide (28 meters) and 12 feet across, the Houston field division of the bureau said Wednesday in a statement on its website.

The agency announced its findings following more than 400 interviews, a fire-scene examination and a review of witness photos and videos. “All viable accidental and natural fire scenarios were hypothesized, tested and eliminated,” according to the statement.

The explosion damaged buildings over a 37-block area and left the high school and the intermediate school ablaze. The U.S. Geological Survey recorded an earthquake measuring 2.1 on the Richter scale.

National regulations on the handling and storage of ammonium nitrate fertilizer are needed to avoid this type of massive explosion from occurring, the U.S. Chemical Safety Board said in April 2014. The explosion was “preventable,” and the 40 tons to 60 tons of ammonium nitrate that ignited were stored in wooden buildings and bins, rather than concrete, with no modern fire-suppression equipment, according to the board’s chairman.

CF Industries Holdings Inc., the largest U.S. producer of nitrogen fertilizer, was sued by the city of West for the deadly explosion in a plant that the company supplied with ammonium nitrate. The company is not commenting on the U.S. bureau’s findings, spokesman Chris Close said in a telephone interview.