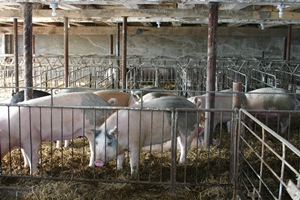 With images of pigs and barbecued meats tattooed on his left calf, Brian Polak is doing what he can to cope with the highest price of bacon in three decades. The 41-year-old self-proclaimed "baconholic" now often cures his own at home to help reduce costs.

"A day doesn’t go by where I don’t have at least a strip," Polak, a senior-program manager for AT&T Inc. who lives in Carol Stream, Illinois, said in a telephone interview. "I don’t think I could ever cut it completely out."

Declining supplies of pigs that resulted from a deadly virus that spread across 30 states since the outbreak began last year have pushed up retail-bacon prices 10 percent in 2014 to $6.106 a pound in June, the highest since at least 1980, government data show. Wholesale pork-belly costs doubled, reaching a record $2.0353 a pound in April, according to the U.S. Department of Agriculture.

"I don’t think we’re going to see real damage to bacon demand at all," said Meyer, who expects hog slaughter to drop by about 10.5 percent this month as the most significant losses from the virus are realized.

Hog slaughter through Aug. 2 fell 4.8 percent from a year earlier after pig losses from the deadly porcine epidemic diarrhea virus. Hog and pork prices will continue to break records through the rest of the year in countries that have seen outbreaks of the virus, including the U.S. and Mexico, Rabobank International said in a report e-mailed July 25.

Lean-hog futures gained as much as 56 percent this year to a record $1.33425 a pound in March on the Chicago Mercantile Exchange. Today, the most-active contract dropped 1.9 percent to $1.01675 a pound at 11:41 a.m. local time. That’s a 19 percent increase for the year, the third-largest advance in the 22- member Bloomberg Commodity Index.

Higher prices are having a bigger effect on profit margins for restaurants including St. Louis, Missouri-based Panera Bread Co. than on consumer demand. Bacon prices rose as much as 23 percent in the second quarter at Panera Bread amid the supply shortage, adding to "unexpected food cost inflation," Chief Financial Officer Roger C. Matthews Jr. said on a July 30 earnings call.

Paddy Long’s, a bacon and beer bar in Chicago, uses about 700 pounds of the meat each week in items including "The Bomb," a $12.95 sandwich filled with spicy sausage, pork and beef wrapped in brown-sugar bacon and slow cooked on a pig roaster. Menu prices haven’t gone up yet, although co-owner Pat Berger said he is considering it.

"We would never mess with the formula that’s working at Paddy Long’s," Berger said by phone on July 17. "Bacon is what brings everybody in the door."

That’s because bacon has the ideal combination of salt and fat, said Jennifer McLagan, the Toronto-based author of "Fat: An Appreciation of a Misunderstood Ingredient, with Recipes." This year, 68.1 percent of all restaurants list bacon in at least one menu item, up from 62.4 percent in 2005, according to Datassential, a Chicago-based company that tracks U.S. trends.

Output is likely to rebound as lower feed costs give producers an incentive to expand herds, Michael Swanson, senior agricultural economist at Wells Fargo & Co. in Minneapolis, said by phone July 22. Producers have raised hogs to heavier weights, helping to offset lower slaughter rates. Futures dropped 22 percent in July, and spot pork-belly prices are down 34 percent from their April high.

Warehouses have stockpiled bacon, with frozen inventories in June reaching 84 million pounds, almost double the amount from a year earlier, USDA data show. The amount in freezers is still close to the 88 million pounds held in February, which was the largest amount since 2008.

Wholesale-pork prices swelled 52 percent this year, reaching a record $1.3756 a pound in mid-July. The cost probably hasn’t peaked yet, as supply shortages remain and exports have held strong to other countries affected by the virus, including Mexico, Will Sawyer, vice president of U.S. animal protein research at Rabobank in Atlanta, said in a July 22 interview. Through May, U.S. pork shipments were 9 percent ahead of the previous year, according to the U.S. Meat Export Federation.

That won’t stop Brent Taylor, a salesman at Four Seasons Heating & Air Conditioning in Chicago who eats at least three strips of bacon every morning. While the 39-year-old noticed an increase in costs on his grocery bill, he doesn’t plan to sacrifice his breakfast ritual.

"It adds great flavor and makes everything taste better," Taylor, of Minooka, Illinois, 60 miles southwest of Chicago, said by phone July 22. "I’ll cut something else out to make up for the costs if I need to."