Bad Weather for Durum Wheat Will Push Up Pasta Prices 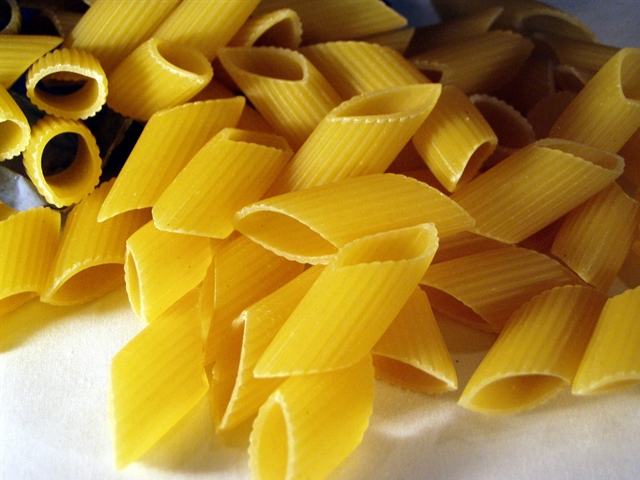 Too wet in spring. Too dry in summer. The weather was never just right southeast of Calgary for Kevin Auch’s 600 acres of durum wheat used to make pasta. Then, at harvest time, a snowstorm left crops flat and frozen.

“We won’t get top prices,” Auch said in a telephone interview on Oct. 15. He said the grain quality on his farm has deteriorated to the lowest in more than 20 years.

Global output of durum wheat will fall to a 13-year low as the harvest in Canada, the world’s top producer, shrinks 27 percent, the nation’s agriculture agency said Oct. 17. That’s a problem for pasta lovers. The smaller harvest of the high-protein grain, which makes up the bulk of pasta ingredient expenses, is triggering cost increases that threaten to add to the near-record prices U.S. consumers are already paying.

“Durum has very high gluten content, which is the glue that holds pasta together and gives you a nice firm al dente bite,” Patrick Regan, chairman of the National Pasta Association, said in a telephone interview on Oct 14. “At this point, it’s really the only option.”

At elevators near Alberta, durum prices doubled to C$8 ($7.13) a bushel from a year earlier, according to the Western Canadian Wheat Growers. Through Oct. 20, U.S. prices jumped 71 percent in 2014 to a three-year high, a daily index published by the Minneapolis Grain Exchange showed.

The shortage of durum, which has the hardest texture of all classes of wheat, contrasts with gains in other grain supplies. Global production of all wheat grades will climb 0.8 percent to a record 721.1 million metric tons, U.S. Department of Agriculture data showed on Oct. 10. On the Chicago Board of Trade, benchmark futures, which reflect prices on soft red winter wheat used in cookies and cakes, have dropped 13 percent this year to $5.2675 a bushel.

In addition to the weak Canadian harvest, durum output is slumping in Europe and the U.S. The European Union crop will fall 10 percent to 7.4 million tons, according to agriculture trade group Coceral, while the USDA said that domestic production will drop 1.5 percent to 1.55 million tons.

Canada, though, is the big problem.

Little has gone right in 2014 after a record harvest of 6.5 million tons last season. First, wet weather delayed seeding across parts of the prairies and then some farmers reported fields “being subject to damaging weather events, such as hail and snow,” the government said on Oct. 3. Two weeks later, the agriculture agency cut its forecast for the 12 months ending in July to 4.76 million tons.

“Everywhere got hit,” Stephen Vandervalk, a vice president at Alberta’s Western Canadian Wheat Growers, said in a telephone interview on Oct. 15 from the province’s Fort Macleod. “They are struggling to find quality durum. If you’ve got a good crop, it’s a jackpot.”

Over the border, grain elevators in North Dakota have been posting bids as high as $14 a bushel for milling-quality durum, said Jim Peterson, a marketing director for the North Dakota Wheat Commission in Mandan. That’s almost double the average price of $7.62 paid to U.S. farmers in September, preliminary USDA data show. Peterson said that most of the North Dakota crop is lower-quality durum that will be sold for less.

Auch, the farmer near Calgary, said his durum this year is No. 4, the second-lowest grade for the grain. Russell Doe, a farmer in Reeder, North Dakota, doesn’t like how his wheat looks either after heavy rains hit. The grain on his 3,000-acre (1,214 hectares) farm has taken on a “pale, bleached” hue that’s lighter than the golden color that pasta makers like, he explained. Doe called it the worst-looking crop he’s had since he began planting durum three decades ago.

“There’s no doubt that the average overall quality of this year’s crop is a little bit lower,” said Mark Vermylen, a vice president at A. Zerega’s Sons Inc. in Fair Lawn, New Jersey, which produces about 250 million pounds (113.4 million kilograms) of pasta annually. Prices for durum and the semolina flour the wheat is milled into “are dramatically higher,” about doubling from a year earlier, he said.

Shipping delays added to the run-up in costs, Vermylen said. “There always seems to be someone desperate for durum wheat because their train didn’t arrive,” he said.

Spaghetti and macaroni prices paid by U.S. consumers have climbed 6.9 percent this year, reaching a record $1.375 a pound in August, government data show.

Most of Canada’s limited supply of quality durum is being shipped to the U.S. as flour millers pay a premium of as much as $13 a bushel, Jerry Klassen, a manager of Canadian operations and trading at Gap SA Grains & Produits in Winnipeg, said in a telephone interview. Canadian grain companies are bidding at least C$4 less because customers in Europe and North Africa won’t pay more, he said.

Prices will probably remain high until early 2015 when durum is harvested in Europe and Africa, he said.

“The crop is such poor quality out there, companies are having a difficult time,” Klassen said. “You just have no high-quality durum available.”