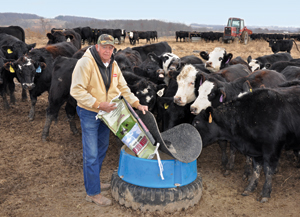 We all know that life is a balancing act. It’s also the key to planning your cowherd nutrition program. Good nutrition that is supplemented with a balanced mineral mix is vitally important for optimum reproduction and lactation in your cowherd. Good forages and feeds, balanced with the right mineral mix, offer the best growth for calves and young cattle, while improving overall herd health and immunity.

“Our cowherds today, with larger cows and better genetics, produce more pounds of beef per acre than in our grandfather’s era, and we have to feed them to match their needs,” Perry says. He adds that good-quality forages and feedstuffs supply a large portion of required minerals, and a balanced mineral supplement can inexpensively provide the rest.

For adequate cowherd nutrition, many variables must be considered, Perry says. “Producers should know the quality and amounts of forages and feeds fed, how much their cows require and actually eat, and if cows are stressed by weather or disease.”

Feeding a balanced mineral mix can help alleviate problems such as cows with inadequate levels of magnesium suffering from grass tetany while grazing lush spring or small grain pastures.

“Low magnesium levels are known to decrease reproduction and milk production in brood cows, which may be a much bigger economic loss to the herd than grass tetany,” Perry says.

True believer. Henry Langstraat knows the value of a complete and balanced mineral program. He and his wife, Cynthia, and their son, Jason, own a 500-head cowherd near Otley, Iowa. They manage their cows with an optimum nutrition program that includes a balanced mineral supplement.

“We use minerals religiously. We have free-choice minerals available at all times for all our cows, heifers, feeder calves, and bulls,” Langstraat says.

Years ago, he did not use minerals, thinking that it was an unnecessary cost. But he soon changed his mind after a spate of open cows forced him to reconsider the importance of minerals.

The Langstraats tend their cows on more than 1,500 acres in two counties. They consider themselves graziers and utilize a forage-based program for their black, ¾-Angus and ¼-Simmental crossbred cows. Their cattle are rotated through a paddock system of high-quality pastures. If winter snows don’t cover the grass, cattle are overwintered on stockpiled forages and some hay in late winter, supplemented only with a balanced mineral mix.

“Our mineral program varies with the seasons. From mid-May to mid-September, we feed mineral spiked with vitamins A, D and E. It has helped improve our conception rate percentage, which runs in the high 90s. The vitamin A in the mineral mix also helps with pinkeye during summer,”
Langstraat says.

The Langstraats emphasize good growth and condition for their commercial cowherd, not only to maintain higher conception rates, but also for a developing heifer market. Each year, they sell about 200 bred second-calf heifers. They have developed their unique heifer program for several reasons.

“We have a uniform calf crop to keep or sell, and other cattle producers really like our well-developed heifers that are proven and can calve on their own. Our goal is a 1,250-lb., moderate-sized cow,” Langstraat says.

Depending on the amount of coproducts in a cattle ration—generally recommended at no more than 0.5% of the animal’s body weight—a less expensive balanced mineral mix with a lower phosphorus level can be fed due to the phosphorus in the coproducts.

The palatability of minerals can affect the amount of mineral consumed by cattle, which should be about 3 oz. to 4 oz. of mineral per bred cow per day.

“If consumption is 1 oz. per day or less, you may need a more palatable feed ingredient to make cows eat the mineral,” Spears says. Feeds such as dried distillers’ grains and molasses will help cows eat minerals, especially unpalatable elements such as magnesium oxide, which is needed to avoid grass tetany.

Spears has also studied the effects of applying hog manure and poultry litter to grass pastures where cattle graze. Both waste products have high amounts of phosphorus, and copper can also be present in toxic amounts.

“The phosphorus and copper will be used by the grass, so unless cattle eat the manure before it washes into the soil, they shouldn’t have any problems,” Spears says.

One area of concern could be pastures that have had excessive amounts of hog manure applied.
“High levels of nitrogen and potassium in grasses can tie up magnesium and increase the risk for grass tetany on late-winter and early-spring pastures,” Spears warns.

Midwinter nutrition. The mineral program is often forgotten while bred cows are out on cornstalks in the fall and winter months, says Stephanie Hansen, an assistant professor of beef feedlot nutrition at Iowa State University.

“Cows are in mid- to late gestation and the fetus needs magnesium, calcium and phosphorus for structural development. Heifers and young cows require a good, balanced mineral mix for optimal fetal growth and development,” Hansen says.

She says feeding coproducts such as corn gluten syrup or dried distillers’ grains with high sulfur content can have a negative impact on cow nutrition.

“Coproducts high in sulfur like dried distillers’ grains can also create a selenium deficiency in addition to tying up magnesium,” Hansen says.

One of the challenges in mineral supplementation is to have it consistently available to cattle. Have a balanced mineral mix in the feed or as a free-choice mineral. Mixing mineral in the feed helps all animals receive the benefits, including timid heifers and cows that may miss out at the mineral feeder.

Another factor in mineral intake by the cowherd is the mineral source. Zinc sulfate, for example, is more bioavailable than other sources of zinc, as is copper sulfate, which is more absorbable than copper oxide.

“A general rule is that sulfates are the most available mineral source, with carbonates and oxides being less available, although it varies,” Hansen adds.

All three nutritionists—Perry, Spears and Hansen—recommend that producers work with a cattle nutrition consultant and take hay and feed samples. This will help to determine the amount of nutrients that are available in the forages and feedstuffs that are being fed to the cowherd.

“Minerals are essential to animal growth, reproduction and health. Mineral supplementation is the insurance policy that every producer needs,” Spears says. BT

Minerals are needed for cattle health, productivity and reproduction. They are necessary for bone and tooth growth, electrolytes in body fluids, metabolizing nutrients, nerve conduction, immune response and reproduction.

The specific amount of minerals that cattle require is influenced by age, rate of growth, stage of pregnancy and level of lactation. Mineral requirements also vary for different body functions.

The major factor influencing mineral intake by cattle is the mineral content of forages. Forages are often deficient in important trace minerals, or they may contain trace minerals such as iron or molybdenum at sufficient levels to interfere with copper absorption.