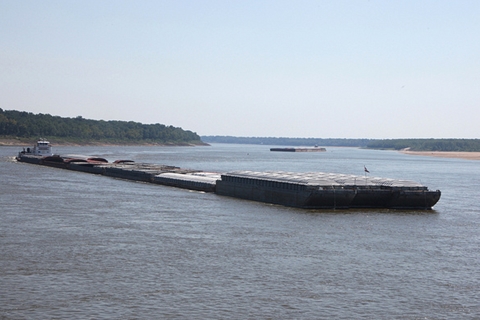 As U.S. farmers begin the biggest corn and soybean harvests ever, the bins at Elburn Cooperative Co. in Illinois remain almost empty. It simply costs too much to send Midwest crops by barge to New Orleans export terminals.

Shipping fees along the Mississippi River, the world’s busiest inland waterway, have more than doubled to a record in the past year as an avalanche of new crops compete with oil, coal and chemicals for limited space, government data show. The cost surge is more than normal for harvest season and may strand more grain during the busiest time of year for handlers in the U.S., the biggest global exporter.

“Our storage facilities are as empty as they have ever been coming into the harvest season,” said Phil Farrell, the grain division manager at Elburn, which tripled its holding capacity over the past eight years to 21 million bushels as domestic output surged. “The high barge costs mean more corn will be put on the ground or into storage.”

An emerging logjam of crops is compounding the financial pinch for some Midwest farmers who already are getting the lowest prices since at least 2010, as buyers demand bigger discounts to cover higher shipping costs. U.S. export-sales of corn for delivery by Aug. 31 are down 4.2 percent from a year earlier and commitments by importers are growing at the slowest pace since 2009, U.S. Department of Agriculture data show.

The cost of sending grain almost 1,000 miles by barge from Morris, Illinois, to the Gulf of Mexico via the Illinois and Mississippi rivers almost doubled from a year earlier to a record $55.91 for 2,000 pounds on Oct. 1, U.S. Department of Agriculture data show.

“Barge operators have indicated there have been limited freight buyers at current spot rates,” especially in the main growing area of the upper Midwest, including Illinois, Iowa and Minnesota, where harvests are just starting, the USDA said Oct. 2. Most of the activity is in the lower Mississippi River, where crop collection is more advanced and barge fees are lower.

The USDA probably will increase its 2014 production forecasts in a report today. Corn output will reach 14.54 billion bushels, 4.4 percent more than last year and the most ever, leaving inventories before the 2015 harvest 74 percent larger than a year earlier, a Bloomberg survey of analysts showed. Soybean output will jump 19 percent to 3.99 billion bushels, leaving inventories next year at 488 million, the most in eight years, the survey showed.

Corn futures are down 19 percent this year to $3.4175 a bushel at 6:33 a.m. on the Chicago Board of Trade, after touching a five-year low of $3.1825 on Oct. 1. Soybeans plunged 28 percent to $9.3325 a bushel, reaching a four-year low of $9.04 on Oct. 1. Slumping crop prices helped send the Bloomberg Commodity Index of 22 raw materials down 6.1 percent this year. The MSCI All-Country World Index of equities slid 1.2 percent, while the Bloomberg Treasury Bond Index rose 4.8 percent.

The Elburn Co-op, based in Elburn, Illinois, paid 58 cents a bushel less than Chicago futures for spot delivery of corn on Oct. 8, compared with a 23 cents a year earlier. The average cash price for corn was $3.0257, down 25 percent this year, while soybeans slid 32 percent to $8.7516, Minneapolis Grain Exchange data show.

Goldman Sachs Group Inc. cut its three-month and six-month outlooks for corn and soybeans on Sept. 30, predicting prices will stay “below marginal production costs” in the face of constrained demand growth.

The barge premiums may not last, and shipments may increase as the harvest progresses.

As of Oct. 7, the cost to ship a ton of grain from Minneapolis to the Gulf fell to $49.02 from $54.66 a week earlier, USDA data show. While that’s a third higher than the four-week average of the past three years, river shipments in the week ending Oct. 4 totaled 510,000 tons, up from 276,000 in the same period a year earlier, the USDA said yesterday.

The harvests are usually complete by the end of November. As of Oct. 3, 17 percent of the corn crop was collected and 20 percent for soybeans, USDA data show.

“Barge rates could collapse as the harvest progresses if farmers find a way to hold off selling,” said Glenn Hollander, a partner at broker Hollander & Feuerhaken in Chicago. “At some point, the laws of supply and demand will take over, and people will find alternative modes to move grain.”

At Elburn Co-op, as much as half the annual corn-barge traffic usually occurs in the fourth quarter, Farrell said. While the company has sent very little down the Illinois River since March, it is moving grain via truck or railroad, mostly to buyers in the Midwest rather than export terminals, he said.

Rates have remained high because crops are competing for space on the river with raw materials shipped along Mississippi waterways, and alternatives aren’t always accessible.

A surge in domestic oil production has led to a jump in energy shipments on rail networks at the expense of grain, Roger Krueger, the executive vice president for the South Dakota Wheat Growers Association, the state’s biggest locally owned cooperative. The Association of American Railroads says crude moved by rail almost doubled last year. The bottlenecks may persist because the Energy Department is predicting the most oil output in 45 years in 2015.

Railroad congestion has compounded delays for U.S. grain handlers for the past year, Arthur Neal, a deputy administrator for transportation and marketing at the USDA, told a Senate committee at a hearing on Sept. 10. Since October 2013, the USDA has reported delays, missed shipments, backlogs and higher costs for railroad services, Neal testified.

In land-locked South Dakota, bids of $4,500 per rail car by users are well below the offers from rail car owners of $6,000, compared with a $3,500 bid and $5,000 offer in 2013, according to Krueger at the Aberdeen, South Dakota-based co-op. Cars normally cost about $700 each, so the increase this year has added $1.50 a bushel to ship corn and soybeans from South Dakota to export terminals on the West Coast.

Expenses are going up because of slow train speeds rather than a shortage of rail cars, Krueger said. Train speed averaged 23.18 miles (37.3 kilometers) per hour in the week ended Sept. 26, down from 25.27 mph a year earlier, according to the Association of American Railroads. It now takes 18 days for a train to make a round trip to the West Coast, up from 12 days two years ago, Krueger said.

Higher shipping costs are contributing to the erosion of the U.S. share of world exports, after high grain and oilseed prices in the past decade helped fuel expanded production in South America, Eastern Europe and Asia. The U.S. accounted for 38 percent of the global corn trade last year, down from 67 percent in 2006, while U.S. accounted for 36 percent of soybeans, down from 40 percent, USDA data show.