Bats Worth More Than $1 Billion to Corn Industry 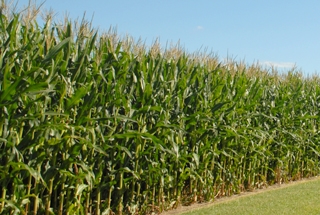 Carbondale, Illinois – In the grassy cornfields of Southern Illinois bats are on the hunt for insects, and according to new research, farmers have more than a billion reasons to be grateful for it.

Research published in the Proceedings of the National Academy of Sciences today confirms that bats play a significant role in combating corn crop pests, saving more than $1 billion a year in crop damages around the world. Bat Conservation International funded the two-year experiment in cornfields near Horseshoe Lake in Southern Illinois, conducted by graduate student Josiah J. Maine and his adviser at Southern Illinois University Carbondale, Justin Boyles.

To investigate the value of bats as agricultural pest control, Maine used custom built “exclosures” – netted structures aimed at keeping bats outside of them and away from the corn.

“The main pest in my system was the corn earworm, a moth whose larvae cause billions of dollars’ worth of damage to corn, cotton, tomatoes, and many other crops,” Maine said. “The larvae feed on corn ears, causing direct damage to yield, but they also can introduce an avenue for infection of the corn ear by fungi, which produce compounds that are toxic to humans and livestock.”

Keeping the bats out meant pests, such as the corn earworm, were largely free to reign havoc on the corn crops. But bats are not the only predators of these agricultural pests.  To ensure only bats were excluded by the exclosures Maine moved the structures twice daily so birds could forage normally.

“By consuming crop pests, bats have tremendous ecological impacts in crop fields. Based on the difference in crop damage I observed, I estimated that bats provide a service to corn farmers worth about $1 billion globally” Maine said.

“This was sort of a serendipitous discovery of this research,” Maine said. “I found that [bats] seemed to be suppressing the population of crop pests and thereby suppressing the abundance of the toxic fungus and also the toxins produced by that fungus.”

The implication of these findings serves as great news for agriculture and bat conservation alike said BCI Executive Director Andrew Walker. “Corn is an essential crop for farmers on over 150 million hectares globally. This research shows that by protecting bat species and their habitats we are not only furthering conservation, but also helping to secure a vital food source for communities worldwide.”

Boyles also hailed the study and its implications. “[This research] highlights the importance of maintaining a healthy and high functioning ecosystem,” said Boyles. “Bats are much maligned, but deserve protection if for no other reason than the ecosystem services they provide to humans.”

Bat Conservation International is a nonprofit organization with members in 60 countries and a growing range of international partners. Founded in 1982, BCI uses science, education and conservation action to protect bats and their habitats around the world. Learn more about bats and their critical role in maintaining healthy ecosystems and human economies at BCI’s website: www.batcon.org.