Best Times and Places to Apply Nitrogen to Boost Yields 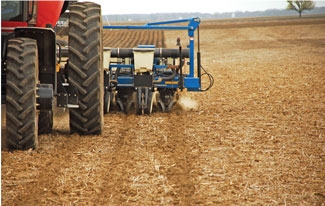 To achieve high yields, you have to keep the corn plant happy. From the beginning growth stages to harvest ready, the environment sets the tone. This is where the synergistic effect of the four R concept—right product, right rate, right time and right place—comes into play.  In 2014, the Farm Journal Test Plots dialed in to the nitrogen timing and placement strategies of the four R concept.

“When I talk about timing of nitrogen applications, I don’t necessarily mean when I apply, but rather when does the plant need it,” says Farm Journal Field Agronomist Ken Ferrie.

Approach your nitrogen program as a complete management system to meet the needs of the crop through black layer. Striving to meet that goal, the Farm Journal Test Plots showed a significant yield increase in 2014.

“Our goal is to find out how farmers can make their nitrogen dollars go as far as possible, especially in a year with tight margins,” Ferrie says. “In past test plots, we have seen 20 bu. to 60 bu. yield hits because we didn’t manage nitrogen effectively.”

In 2014, Ferrie and the test plots crew conducted two field trials in central Illinois to study nitrogen timing and placement. Before diving deep into the findings, it’s important to understand the plot details and protocol (see “Test Plot Details” below).The two fields are located within 30 miles of each other but vary in crop rotations, tillage practices and soil types. When applied using the planter, the nitrogen was turned on and off with the planter pass. On the same day, immediately after planting, nitrogen was broadcast surface-applied, which is also referred to as pre-emergence broadcast. The broadcast used in both plots was not protected by inhibitors.

The first test plot located south of Weldon, Ill., is a season-long effort comparing four timings of nitrogen application: pre-emergence broadcast,preplant strip-till, nitrogen applied with the planter and sidedress nitrogen. All of the nitrogen, except the sidedress application, was applied using different rates and timing combinations. The strip-till treatments were applied using a Great Plains Nutri-Pro toolbar with coulters 8" apart, placing the banded nitrogen 4" on both sides of each row and 3" from the surface. The nitrogen applied at planting included in-furrow starter fertilizer and 28% applied 2" to the side and 2" below the surface. Overall, the same total rate of nitrogen was applied but at different timing combinations.

At farm site #1, the yield goal was 220 bu. per acre, with a 190 lb. total nitrogen application program. Following Ferrie’s protocol to determine a crop’s demand for sidedress nitrogen, he and his crew collected soil nitrate samples a week before sidedressing. The results showed the field needed 220 lb. of nitrogen to meet the yield goal.

“Pulling nitrates is essential to make sure you give the crop the amount of nutrients it needs,” Ferrie says. “These tests allowed us to adjust the nitrogen before sidedressing.”

Boots on the ground to monitor the crop and weather provide a better idea of how nitrogen affects final yield, Ferrie says. Ground truthing and pulling nitrate samples is important, as growing environments fluctuate every year.

In the sable silty clay loam at farm site #1, there was a 39 bu. gain from split-applying nitrogen compared to the 220-lb. sidedress application. Even though the 220-lb. sidedress application hit the 220 bu. per acre yield goal, you can’t put all of your effort at the back end of the crop and neglect to give the crop a strong start, Ferrie says. To reach full yield potential, the crop needs nutrients from the time the seed hits the ground to sidedressing. If plants get behind because there is not enough nitrogen, you could forfeit yield you can’t get back. A nitrogen program should supply the corn with what it needs up front to keep the plant from slowing down in the early growth stages.

The chart below not only shows a 39 bu. gain by split-applying nitrogen, but it also presents other important takeaways. Note the broadcast applications on the left side of the chart yielded less overall than the banded applications. The more banding—strip-till, planter-applied or sidedress—the stronger the response.

Excessive rainfall led to the obvious affect of banding at farm site #1. In June 2014, the field was hit with 6.9" of rain in a 13-day period, putting some areas in the field at a higher risk for nutrient loss. The heavy rain moved nitrogen through the plant at a much faster rate, and it leached into the soil to create a nitrogen deficiency.

“We were able to see the strong response to banding nitrogen as a result of the 6.9" of rain that hit the corn at the V5 growth stage,” Ferrie says. “This response demonstrates how we were able to weatherproof the field and manage nitrogen on the back end of the crop.”

In this particular instance, where the environment presents harsh conditions, it’s important to ground truth fields. Proactively monitor the weather and look for physical symptoms of nitrogen deficiencies in order to adjust your overall nitrogen program.

A second point worth mentioning: The yellow and tan colored bars include the total pounds of nitrogen applied, which are all more than the original 220-lb. nitrogen program. The additional nitrogen was applied to prove nitrogen was not the limiting factor.

“A corn plant will hit its limit, so going above 220 lb. of nitrogen will not add up in yield,” Ferrie says.

Overall, at farm site #1, the yield results reinforce the importance of taking care of the front end as efficiently as possible and increasing rates on the back end.

Although the two Illinois locations show similar yield gains, it’s important to dial in on the differences between the fields. The second test plot, located north of Heyworth, Ill., compares the same four timings of nitrogen but in a corn-on-corn scenario. In a heavy residue growing environment, focus on paying the carbon penalty on the front end. See the visual symptoms in corn on corn at the V3 stage in the two photos above.

Strip-till and planter-applied nitrogen bypass the carbon penalty by keeping the plant happy while the microbes immobilize nitrogen to decompose the residue, Ferrie adds. Due to timing, those placements trigger less decomposition of surface residue and are less susceptible to nutrient tie-up.

Application timing depends on geography as well. Southern farmers who want to conserve residue should consider banded applications because they don’t speed up decomposition of surface residue, Ferrie notes.

Farm site #2 had a higher yield environment compared to farm site #1. The yield difference is due to hybrid characteristics, Ferrie notes.

Similar to farm site #1, the second plot location also increased overall nitrogen for the entire season. The yield goal was 220 bu. per acre with a 224-lb. overall nitrogen program. After pulling nitrates, the field showed it needed an additional 25 lb. of nitrogen to reach the yield goal.

As shown in the chart below, there was a 24 bu. increase to split-applying nitrogen and managing the front end of the crop and a 30 bu. gain to managing the back end. In the first bar of the chart, the corn was taken care of on the front end, but the 70 lb. sidedress rate was not enough to carry the crop to the finish line. These late season deficiencies in corn directly result in yield loss. Farm site #2 shows the importance of striking the balance of managing the front end of the crop but punching the sidedress rates higher to have the staying power until the end of the season. At this location, excessive rainfall did not play a role in nitrogen loss like it did at farm site #1. In the same 13 days in June 2014, this field only received 2.9" of rain.

Nitrogen rates at both plot locations show positive benefits to efficiently managing the front end and pushing the majority of the nitrogen program to the back end to finish off the crop.

In the sandy loam soils of Jonesville, Mich., Farm Journal Associate Field Agronomist Missy Bauer found similar yield data in her first year of nitrogen timing and placement plots. To take care of the carbon penalty up front in the irrigated, corn-on-corn field, 30 lb. of dry ammonia sulfate was applied and 35 lb. of nitrogen was added to the 2x2 starter blend. These applications took care of the corn on the front end. The field also received two applications of nitrogen through fertigation at the V10 to V12 growth stages and again at tassel.

Similar to the Illinois field trial, this particular plot resulted in a 21 bu. average gain by using high sidedress rates on the back end of the crop. Yields consistently showed a decrease with less pounds of nitrogen sidedressed. Ultimately, the higher the sidedress rate the higher the yield.

In the second field location near Coldwater, Mich., which has higher organic matter and CEC compared to the first plot, there was an 8.5 bu. jump using 60 lb. more at sidedress compared to having it up front. This irrigated field is also planted in a corn-on-corn rotation, with 30 lb. of dry ammonia sulfate and 35 lb. of nitrogen in the 2x2 starter blend. The corn also received two fertigation applications at V12 and R2.

“In sandy loam soils, we found side- dress rates and late-season nitrogen play a major role in gaining bushels on the back end of the crop,” Bauer says.

The secret to success is applying nitrogen at the right time and place and managing the plant from emergence to black layer.

“Ultimately, if you allocate your nitrogen dollars during crucial reproductive stages, you can raise more bushels with the same pounds of nitrogen all the way to 220 lb.,” Ferrie says.

Of course, 2014's favorable weather conditions across the Midwest played an integral role in the success of nitrogen timing and placement. Both plots in central Illinois had a 220-bu. yield target, which was surpassed by 39 bu. at farm site #1 and 55 bu. at farm site #2.

“With a growing environment such as (2014), even if you take the lowest yield from the plots, we outyielded the field’s potential,” Ferrie says. “However, it’s important to have your ducks in a row because if the environment changes, you need to be ready to respond with a well-rounded nitrogen program to capture as many bushels as possible.”

What Ken Ferrie Thinks You Need to Know

Thank You to Our Test Plot Partners

You can count on our test plots to be conducted on real farms with real equipment using a high-touch set of protocols. The information will be completely independent and actionable. Our hands will always be in the dirt researching the production practices and technology that are best for you. To learn more, visit www.FarmJournal.com/testplots