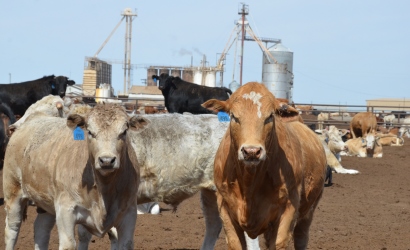 It’s no question that beta agonists are an efficient way to add beef to the market, but what about the animal welfare concerns?
The beef industry is more than a year removed from the turmoil of last August that saw reports of severely lame cattle showing up at packing plants and in a few cases even losing hooves. Consumers and producers had many questions. What was the cause? Who was to blame? What impacts would it have on the industry?

Tyson Foods first announced the company would no longer accept cattle fed Zilmax (zilpaterol hydrochloride) and the other major packers followed in short order. Merck Animal Health then opted to temporarily take Zilmax off the market until more research could be done.

Dan Thomson, veterinarian and director of the Beef Cattle Institute at Kansas State University, has been on the ground floor of animal welfare research involving zilpaterol.

Thomson went to the packer with a group of other researchers to conduct necropsies, gather tissue samples, and watch video of the cattle’s movement to help determine what was happening. He says the hoof sloughing issue captured the headlines, but the real concern was the muscle tremors and stiffness witnessed in 10% of a pen of 200 cattle taken to slaughter.

“There is a difference in these animals when they are going through this metabolic meltdown or fatigued cattle syndrome than what we see with animals that have an acute injury,” Thomson says.

The difference was revealed to be in the stress levels for the cattle that were euthanized. Normal range for creatine phosphokinase (CPK) is 159 to 332 international units per liter (IU/L), but the levels of the affected cattle were between 5,000 to 8,000 IU/L.

After finding these results, Thomson dug deeper into the cattle stress and conducted a study at Kansas State with a group of steers fed without beta agonists. Two other groups were fed, one with zilpaterol and the other with Optaflexx (ractopamine). 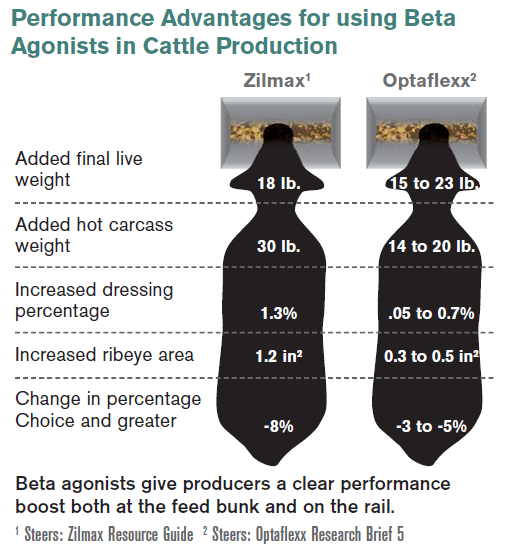 “We wanted to look at the effect of beta agonists on heart rates and cardiac physiology because of the reports at feedyards,” Thomson says.

Blood was pulled from the steers throughout the study to analyze various stress levels. The cattle were also equipped with ECG monitors for 24-hours to measure cardiac rates and arrhythmias.

“These animals were under no stress,” Thomson adds. “Their creatine caenise levels were the same regardless of the group. Their lactate levels were in a normal range.”

Similarly, blood was taken from the cattle at the time of slaughter to see if there was an effect from shipping, but no significant differences were observed.
The pork industry went through a comparable situation with ractopamine, but it did not come under the public scrutiny Zilmax has gone experienced.

A study at the University of Illinois showed pigs fed ractopamine that did not suffer from fatigued pig syndrome had similar stress levels in their blood as pigs fed without ractopamine. Much like in cattle, the downed hogs did show elevated stress levels.

Of the aggressively-handled animals those that suffered from fatigued pig syndrome had CPK levels that were double of the non-downed hogs.

“The animals at risk were the heavier muscled animals, the heavier out-weights and those that came from farms with poor hog handling,” Thomson adds. Pigs and cattle going through these fatigued symptoms all resembled tying-up in horses. “I think it makes a natural, common story to what is going on as we increase muscle mass and the out-weights of cattle.”

While all of the research Thomson has done and what occurred in the pork industry may seem new, it isn’t. A study was performed in 1973 that looked at stress in double-muscled cattle compared to their normal counterparts.

“At the end of the study, double-muscled cattle responded more negatively to stress than normally muscled animals regardless of the type of stress they were exposed to,” Thomson says.

The double-muscled cattle had catastrophic increases in lactic acid and CPK, some even died during the study.

“Let’s start fixing the problem and not continue to keep pointing fingers and have fights,” Thomson says. “There are long-term stresses that we’ll have to look at with these cattle coming into feedyards. By long-term I mean the last 30 days on feed.”

Areas of to look at during that period include stress-incurred because of sorting pens, pushing cattle too hard to gain weight and heat stress. “The big one, and the one I would start with immediately, is what we do on the day of shipping,” Thomson says. “Animal handling at this point in time is probably as important as it ever is in a cattle finishing facility.”