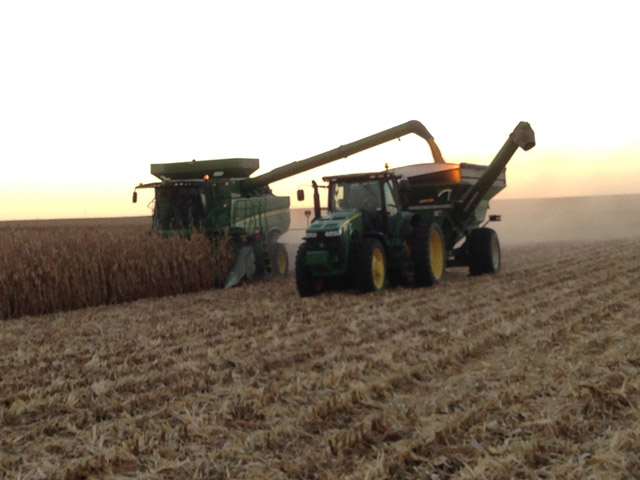 In a cornfield near Monroe in central Iowa, farmer Steve Nearmyer sees yields that make him believe his average could push over 200 bushels per acre.

It could be the best results he's seen in about 30 years of farming, and it jibes with government estimates that Iowa farmers will harvest their biggest corn crop in nearly 150 years of record-keeping.

But the state's bin-busting bounty could create challenges — for farmers, the industry, and potentially for Iowans heating their homes, The Des Moines Register reported.

Here's why: Iowa's corn harvest is nearly three weeks behind the normal pace, and much of it is wet, meaning that elevators across the state will need to dry it. That takes a lot of fuel, both natural gas and propane. A wet harvest last year, combined with transportation bottlenecks, pushed propane prices to record highs, hurting Iowa consumers.

It resulted in Iowa Gov. Terry Branstad and Texas Gov. Rick Perry calling for states of emergency to ease transportation, improve supplies and ease costs. Since then, congressional and government leaders have pushed for changes to prevent another crisis.

Officials are hopeful Iowa will be able to avoid skyrocketing prices this year, given improved supplies; added propane storage at homes, elevators and retailers; and increased rail cars to transport fuel. But spot shortages last week in Iowa — resulting in long lines for fuel — have some elevator leaders and others worried.

"I'm concerned ... about whether they will be able to get enough propane in here," said Tracy Gathman, general manager of the Two Rivers Cooperative in Pella. The elevator provides propane to about 3,000 customers.

Supplies might be adequate, but the challenge is getting them where they need to be, Gathman said. "We're all taking crops across the upper Midwest at the same time," creating a potential crunch, he said.

Iowa's corn harvest is just getting started. Farmers recently had combined just 20 percent of 2.4 billion bushels of corn, the most recent production estimate from the U.S. Department of Agriculture. The state is expected to provide nearly 20 percent of the country's record 14.5 billion bushels.

Iowa farmers were about two-thirds finished with what's expected to be 504.4 million bushels of soybeans, the state's second-largest crop ever.

Just finding space to put all the grain will be a challenge. Iowa State University professor Charles Hurburgh expects to see a record amount of corn piled across Iowa.

He said it comes down to numbers — the bushels of corn and soybeans on hand going into harvest, combined with crops taken off fields this fall, compared with the space available, both on farms and off.

It's tight, Hurburgh said. Iowa has storage for 3.45 billion bushels of grain, and the state will need space for about 3.24 billion bushels, USDA data show.

It's unlikely, he said, that storage will be exactly where it's needed. "We won't have enough storage space in Iowa to put all the corn and soybeans in," said Hurburgh, who leads ISU's Iowa Grain Quality Initiative. "We've outgrown our capacity."

That's even with a nearly 30 percent increase in space in elevators and bins on farms over the past decade, data show. "Storage space always lags demand," Hurburgh said. "If you're going to spend a couple million bucks on a million-bushel bin, you want to make sure it's full ... You don't want a bin that's full of air."

Iowa allows elevators to temporarily store corn on the ground. But it has to be adequately dried and protected; otherwise it could spoil, resulting in millions of dollars in losses. "Hopefully, the grain won't be out there long," Hurburgh said.

Complicating things more is trouble moving grains across the country. Production in the Bakken oil fields has resulted in large demand for locomotives that could be used to move grain. And Iowa and other Midwestern states no longer receive propane that was transported through the Cochin pipeline. It's been reversed to take products back to the booming oil industry in Canada. The pipeline provided Iowa with about 13 percent of its propane supply.

Deb Grooms, executive director of the Iowa Propane Association, said the Midwest has about 4 million barrels more propane this fall than at the same time last year. It's slightly above the five-year average. And the industry has added about 900 more rail cars to help meet demand, she said.

Despite the measures, an industry report says possible rail congestion, among other factors, could lead to "continuing market and price volatility" in the Midwest during peak demand periods.

Iowa and other states were hit hard early by freezing temperatures, the "polar vortex" that remained for months. Last year was the 25th-coldest in 141 years of record-keeping in Iowa.

The forecast for this winter is mixed, a propane industry report says: The U.S. Energy Information Administration expects a milder winter, while other sources forecast a colder season.

Grooms and Harold Hommes, who tracks fuel prices at the Iowa Department of Agriculture, said Iowa is better prepared for problems. Elevators, farmers and other rural consumers have added propane tanks, and more people have entered into contracts that set the price for fuel, protecting them from spiking winter prices.

Gathman said Two Rivers nearly doubled its propane storage to reduce the potential for price increases for customers. Last year, he said, "the people who could least afford it were the most affected. It was unfortunate."

One advantage in Iowa, said ISU's Hurburgh and others: A large portion of Iowa corn and soybeans is consumed within the state — in food, ethanol and biodiesel, and feed for pigs, cattle and chickens — so a large portion doesn't need to be shipped long distances.

As much as 70 percent of Iowa's corn crop can be used to make ethanol and other products, Hurburgh said.

That's good news for farmers, who can be hurt by high transportation prices. It becomes part of the basis — the difference between the cash price a farmer gets at the local elevator and the price at the Chicago Board of Trade. For example, cash prices for corn at Iowa elevators are about 40 to 60 cents lower than the Chicago Board of Trade. The basis is even higher in North Dakota, where the difference is $1 or more because of high transportation costs.

Many Iowa farmers are already struggling to make a profit this year, with corn and soybean prices tumbling 30 percent over the past year.

"There's nothing to suggest the market will go on a tear and do anything to compensate farmers" for any added transportation costs, Hurburgh said.

Nearmyer, the Monroe farmer, said he's among those who locked in propane prices. The 53-year-old grows corn and soybeans on about 2,000 acres and runs eight pig confinements with his son-in-law and a cousin.

Propane is key to keeping the animals warm during the winter. "I was pretty concerned about it. I never want to get caught" in high seasonal prices, he said.--Donnelle Eller, The Des Moines Register