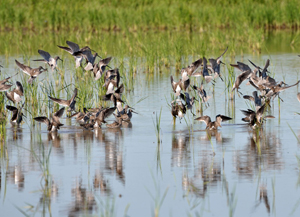 Deadly bird flu swelled in the poultry industry in Minnesota and neighboring Wisconsin amid speculation that winds may be carrying virus particles into facilities housing turkeys and chickens.

“This is a catastrophe for both the turkey and the egg industries,” William Rehm, the president of Daybreak Foods Inc., said after his company’s farm in Jefferson County, Wisconsin, with 800,000 egg-laying hens was infected by bird flu. “Some USDA veterinarians are starting to believe the virus is spreading from particulates in the air,” he said Wednesday in a telephone interview.

The U.S. Department of Agriculture on Wednesday confirmed that avian influenza was found in 13 turkey flocks in Minnesota with at least 430,300 birds. Since late 2014, the virus has been detected in commercial and backyard flocks with a combined estimate of at least 8 million birds, USDA data show. Migratory waterfowl along a Mississippi River flyway are believed by to be spreading the flu, agriculture officials say.

On a Minnesota visit, “there were 20 mile per hour winds, and you could see a lot of dust blowing,” John Clifford, the chief veterinary officer of the Washington-based USDA, said Wednesday on a media conference call. “So what we’re talking about is the wind carrying potentially feathers or dust or things that could be a carrier of the virus and moving it” to structures with poultry, he said.

Closely held Daybreak Foods, based in Lake Mills, Wisconsin, found evidence of the virus Tuesday during routine inspections, and the USDA confirmed avian influenza, said Rehm, the company president. The case was the largest of five reported in the state and the second-biggest chicken flock to be affected since the outbreak started late in 2014 in the U.S.

“We have put up the best biosecurity parameters to defend our facilities against the disease,” Rehm said. The company has facilities with 13.5 million hens in Iowa, Minnesota, Ohio and Wisconsin, which includes another operation in Jefferson County.

The U.S. Centers for Disease Control and Prevention says that the risk to people from bird flu is low, while infection is “possible.”

Avian flu “is not generally an aerosolized virus, it’s not spread easily that way,” Clifford of the USDA said. In Minnesota, the biggest U.S. turkey producer “because of the close proximity some of these facilities are to lakes and large populations of wild waterfowl,” high winds may be a carrier of the virus, he said.

The stricken Jefferson County site was quarantined, and remaining birds will be “depopulated,” according to a statement from the Wisconsin Department of Agriculture, Trade and Consumer Protection.

A flock of 3.8 million egg-laying hens in Osceola County, Iowa, was reported with the flu this week, the largest U.S. commercial case this year. The state is the nation’s top egg producer.

“We’re trying to determine the possible pathway of introduction into these houses,” Clifford said Tuesday on a media conference call with the Iowa Department of Agriculture. “My guess is it’s probably multiple pathways of entry.”

Before this week, the highly pathogenic virus primarily afflicted turkey flocks and is considered “extremely infectious and fatal,” according to the USDA.

Hormel Foods Corp., the owner of Jennie-O turkeys, said Monday that annual profit may be eroded because bird flu is hampering production. Hong Kong’s Centre for Food Safety banned the import of poultry meat and eggs from parts of Minnesota and South Dakota.

Almost 47 million young turkeys were slaughtered in Minnesota last year, a fifth of the U.S. total, USDA data show. Commercial flocks in the state are primarily raised indoors, according to the state’s board of animal health.