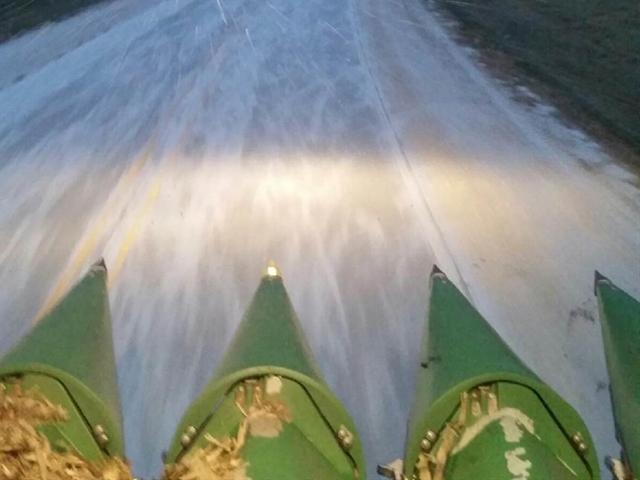 Iowa farmers used the five days suitable for fieldwork to harvest one-tenth of the state's corn crop during the week that ended on Sunday, according to the U.S. Department of Agriculture National Agricultural Statistical Service. Some cornstalks were baled and manure was hauled.

The 93 percent of the corn acreage harvested was equal to 2013, but two days ahead of the five-year average. It marked the first time this season that the corn harvest was ahead of the normal pace.

The corn harvest in south central Iowa continued to trail behind the rest of the state with only 79 percent complete.

"The snow and bitter cold weather creates challenges for farmers that still have crop in the field," said Iowa Secretary of Agriculture Bill Northey.

Grain movement from farm to elevator was rated 48 percent moderate to heavy, dropping 12 percentage points from the previous week.

Hay and roughage supplies were estimated at 97 percent adequate to surplus. Cold and snowy conditions tested livestock and some farmers have started to feed hay.

An inch or more snow accumulated across all but extreme southeast edge of the state.

Soils were frozen to a depth of two to four inches below the surface as of Sunday.--George C. Ford, The Gazette, Cedar Rapids, Iowa

Tags:
WEATHER
The Role of Veterinarians and Nutritionists as Consultants for Dairies
Are All Bets Off for Phase One Trade Deal with China?
Jerry Gulke: Letting Time Pass May Pay Dividends
Controlling Internal Parasites with Safeguard
Survey Highlights Farmers’ Concerns About Live Events