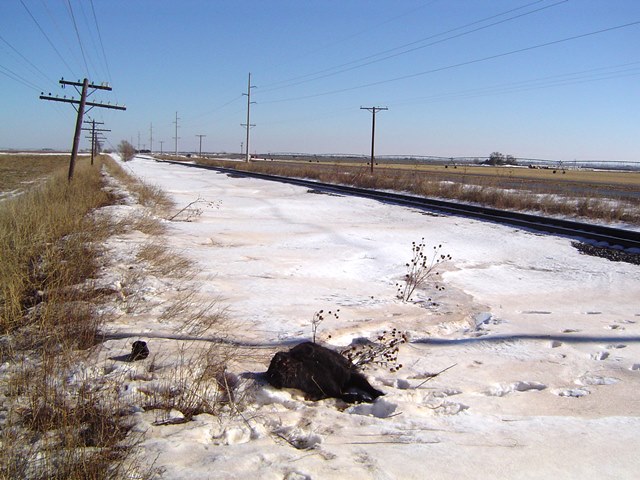 Winter storm Goliath left a wave of dead and stray beef cattle in its wake as the blizzard pushed across the Panhandle region of Texas last week.

Officials with Texas and Southwestern Cattle Raisers Association (TSCRA) estimate 4,000 feedlot cattle died from the storm, with another 6,000-8,000 stocker cattle perishing on the High Plains. Those numbers still could rise as snow drifts continue to melt, revealing more dead cattle from the Dec. 26 storm.

Muleshoe, Texas, rancher Blake Birdwell witnessed the devastation first hand, losing 15 cows to one snow drift. The Hip O Cattle Co. owner has at least another 100 dead out of the stocker cattle he custom grazes and partners on, in addition to his own cow-calf loses.

Birdwell manages 13,000 cattle primarily grazing on wheat pasture, and he was short 10,000 head after the blizzard swept through. He describes the aftermath as “mayhem,” but notes the storm has brought the best out in people who are helping locate lost cattle.

“There’s stockers, cows, calves, horses…heck I even helped gather a llama in stuff we had thrown together the other day,” Birdwell says of the effort to roundup stray livestock. 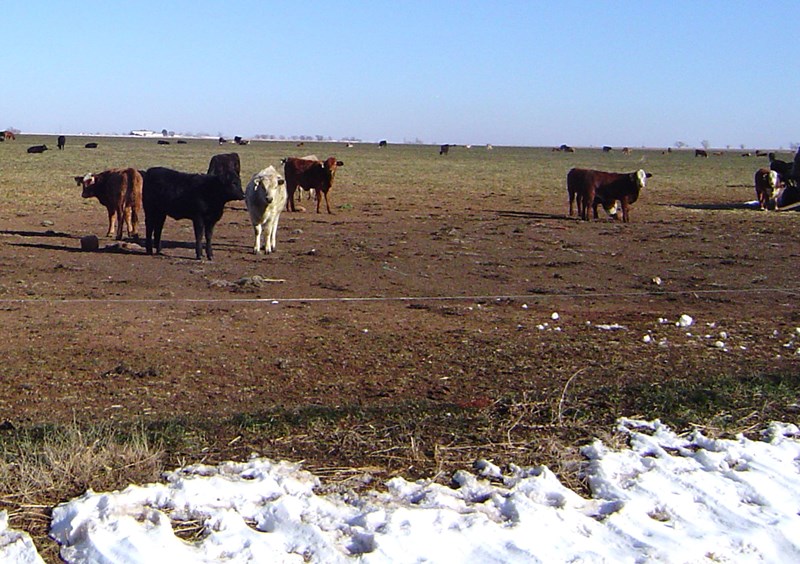 These stocker cattle grazing wheat pasture on Jan. 2 outside Oklahoma Lane, Texas, are contained like many cattle in the region with electric wire fence. Texas A&M AgriLife Extension Service photo by Ted McCollum

Right after the blizzard approximately 25,000-40,000 cattle went missing from the storm impacted areas. Many cattle left pastures simply by climbing barbed wire fences covered with snow drifts. Others were able to escape wheat fields lined with electric fence that lost power during the storm.

When the cattle escaped they generally head south from their home pastures to get away from the blowing snow and seek shelter.

Birdwell had one group of stocker calves travel 70 miles, starting out north of Nazareth and ending up south of Shallowater.

Special Rangers with Texas and Southwestern Cattle Raisers Association are lending a hand to livestock owners as they help identify stray cattle and check brands. Also, they are assisting other producers to locate owners of livestock lost in recent winter storms.

Scott Williamson, who serves as the supervisor for Region 1 with TSCRA,  has been based in Lubbock to support cattlemen with gathering livestock. Additional rangers from TSCRA have been called in forming a six-person team to contribute with the efforts.

“We’re assisting producers who have comingled cattle. The first efforts were just to contain the livestock that had strayed out,” Williamson says.

It snowed 8-10 inches in the region with winds ranging from 60-85 mph., creating those massive snow drifts. The worst affected areas have been running north between Interstate 20 to 40 along the New Mexico border and Interstate 27, Williamson said.

Many cattle are out on wheat pasture or crop residue right now. Working pens are hard to find. The roads are too muddy or drifted in to bring mobile corrals or stock trailers. It means the majority of stray cattle are commingled into groups and sorted on horseback. Then they are trailed back to separate pastures.

Some fields had up to 500 cattle from multiple owners.

“It is going to be a slow process getting it all sorted out, but it seems to be going well,” Williamson says.

There has been no evidence of theft at this point. One animal was found butchered.

Word of mouth, cell phone calls and social media have all helped in getting lost cattle back to their owners.

Feedlots haven’t witnessed massive losses like those seen by dairies in the region that lost approximately 40,000 cattle. According to the Texas Cattle Feeders Association (TCFA), nearly 28 percent of the fed cattle in the U.S. can be found in the Panhandle region, including New Mexico, Oklahoma and Texas. Initial estimates by TCFA project just .2 percent of those cattle on feed dying during the storm.

Bartlett Cattle Company in Tulia, Texas, had minimal death loss and feed alleys running north-south likely helped as it limited the amount of drifting. Some pens did have large drifts creating areas for calves to crawl between pens or escape entirely.

Jim Lovell handles cattle procurement and marketing for Bartlett out of Canyon, Texas, and credits the great employees at the feedlot for managing the cattle through the storm. “We had a crew there from Saturday night all the way to sometime on Monday or Tuesday,” he adds. 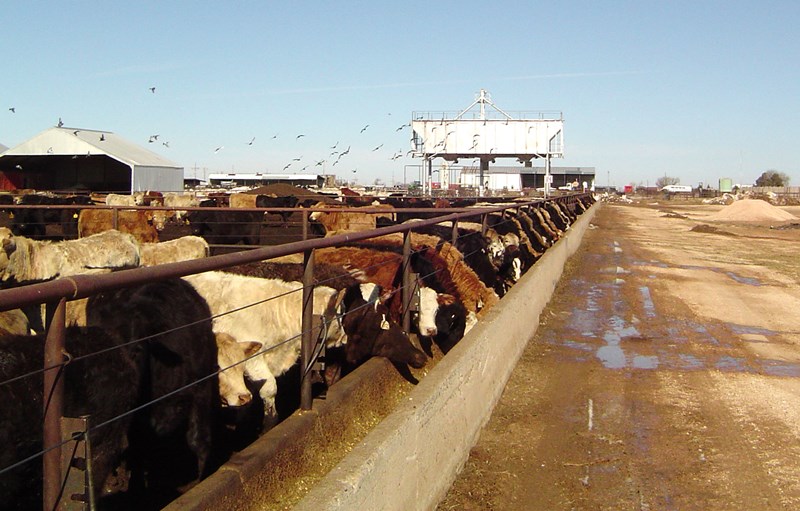 Cattle at this Clovis, N.M., feedlot fared well with lots drying down on Jan. 2 after the snow was removed. In the distance a pile of snow can be seen. Texas A&M AgriLife Extension Service photo by Ted McCollum

The crew helped keep roads open, put feed out, and took care of the cattle all through the blowing snow.

“We’ve got some really good people in our industry who care about these animals and work hard to take care of them,” Lovell says.

Serving as TCFA President-elect, Lovell has heard that feedyards with east-west running bunk lines had a much tougher time getting feed to cattle. “If you had bare land around your feedyard there was nothing to stop that snow until it hit a fence or bunk to slow it down.”

The storm could impact local cattle sales for the short run, but larger auction markets in Oklahoma City and Dodge City, Kan. didn’t seem to be affected, says Lovell.

Health problems are another concern for cattle that weathered the storm. Birdwell has been doctoring cattle as he finds them.

“We had a lot of fresh calves turned out when this thing hit. We saw a lot of deads due to the storm and we’re starting to have lots of sick cattle break,” Birdwell says.

Williamson echoes those thoughts, saying it could bring another round of sick cattle with respiratory problems. “I think that will be an issue to watch in the next week or two.”

Tongue-in-cheek, Lovell described the storm as the “Christmas gift that keeps on giving.” He says feedlots will have a lot of muddy pens and snow to handle. The threat of more storms from El Niño is another concern. Fed cattle gains will be down compared to typical years, meaning more days on feed and increased costs.

“Production will be lost, not only from sick animals but healthy ones, too. It takes more feed, protein and energy to maintain those cattle in cold, wet, muddy pens,” Lovell said.

The problems won’t go away anytime soon for cattle on pasture, either.

“We’re a month away from seeing an end to this,” Birdwell says of gathering lost cattle. “We’ll see the effects of this blizzard all the way into May when we ship these cattle off. There will still be cattle that turn up then, so we’re a long ways off from being done.”