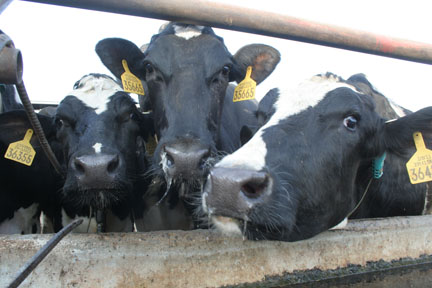 Most producers were unaware their herd was at risk.

A blood calcium sampling program involving more than 5,000 transition dairy cows showed subclinical hypocalcemia in an average of 55 percent of the cows tested. In most cases, producers were unaware their herd was at risk, since this form of low blood calcium often goes undetected.

When dairy cows experience a drop in blood calcium concentrations around the time of calving, but not low enough to be considered milk fever, it is classified as subclinical hypocalcemia, a condition that can still have a negative impact on dairy cow health and milk production.

The ongoing blood calcium sampling program has been conducted at more than 200 U.S. dairies over the past 2½ years by the Dairy Technical Specialist (DTS) team from Prince Agri Products Inc. Michigan State University analyzed the samples to determine if serum total calcium levels had fallen below the traditional threshold for subclinical hypocalcemia of 8.0 mg/dl. Recent research has indicated that this threshold should be raised to 8.5 mg/dl, the level at which negative health effects actually begin to appear.

When blood analysis indicates subclinical hypocalcemia, the Prince Agri Products DTS team works with dairy producers and their nutritionists to help implement a negative dietary cation-anion difference (DCAD) diet. A negative DCAD diet has been proven to be one of the most effective courses for maintaining normal blood calcium levels in postpartum dairy cows. The DTS team periodically monitors urine pH to ensure the cows are fully acidified.

Ken Zanzalari, a Prince Agri Products Ph.D. nutritionist who oversees the blood monitoring program, says calcium is the most important mineral nutrient responsible for the well-being of a recently fresh dairy cow, because preparation for calving causes a sudden demand for calcium to be deposited into milk at the outset of lactation. He recommends that blood calcium concentrations be taken within the first 48 hours after calving.

"The importance of maintaining adequate blood calcium concentrations in the transition dairy cow has often been forgotten and overlooked," says Zanzalari. "Although the average cost of subclinical hypocalcemia is $125 per case compared to $300 for milk fever, the total economic impact is much greater because, on a typical dairy farm, the incidence of subclinical hypocalcemia is up to 15 times greater than clinical milk fever cases."

Left unchecked, subclinical hypocalcemia can lead to such metabolic disorders as displaced abomasums, ketosis, retained placenta and mastitis, as well as reduced milk yield. Research has shown that cows that were subclinically hypocalcemic within the first week of lactation produced 5.7 pounds less milk than non-hypocalcemic cows. In another study, prepartum cows fed a negative DCAD diet produced 16 percent more milk during the first 21 days of lactation compared to cows fed a non-DCAD diet.

In addition to supporting dairies through its blood monitoring program, Prince Agri Products also offers Animate®, a nutritional specialty product that has proven effective in helping to reduce the risk of low blood calcium when fed a minimum of 21 days before calving as part of a negative DCAD diet. It also has been shown to maintain dry matter intake because of its palatability.