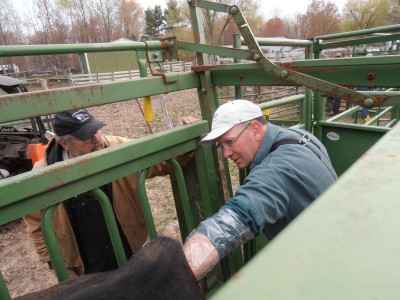 Follow the potential routes of spread of BLV like a bloodhound!
By: Phil Durst, Michigan State University Extension

The prevalence of Bovine Leukemia Viral (BLV) infection has been increasing in dairy cows over the past 40 years, from approximately 10 percent of all United States dairy cattle in the 1970’s to about 50 percent. At that rate, it may seem that all dairy cattle will eventually become infected. How does it spread and what can be done about it?

In this fourth in a series of articles about BLV from Michigan State University Extension we examine how the disease is spread.

BLV infects lymphocytes, a type of white blood cells that are part of the animal’s immune system. The virus integrates its genetic material into the DNA of the cow’s lymphocytes then causes the lymphocyte to multiply. Most transmission of BLV occurs when infected lymphocytes are transferred to an uninfected animal.

The two primary means to transfer lymphocytes are through blood and in the milk and colostrum from the infected cow. We can understand about milk and colostrum being given to a calf, and we’ll discuss that in a separate article, but how is blood transferred among cows?

It doesn’t require a blood transfusion to infect an animal; all it takes is a microscopic amount of blood being transferred from one animal to another. And microscopic transfer of blood is easier and more common that we would like to think.

BLV in cattle and HIV/AIDS in people are both retroviruses, and their transmission via blood is essentially the same. Use what you’ve learned about ways that HIV can spread to remind you of ways that BLV can be spread among cattle.

Shared needle use is one of those transmission means that are common in both diseases. Using the same needle for multiple injections while vaccinating or doing reproductive synchronization risks transferring a microscopic amount of blood from an infected cow to another cow, enough to infect her. MSU Professor Dr. Ron Erskine showed that herds which re-use needles on multiple cows tend to have higher rates of BLV.

Likewise, blood from penetration through the rectum is another major pathway of disease transmission. Rectal palpation has been shown to cause minute amounts of bleeding a relatively high proportion of times. That blood, retained on a palpation sleeve that is then used in another animal can transfer the disease.

This is the case even when you don’t see any blood on the sleeve. Microscopic blood is called “occult”, or hidden blood. While you can’t see it with your eye, testing can reveal it. Using a commercial fecal occult human blood kit, Jennifer Roberts, Michigan State University College of Veterinary Medicine, conducted a study testing sleeves after palpation of cows and heifers by three veterinarians doing ultrasound examination. On average, sleeves tested positive for blood 23 percent of the time after palpating a single cow, and 38 percent of the times after palpating a heifer. She concluded that blood exchange following palpation is common and offers the potential for BLV transmission.

Given the common practice of using the same sleeve for multiple animals, at least until blood is visually observed, this could be a major risk factor for spread of the disease.

Natural service is also a means of transmitting the disease through blood. Trauma to the penis and vaginal tissue can result in enough bleeding to transfer infected white blood cells to the other animal. It can be transmitted this way either from the cow to the bull or from the bull to a cow.

In a Michigan State University study, Grooms took blood samples from 363 bulls at the time of breeding soundness examinations. The prevalence of BLV in young bulls, sampled before breeding age was nearly zero. In active breeding bulls, the rate of BLV positives increased with age to a high of 66 percent in bulls 5 years of age or older. While this is not proof of a cause and effect relationship between breeding and disease transmission, it certainly suggests that transmission may occur during natural service. It is also consistent with what we know about retrovirus transmission and helps explain why Michigan herds that only use AI have lower rates of BLV.

Other potential means of microscopic blood transfer, and therefore BLV transmission, include biting flies and tools for tattoos and tail docking.

Like a detective, you need to follow the blood trail to see how BLV is being transmitted in your dairy or beef herd. BLV doesn’t spread like soft butter; it usually involves a lot of help from producers, veterinarians, A.I. technicians and others. Maybe it is time we stopped helping.

Other articles in this series: