BLV: If that Wasn’t Enough! 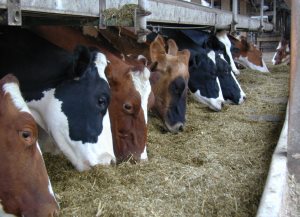 The more we learn about the impact of BLV on cows, the worse it gets.
By: Phil Durst, Michigan State University Extension

For a disease that most thought was inconsequential, the costs of BLV infection are starting to add up. In a Michigan State University Extension article entitled BLV: Undercutting the Foundation of Health, we discussed the impact of BLV infection on suppressing the immune response of cows. But, that’s not all!

Recent research at Michigan State University has demonstrated other measureable impacts that may shake the complacency that we have had in regard to this disease. Studies have now shown that BLV-infected dairy cattle produce less milk and they leave the herd sooner.

It is not dramatic, but BLV-infected herds produce less milk as the prevalence of the disease in the herd increases. The research showed that for every 10 percent increase in the herd prevalence of the disease, herd average milk production decreased 209 pounds. As an example, a 500-cow herd with 50 percent prevalence of BLV, produces, on the average, 836 pounds of milk per cow less than a herd with 10 percent BLV prevalence. Per 500 cows, that is 4180 hundredweights of milk less annually. If the value of that milk is $18 per hundredweight, then that is more than $75,000 less milk income per year because of BLV. Suddenly BLV is not just about tumors anymore.

But that’s not all! Maybe the greatest financial impact of BLV in a herd is the reduced longevity of infected animals within the herd. In work conducted by Bartlett et al., at MSU, BLV-infected cows were followed for 20 months to learn what happened to those cows within the herds.

The results are plain; BLV-infected cows left the herd, either as culls or because they died, at a faster rate than their uninfected herd mates. In fact, BLV-positive cows were 23 percent more likely to have left the herd within the 20-month period they were followed. If profitability depends on cow longevity, then farms with higher prevalence of BLV-infected cows are taking a big hit in profitability.

But not all infected cows are equally impacted. One of the surprising results was that milking heifers (first lactation) showed no significant difference either in milk production or longevity compared to BLV-negative cows. But as infected cows got older, and as the disease developed, and particularly, as the test results of BLV antibodies increased, milk production decreased and the risk of being culled increased.

Tumors may be the most visibly apparent impact of BLV-infection, but they represent the proverbial “tip of the iceberg” with many more cows having reduced milk production and an increased risk of prematurely leaving the herd.

The problem with icebergs is that they tend to sink ships. That’s something to think about. For more information, visit the BLV website.