BLV: What is Best for the Calves of BLV-positive Dams? 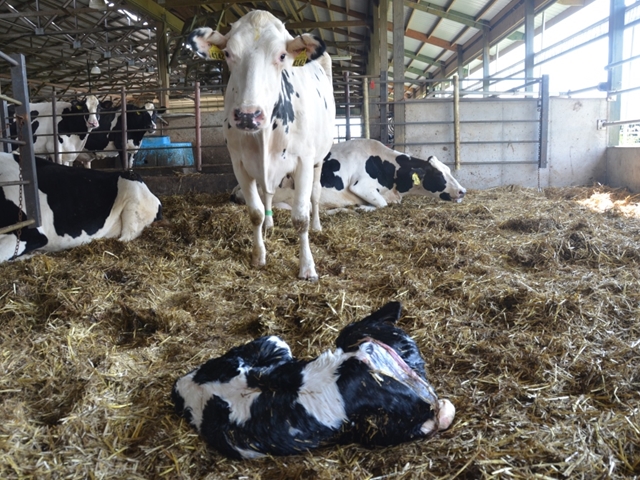 Colostrum and milk can be a means of transmission of BLV within a herd, or not.
By: Phil Durst, Michigan State University Extension

Sometimes, what seems like the best thing, is not the best thing. That may be how it is when it comes to feeding colostrum from BLV-infected dams. Let’s review first.

In a previous Michigan State University Extension article (BLV - following the blood trail of transmission), we discussed the fact that white blood cells from infected cows carry the genetic material for BLV. White blood cells are part of the somatic cells naturally found in milk and colostrum. Based on that, one could conclude that it would be best to identify positive dams and not feed their colostrum to calves as a way to prevent transmission of BLV. Not so fast.

While it is true that colostrum and milk from infected cows can be a means of infecting calves with BLV, at the same time, colostrum from infected dams carries antibodies produced in response to BLV that can protect calves from BLV infection for about the first 6 months of life. Therein lies the dilemma.

If we discard the colostrum from BLV-infected cows because of the risk of transmission from lymphocytes, we are also preventing calves from receiving the antibodies than can provide them protection.

This dilemma is easily solved because we can protect calves from the risk of BLV and give them protection by treatment of the colostrum. Freezing and then thawing of colostrum will destroy the virus, but not the protective antibodies. The physical process of freezing and thawing breaks open the lymphocytes containing the viral genetic material. However, make sure that the colostrum is frozen solid all the way to the middle of the bag or container.

Michigan State University Extension does not recommend feeding raw pooled colostrum waste milk to calves because of the risk of disease introduction from one infected cow to multiple calves. Feeding pooled fresh colostrum is probably the worst idea, because it will probably have enough virus to be infectious, but not enough anti-BLV antibody to provide any real protection. Pasteurization of raw milk reduces the risk of disease transmission and is highly recommended.

Proper treatment of colostrum and milk from infected cows is one step in reducing the transmission of BLV (as well as other diseases, such as Johne’s Disease) within your herd. It is an important first step in the control of BLV on your farm and when incorporated with other management practices, can make a significant impact on controlling this important disease. We will cover other management steps in a future article.

In regard to BLV reduction, its time to take your first step!

Other articles in this series: