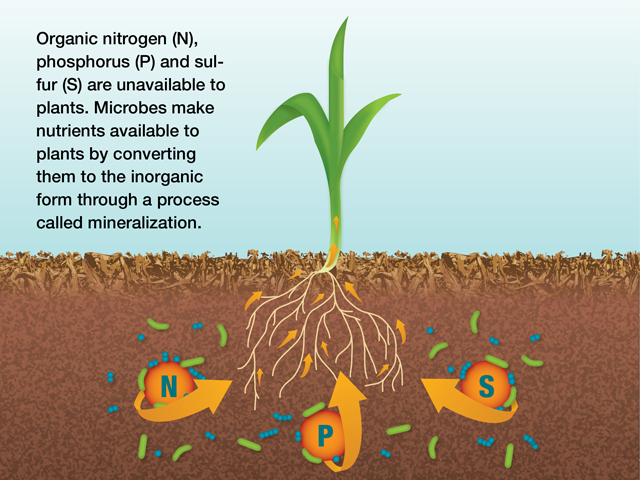 Organic nitrogen (N), phosphorus (P) and sulfur (S) are unavailable to plants. Microbes make nutrients available to plants by converting them to the inorganic form through a process called mineralization.
( Lindsey Benne )

You want to make your soil as healthy as possible—and keep it that way—to increase yield with less fertilizer expense.

As you add soil health to your management goals, it might help to think of soil as a production system—a busy factory. The workers are living creatures—larger ones such as nightcrawlers and earthworms and, of particular importance, microbes.

“The healthier your soil, the higher the population of microbes and the bigger the production system,” Ferrie says. As a farmer, your job is to manage an industrious herd of critters that dwell in your soil.

“Although microbial activity affects all nutrients, it is especially important with nitrogen (N), phosphorus (P) and sulfur (S).” Ferrie continues. “That’s because a high percentage of those nutrients is tied up in the organic form. Organic nitrogen, phosphorus and sulfur is unavailable to plants. Microbes make nutrients available to plants by converting them to the inorganic form through mineralization.”

In the organic form, nutrients are part of a carbon chain, and carbon is food for soil microbes. Carbon is found in crop residue and in the bodies of live and dead microbes. The process we view as decomposition occurs as microbes use this carbon.

“As they cycle carbon, microbes also cycle nutrients,” Ferrie says. “The healthier your soil, the more critters are working for you.”

Understanding soil microbes reveals why proper pH and good aggregate stability, or soil structure, are essential to healthy soil. To a crop producer, the most important microbes are detritivores, organisms that eat dead tissue and make up 85% of the population. Their food source is carbon.

The most important detritivores are fungi, bacteria and actinomycetes. “Fungi are involved in all stages of decay or decomposition,” Ferrie says. “They aid in nutrient uptake around roots. They can handle somewhat acidic conditions. They can’t handle hot and dry conditions, so water management is essential to maintain their population.”

Bacteria are single-cell organisms. “Some scientists believe a gram of soil contains 20,000 species of bacteria,” Ferrie says. “They are very important to nutrient cycling, especially with nitrogen. They do the easy early work of decomposition, breaking down the finer tissues of plants. This is the group responsible for most of the carbon penalty, which creates problems with nitrogen, phosphorus and sulfur availability in the spring when plants are small. The population is resilient during dry conditions, but sensitive to soil pH. Their ideal pH range is 6.3 to 7.0.”

Actinomycetes do the hard work of decomposition, breaking down residual compounds and cellulose—the stalks, crowns and root balls of corn. They favor warmer soil, so they show up later in the season. “Actinomycetes are sensitive to pH, preferring 6.0 to 7.5. That’s why we see cornstalks and root balls remain undecomposed for multiple years in fields with acid soil.”

Most fungi, bacteria and actinomycetes are aerobic heterotropes. That means they obtain carbon by breaking down organic material and need oxygen to live. Some are aerobic autotropes that get carbon from carbon dioxide or carbonates in the soil.

Efficient cycling of N, P and S requires a healthy population of microbes. “We often think we apply nutrients to supply the growing crop,” Ferrie says. “But, in reality, we are feeding the soil microbes. The healthier our ‘herd’ of microbes, the more nutrients they supply to the crop.

“The entire cycling process depends on soil microbes decomposing the cover crop residue (as well as the old cash crop residue), then releasing the nitrogen from the soil.”

In everything from humans to corn plants, P is essential for energy. “The phosphorus cycle is controlled by microbes, as they consume phosphorus then mineralize or release it for other organisms,” Ferrie says. “Anything that affects soil microbes affects phosphorus mineralization and availability—temperature, moisture, oxygen, soil pH, nutrient balance and the carbon supply.”

It’s easy to see the impact of soil microbes on P availability when corn emerges in cold soil. The plants turn purple, a symptom of P deficiency as the cold soil temperature shuts down microbial activity. They green up again as the soil warms and microbes resume their activity.

Similar to N and P, S is contained in crop residue, organic matter and dead organisms in the soil. It must be mineralized into the available form, sulfate, before plants can use it. “The microbes that do the work are autotropic bacteria,” Ferrie says.

Because the microorganisms that mineralize S are aerobic, or air-breathing, they require oxygen. Once S is mineralized into sulfate, if soil conditions become anaerobic—as when it’s saturated with water—the sulfate (like N) can be lost through volatilization. “Managing the soil’s oxygen supply, which includes water, is the key to obtaining more usable sulfur,” Ferrie summarizes. “One of the hallmarks of healthy soil is macropores that contain 60% water and 40% air.”

Soil microorganisms are part of the biological component of soil health. The other two components are chemical and physical, and each one impacts the others.

“On the chemical side, it’s most important to maintain optimum soil pH,” Ferrie says. “Nutrient levels will be higher with proper pH than they will be in acidic or alkaline soil. Unfortunately, lime applications are the first thing farmers tend to cut back on when times are tight.

“In addition, we need enough nitrogen, phosphorus and sulfur in the soil to support healthy populations of microbes. If the soil can’t supply enough, we have to apply more, until we reach the proper balance.

“On the physical side,” Ferrie continues, “our goal is to have as many macropores as possible; macropores are where root systems operate and microbes live. They also make it possible for water to move upward and downward through the soil. Water infiltration rate and aggregate stability (which creates macropores) are keys to the microbial environment.”

The steps you can take to improve microbial habitat include:

“Think about the consequences of everything you do in terms of its effect on soil microbial populations,” Ferrie concludes. “The bigger the microbial system, the more nutrients the soil can hold and release for your crops.”

Building on the Systems Approach, the Soil Health series will detail the chemical, physical and biological components of soil and how to give your crop a fighting chance.
http://www.FarmJournal.com/soil_health