Brazilian Soybean Farmers May Get Stuck With Losses 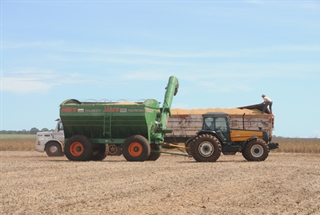 When Claudio Scariote agreed in May to add 200 hectares (494 acres) to his soybean farm in Brazil, leasing more land made sense. Now that planting has begun, prices have plunged and the crop is looking like a money loser.

“I wouldn’t have done this deal today,” he said by telephone from Sapezal in Mato Grosso state, the biggest growing region. “We have no alternative” to increasing output as planned, said Scariote, who spent 4 million reais ($1.6 million) on four new tractors and three combine harvesters since 2013 to upgrade his 3,400 hectares, along with more seed and fertilizer.

With the harvest accelerating across the U.S., the world’s top producer, the season is just beginning in the Southern Hemisphere. Farmers in Brazil, the largest exporter, are set to boost output to a record for a third straight year, compounding the biggest global surplus ever. Soybean prices have tumbled into a bear market in the past five months, touching a four-year low, leaving some growers unable to find buyers.

It now costs about 46 reais to produce a 60-kilogram (132- pound) bag of soybeans, or $8.55 a bushel, in Mato Grosso, which accounts for 30 percent of Brazilian output, according to data from the Mato Grosso Institute of Agricultural Economics. Buyers are offering 39 reais a bag for delivery in March, after the harvest. Because most farmers bought seed and fertilizer when prices were higher, planting in the state probably will still rise by 4.3 percent to a record, the institute said.

Brazil’s production may jump 7.3 percent to 92.4 million metric tons in the current season, topping the 86.1 million harvested a year earlier, government forecaster Conab said on Oct. 9. Output has almost quadrupled in the past two decades. Farmers converted rain forests and tropical savannas into soybean fields as surging demand in China, the largest importer, helped send global prices to records as recently as 2012.

While prices remain almost twice what they were a decade ago, output is overwhelming demand. U.S. production will surge 17 percent to 106.87 million tons, leaving global inventories before next year’s harvest at 90.67 million tons, up 36 percent from a year earlier, the U.S. Department of Agriculture said Oct. 10. The surplus will equal 31.9 percent of global demand, up from 24.5 percent a year earlier and the most ever, the USDA said. Harvests are up 30 percent in the past three years, while demand rose 10 percent.

“The Brazilian farmer has yet to wake up to the new reality of big global supplies,” Pedro Dejneka, managing partner in Chicago for Agr Brasil, a unit of AgResource Co. “They are still suffering from a China-demand fever. It’s not in the cards that global demand will be strong enough to offset the increase in world production.”

Soybean futures have plummeted 22 percent on the Chicago Board of Trade since the USDA said June 30 that domestic planting would jump 11 percent to a record. The oilseed traded at $9.63a bushel today, leading a slump since June 27 in the Bloomberg Commodity Index of 22 raw materials, which slid more than 13 percent during that period.

High prices over the past decade have paid off in Mato Grosso, a state in Brazil’s western interior that is more than twice the size of Germany and relies on more than 1,000 miles of precarious roadways to deliver truckloads of soybeans to southeast export terminals on the Atlantic coast. Transportation adds 13 reais to 14 reais to the cost of each bag, the Mato Grosso Institute of Agricultural Economics said.

The state has doubled the area under cultivation since 2002 to about 9 million hectares, and Conab estimates output this season will be 27.5 million to 28.3 million tons. That’s twice what farmers will grow in China, where imports will jump for an 11th straight year to 74 million tons, the USDA said.

With the U.S. crop only 40 percent harvested, and most of Brazil’s not completely planted until next month, it’s possible that output may not reach government forecasts. A drought in Brazil’s coffee-growing regions this year sent arabica-bean prices up 96 percent. In 2012, a lack of rain caused damage to crop in the U.S. Midwest, sending soybeans to a record $17.89.

This year’s price slump also may discourage production next year. Growers in Mato Grosso plan to cut back on planting in 2015, which would be the first decline since 2006, said Anderson Galvao, head of crop researcher Celeres in Uberlandia. “It’s like braking a locomotive,” Galvao said. “It takes some time until it stops completely.”

Farm spending already is dropping, said Marcos Rubin, an analyst at Agroconsult in Florianopolis. Expenditures on new machinery and land that averaged 8.4 billion reais over the past three years will fall to 3.8 billion reais this season and 1.5 billion a year later, he said. “We see a big downturn of investment,” Rubin said. “We’ll be probably start seeing a reduction in the planted area in 2015.”

While some growers in Mato Grosso would lose money at current prices, areas closer to export terminals with lower shipping costs have an incentive to keep producing. The crop is “still profitable in most of the country,” Agriculture Policy Secretary Seneri Paludo told reporters in Brasilia on Oct. 9.

MetLife Inc., the largest U.S. life insurer, with an investment portfolio of $505 billion, is expanding in Brazilian agriculture. On Oct. 15, the New York-based company announced a $150 million mortgage loan to soybean producer Amaggi Group, boosting MetLife’s portfolio in the country to $700 million.

For now, speculators are betting prices will keep falling. Money managers have held bearish position in soybean futures and options for 13 straight weeks, since mid-July, U.S. Commodity Futures Trading Commission data show. As of Oct. 7, holdings were net-short 24,457 contracts, the most in three weeks.

Farmers in Mato Grosso who normally arrange sales before the harvest have reached deals on 11 percent of their expected crop, down from 50 percent a year ago, said Ricardo Tomczyk, who heads the state’s soybean-farmers lobby, Aprosoja. “Farmers have taken all the risk this year,” he said by telephone from Rondonopolis.

Prices could drop even lower if growers try to sell all their crops before the harvest, Conab, the government forecaster, said in last week’s report. “Buyers are not in the slightest hurry to buy,” Celeres’ Galvao said. “They can pay even less in three or four months.”

Soybean farmer Sergio Stefanelo said he hasn’t sold a single bag of the crop he will harvest in early 2015, compared with about half his output at this time last year.

“At current prices, you make no profit,” Stefanelo said by telephone from Campo Novo do Parecis, adding that he’ll wait for prices to recover before he tries to sell.

“We’re moving from a scenario where everybody needed to rapidly move the soybeans from Brazil to one in which you have ample stocks everywhere,” Paulo Sousa, director of grain and soy crushing in Brazil for Minneapolis-based Cargill Inc., said during an interview in Sao Paulo in August. “The Brazilian market has changed.”