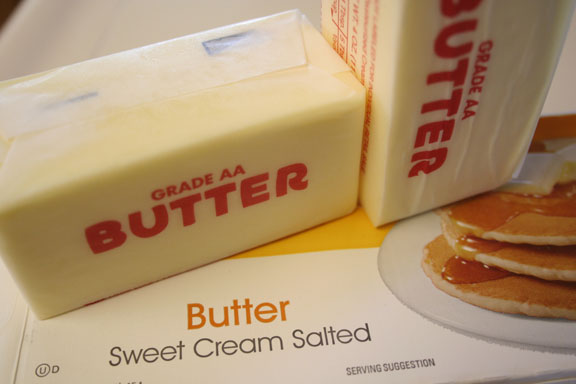 A 'tsunami of butterfat' is coming to the U.S. right now,” says one dairy broker.

Oct. 17 (Bloomberg) -- Butter prices plunged the most in 18 years as increasing shipments to the U.S. ease tight supplies that pushed costs to a record last month.

Imports in August more than doubled from a year earlier, the second straight monthly increase, the latest data from the U.S. Department of Agriculture show. Supplies are rebounding as New Zealand, the world’s biggest butter exporter, enters its highest milk-production period.

Prices surged 89 percent this year through September after demand for U.S. exports jumped amid anemic growth in milk production, spurring tighter domestic supplies that contributed to higher costs for buyers including Panera Bread Co. Gains for global milk output will help ease the shortage. As dairy production ramps up in New Zealand, shipments to the U.S. will increase just as retailers are finishing up holiday purchases, according to Chicago-based HighGround Dairy’s Eric Meyer.

“There’s what has been referred to as a tsunami of butterfat coming to the U.S. right now,” Dave Kurzawski, a Chicago-based senior broker at INTL FCStone Inc.’s dairy division, said in a telephone interview. “The expectation for a substantial increase in butter imports is weighing heavily on the market.”

Cash-butter for immediate delivery slumped 6.1 percent to $2 a pound on the Chicago Mercantile Exchange today, the lowest since May 1. Prices plunged 29 percent this week, the most since November 1996, and are down from an all-time high of $3.06 reached on Sept. 19.

Butter consumption in 2014 is expected to be the second- highest ever, according to the USDA, partly as some consumers shift away from margarine. The gains have eroded inventories. While stockpiles in August climbed from the start of the year, they were still lower 37 percent smaller than in 2013.

Demand for U.S. supplies has slowed. After exports in the first six months of the year were up 42 percent from 2013, shipments declined for two straight months, falling 35 percent in August from June, USDA data show.

U.S. prices are higher than those from other producing nations, signaling American shipments will continue to slow. Butter costs $1.19 a pound at GlobalDairyTrade, the international dairy auction owned by New Zealand’s Fonterra Cooperative Group Ltd. On the CME, November futures traded near $1.92 a pound today.

World costs for dairy products have tumbled 29 percent this year, according to the United Nations Food and Agriculture World Dairy Price Index.

New Zealand produces the most milk in October, or about 15 percent of annual output, according to the Dairy Companies Association of New Zealand. Those supplies will translate to higher butter shipments to the U.S. in the next six to eight weeks, HighGround Dairy’s Meyer said.

“With talk of imports and plenty of milk out there, there’s a really good chance they’ll churn that milk into butter,” Kurzawski, of INTL FCStone said. “We’ll see some nice strides in the growth of inventories in the first quarter of next year.”