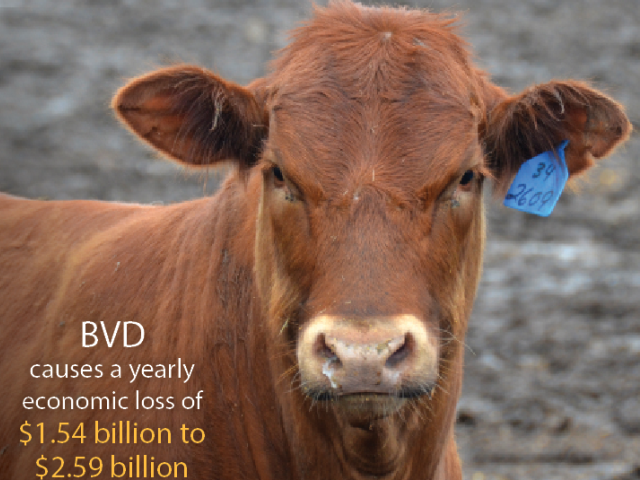 One of the beef industry’s biggest quandaries has been ridding cattle herds of bovine viral diarrhea (BVD). The virus was first discovered in 1946 and has been found on every continent except Antarctica. Like many infections, different strains of BVD have mutated and evolved across the world.

BVD causes decreased reproduction, lower feed efficiency, higher mortality and morbidity rates. Exposure to persistently infected (PI) cattle is costly. A feedlot study from 2009 reveals contact with a PI-calf results in losses of $41.84 to $93.52 per animal.

Because of BVD’s global and fiscal impact, a forum was hosted by the National Institute for Animal Agriculture and the National Cattlemen’s Beef Association to address issues and seek solutions for the disease. Cattle producers, veterinarians, university researchers, government officials and industry professionals all took part in the conversation.

To control BVD, Grooms says there are three important steps in the prevention chain:

Grooms says none of these approaches will work simply on their own, but when used together they will go a long way toward protecting the beef supply chain. The ultimate goal is to eliminate BVD losses all together.

In many cattle circles, the Southeast region gets a bad reputation in regards to health and preconditioning. Commercial cow-calf producer Brian Bolt from Anderson, S.C., prides himself in changing that stigma placed on Southeast calves through a set vaccination and health program.

Besides running a cow-calf herd, Bolt also develops embryo transfer recipients and serves as manager of business development for AgriClear. When he started the recipient business, Bolt began BVD PI-testing.

“Not finding any (PI-cattle) I feel like we’re offering our customers some advanced assurance we’re doing our job,” Bolt says.

At times Bolt felt disappointed not to find a PI-animal in his herd because it would give him a “smoking gun” to pinpoint any production downfalls. He advises cow-calf producers not to get frustrated about testing and not take it personally if a PI-calf were to show up in their herd.

The market should incentivize doing the right thing, Bolt says. Maybe it is a two-sided coin and the industry needs to penalize doing the wrong thing.

In the Southeast, Bolt says, it becomes difficult for producers because they aren’t selling truck loads. Southeast cattlemen are dealing in smaller lots so it is hard to witness the financial benefit from vaccinating and PI-testing.

“You have to appreciate our complete lack of infrastructure in some areas,” Blot says. Cattle feeding and packing facilities are almost non-existent in the Southeast. That puts a lot of road miles between those calves and their next destination.

“I think BVD may be a people problem,” Bolt says. Maybe the culture around how producers handle and address BVD in their herds needs to be changed.

A Background in BVD

As a backgrounder, Brian Keith receives calves that come from the Southeast that many consider to be high-risk. Keith backgrounds 15,000 cattle per year and has more than 28 years of experience working with high-risk calves.

Keith Cattle Co. receives many put-together load lots purchased through order buyers and delivered to the ranch in Allen, Kan.

“They may come from 50 to 60 different farms and ranches, with different management programs, different vaccination programs or maybe none at all,” Keith says. His goal is to get those cattle on the same plane of health and nutrition before moving on to the next step.

“BVD has been a big, big problem over the years,” Keith adds. For more than 10 years Keith Cattle Co. has BVD PI-tested every calf that comes through the ranch.

Newly arrived calves are given a day on hay and water before entering the chute for the start of the health program. An ear-notch sample is taken from each calf and sent to a lab 30 miles away in Emporia, Kan. By the following morning Keith will know if a PI-positive calf has entered his starter yard. 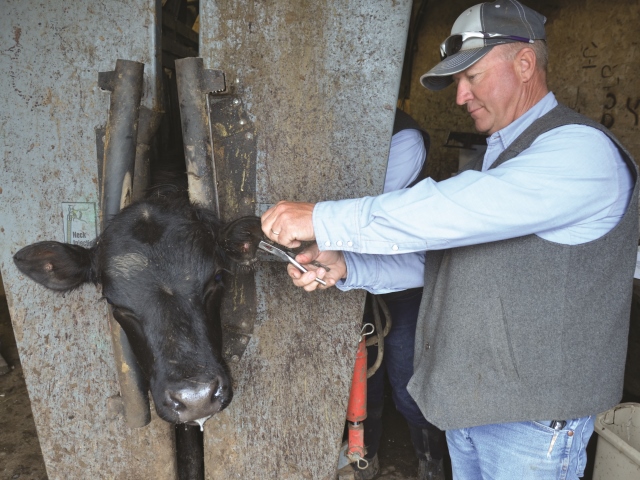 All PI-positive calves are sent to a quarantine pen. “They stay there until they die or we harvest them. Keeping those cattle isolated is just paramount,” Keith says.

Two times Keith had a customer who preferred to sell the PI-calf. In those cases the calf was identified with two ear tags marked “PI” and had a big “PI” written in chalk before it entered the local livestock market.

In addition to running a backgrounding operation, Keith is a partner on 300 head of commercial cows. All cows and their calves are tested. New bulls are tested, too.

To prevent any exposure to PI-cattle, Keith built an additional handling facility for his cow-calf herd. He limits nose-to-nose contact by keeping the cows’ pastures isolated from the backgrounding facility.

Calculating the costs of BVD to the cattle industry is a difficult chore because it touches so many areas. Taking the task to determine how financially burdensome BVD can be, Derrell Peel, Extension livestock marketing specialist at Oklahoma State University, looked at all facets of the cattle industry from cow-calf, stockers, feedlots and even dairies.

“BVD impacts all sectors of the industry in different ways,” Peel says.

“A lot of the loss is probably not even recognized by producers,” he adds.

Peel looked at an array of economic studies that have been performed over the years analyzing the costs associated with BVD on individual sectors and found:

Peel estimates the total loss to the industry is $1.54 to $2.59 billion. However, he cautions estimates varied widely in the studies because of different population sets, various methodologies as well as economic assumptions.

“I think these numbers probably capture the impacts in a general sense across the industry,” Peel relates. “The important part is it’s a big number.”

Since 1986, the U.S. calf crop has dropped almost 4%. Peel says the loss can’t all be attributed to BVD, but symptoms related to the disease such as early embryonic death and declining reproduction should be worrisome to cattlemen.

“The question becomes if you could take out those BVD impacts, how much would this change? I don’t know that we know the answer,” Peel says.

Another area of angst for Peel was looking at the stocker-backgrounder segment. Feedlots tend to keep good data on death loss and health. In stockers there just hasn’t been the same amount of research and data accumulated. Peel estimates there are going to be more PI-calves at the stocker-backgrounder phase compared to feedlots. Some of those cattle won’t even make it onto the next level.

“Part of the challenge of attributing impacts specifically to BVD is the fact it is so closely linked to other diseases, such as BRD [bovine respiratory disease],” Peel says.

Feedlots have experienced higher instances of death loss during the past 20 to 30 years. According to Kansas State Universities’ Focus on Feedlots survey statistics, death loss has risen 0.52% in the past 22 years.

Peel says the beef industry needs to figure out why these death loss numbers and decreased reproduction are occurring—it’s not likely BDV is to blame for it all. 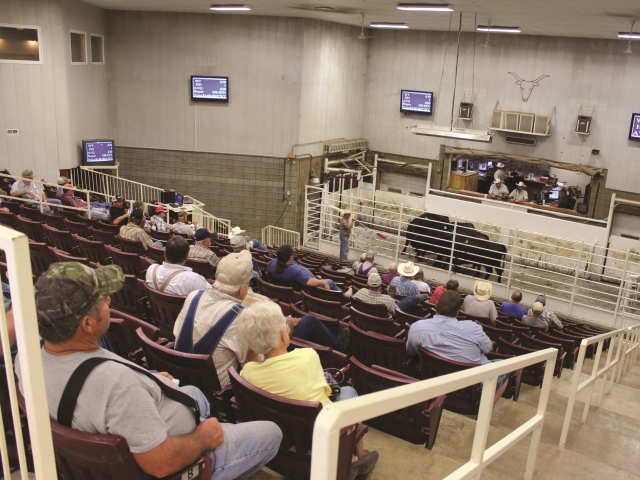 The Rules of Selling PI-Cattle

When a PI-calf has been identified, the owner has to decide what to do with it. One option is sending it through traditional marketing channels like an auction barn. However, livestock markets need to be aware of PI-animals before entering a sale ring, says Lindsay Graber, director of marketing and communications at the Livestock Marketing Association (LMA), Kansas City, MO.

“Market owner-operators are committed to the transparency of the health status in relation to PI-positive calves for sale at their markets when that information is given to them on those animals upon arrival,” Graber says.

Once those PI-positive cattle arrive at a facility, they will be quarantined to eliminate nose-to-nose contact with other cattle at the sale barn.

When a PI-animal enters the sale ring, an announcement is typically made to the crowd. Other auction facilities might mark the animal with chalk or ear tags.

“One of the bigger issues from BVD (PI) animals moving through a market is permanent identification,” Graber says.

There is the potential for a PI-animal identified with chalk and ear tags to re-enter a sale ring with no one knowing it carried BVD. It could be sold direct to another producer and no one would be the wiser.

Graber says there have been “proactive approaches” in some states for permanent identification of PI-cattle. In Oklahoma the local LMA organization has been working to establish a “PI” brand in the state.

Note: This story appeared in the May issue of Drovers