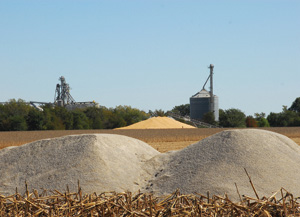 This little-understood nutrient holds the key to soil health, which lays the foundation for high yield

It’s common knowledge that limestone applications are necessary to prevent soil from becoming acid. But how does that process work? If you understand it, your lime applications will become more effective.

The liming process revolves around calcium, as Farm Journal Field Agronomist Ken Ferrie has explained at several sessions of Farm Journal Corn College. Calcium, like sulfur, is considered a secondary nutrient—falling between the primary nutrients (nitrogen, phosphorus and potassium) and the micronutrients.

Calcium is vital in plants as well as in the soil. In plants, it helps regulate osmotic pressure, which affects drought tolerance, and blocks the accumulation of toxic amounts of manganese in plants. That is why symptoms of calcium deficiency are essentially the same as those of manganese toxicity.

"Calcium deficiency in plants is rare," Ferrie says. "It’s calcium’s role in the soil, in regulating acidity, or pH, that farmers need to be concerned with."

In the soil, calcium holds the key to healthy structure, Ferrie continues. That’s because a calcium ion has two valence electrons, or positive charges. Such an ion is called a cation (pronounced "cat-ion").

Secretions from the roots of grass plants (corn, wheat and rye, but not soybeans, tobacco or cotton), help glue the floccu-lated clay particles together, capturing sand and silt particles in the process. This forms soil aggregates, creating a healthy, crumblike soil structure.

"Large pore spaces, called macropores, around the soil aggregates serve to house the ‘soil solution,’" Ferrie says. "This is where nutrient exchange takes place between microorganisms in the soil and where root growth occurs."

In other words, without calcium, soil won’t have those essential macropores. But the bridges between clay particles can be broken, by heavy implements, tillage or by displacement of the calcium ions.

"Calcium ions can be displaced by single-valent salts such as sodium," Ferrie says. "Displacement can be caused by high salt loads in irrigation water on poorly drained soils. In the Middle East, areas that once were productive deltas under irrigation are now deserts because of poor drainage and salt buildup. Displacement can also result from overapplying manure, which can be high in salt.

"We fix this problem by installing drainage or applying a product such as gypsum [calcium sulfate]. The sulfate marries up with the salt, rainwater flushes it out and calcium rebuilds the soil bridges."

Creating acidity. A more common problem occurs when we replace calcium ions with hydrogen ions. "Hydrogen is a waste product of plant growth and soil microbes," Ferrie says. "It also comes from most nitrogen fertilizers, and from acid rain."

Excess hydrogen ions create soil acidity, which we measure as pH—0 to 6 being acidic, 7 being neutral and 8 to 14 being alkaline.

In low-pH, acidic soil, the microbes are less active. That leads to poor nutrient uptake by plants, causing some nutrients (mainly manganese, but, in soybeans, iron and aluminum as well) to reach toxic levels and reducing herbicide performance.

"Destruction of soil structure is the effect that is hardest to come back from," Ferrie cautions.
To raise the pH fairly quickly, apply limestone—calcium or magnesium carbonate. The carbonate flushes out the excess hydrogen ions and starts to flocculate the soil.

"Once growers identify the amount of calcium carbonate, they need to look at the sources available in their area, take into account the quality of product and adjust their rate accordingly," Ferrie explains. "Remember, you are treating the soil, not feeding the crop. The limestone must be spread like paint for uniform soil coverage."

If soil has remained acidic for a long time, rebuilding structure can take years. "That’s something to think about when buying land—if a field’s pH is down in the 5 range, how long has it been that way?" Ferrie adds.

Fixing acidity. The first step in fixing acid soil is to test the soil. "Every two years is ideal," Ferrie says. "Making frequent, small applications of lime keeps pH in the optimum range. Infrequent, large applications cause the soil to fluctuate between high pH [following the application], optimum pH and low pH."

The second step is to understand your soil test report. You need to know whether the results are reporting water pH or buffer pH. 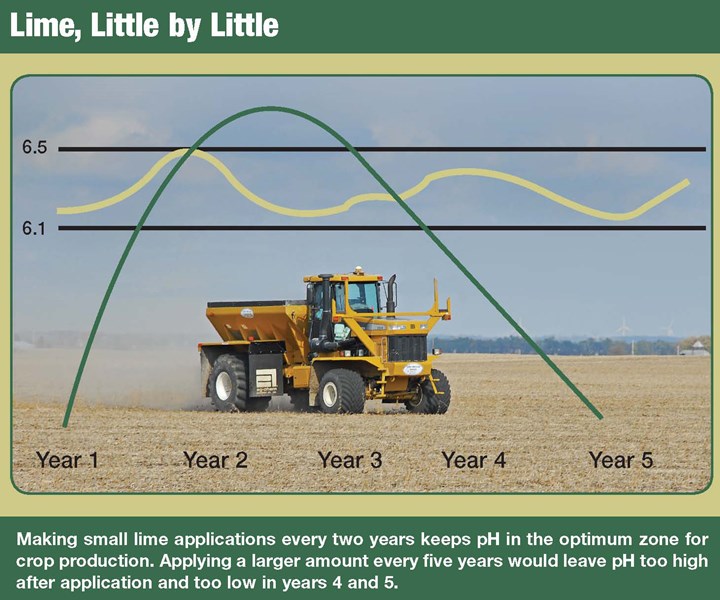 You can use water pH to calculate liming rates if you relate the pH reading to the soil texture—sand, silt loam, loam, etc.—because texture reflects the cation exchange capacity. Land-grant universities provide charts that can help you perform this calculation.

If you use only water pH, consider testing your soil by soil type or with a smart grid rather than a simple grid, Ferrie advises. The smart-grid system shifts grids around to position them over soil types.

"Simple grids don’t align with soil types," Ferrie says. "In one typical Livingston County, Ill., field containing soils ranging from heavy clays to light loams, we found that out of 64 grids of 2½ acres each, only three encompassed an area of uniform soil type. The rest were blends of different soils."

Two-year testing pays. Ferrie recommends testing soil every two years. "The more acidic soil gets, the slower the microbial population runs and the greater the risk of tearing the structure apart," he says.

"It’s very difficult to keep most soils in the sweet spot for crop production when liming on a five- to six-year rotation," he adds.

"We need to start looking at limestone in a different way, and be proactive rather than reactive. That means applying smaller amounts, more frequently," Ferrie says.

The following tips will help calcium do its vital job in the soil: 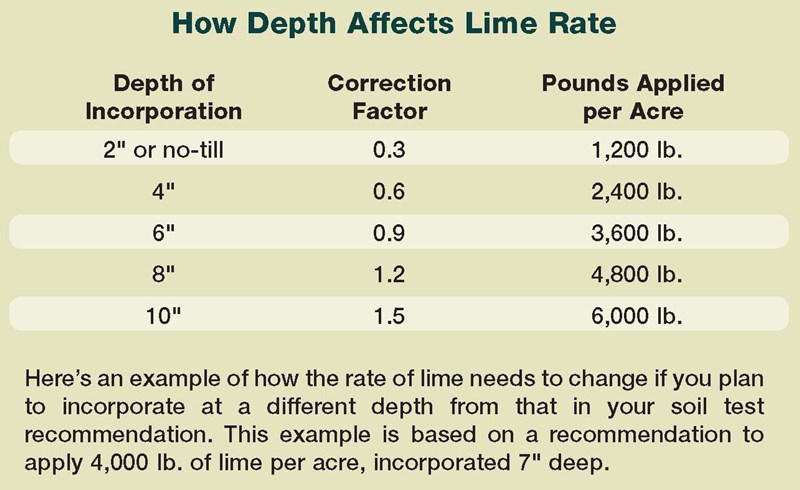 No-till tricks. No-till makes efficient lime application more challenging—but it can be managed. "I know farmers who have no-tilled for 20 years and have never had to till their soil to incorporate lime to fix acidity problems," Ferrie explains.

"If you apply the two together, the calcium will attract the phosphorus and tie it up," Ferrie says. "The carbonate will attract the ammonia nitrogen, causing it to be lost through volatilization."
Separating the two applications by a year works best. If you can’t do that, apply the DAP and then wait for a rain. "When you get enough hydrolysis that you can no longer find the fertilizer pellets, it’s safe to apply the limestone," Ferrie says.

Read more from the Navigator series.

Tags:
Corn
Could China’s Massive Rainstorms Be A “Black Swan” for Markets?
Analyst Digs Through Data to Find Historical August Lows
RFD-TV Interview: Grains & Livestock (8.6.20)
AgDay Weather: “Break” From Heat May Be Short-Lived
4 Options for a Farm Operation Without a Successor