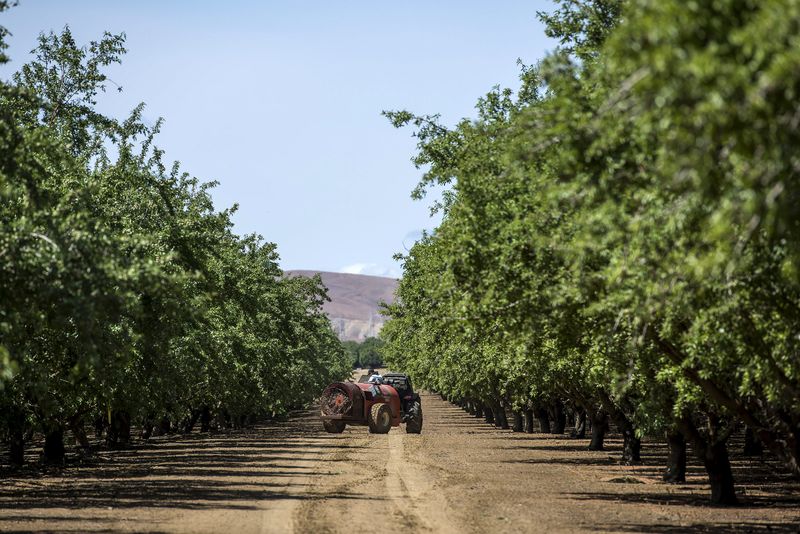 California is tightening the strictest rules in the nation on a pesticide that is popular with farmers over new health concerns, officials said Friday.

Farmers use chlorpyrifos to kill pests that attack a wide variety of crops like grapes, almonds and cotton grown in California, the nation's agricultural leader, as well as across the country.

State officials are taking steps to put it on a list of chemicals known to be harmful to humans and to also increase the distance from schools and homes in which farmers can apply.

The moves run contrary to a decision by Scott Pruitt, the administrator of the U.S. Environmental Protection Agency, to end his agency's effort to ban the pesticide sold by Dow Chemical after federal scientists concluded it can interfere with the brain development of fetuses and infants.

Pruitt told Congress in June his decision was based on "meaningful data and meaningful science." Pruitt's staff has thus far declined to provide details of what information Pruitt reviewed before making his decision.

California officials say that researchers are learning more about how the pesticide harms the developing brains of unborn babies and young children. Farmers apply it to 60 different crops, and it is most heavily used in San Joaquin Valley farming communities.

"New information in the scientific community leads us to believe the level of risk it poses is greater than previously known," California EPA Secretary Matthew Rodriquez said in a statement. "The actions we are taking today reflect our commitment to the health and safety of all Californians, and the environment."

California already prohibits farmers from applying the pesticide within 150 feet (45 meters) of a school or home, but officials say that could be increased to 450 feet (135 meters).

A draft of the new rules was released Friday, and after a public comment period officials could begin to enforce them in September - with more regulations expected in late 2018. Methods of applying the pesticide from helicopters and airplanes may also be restricted.

Bob Blakely, vice president of California Citrus Mutual, said the use of chlorpyrifos is declining, but it remains an important resource for farmers. It is the only way to kill some pests, like ants, and is safe when used properly, he said.

"It's a tool we need to have in the tool box and the ability to use it in the unique situation where it fits," said Blakely, adding that he is still reviewing the new rules.

Environmental and farmworker advocates, however, say the rules don't go far enough. They called for an outright ban.

"California officials have chosen to ignore the mountain of evidence and delay critical actions to protect California communities," he said. Officials are "failing to protect our most vulnerable populations, particularly pregnant women and children."

Tags:
California
Science Experiments
Some Areas Too Wet, Others Too Dry
The Role of Veterinarians and Nutritionists as Consultants for Dairies
Are All Bets Off for Phase One Trade Deal with China?
Jerry Gulke: Letting Time Pass May Pay Dividends