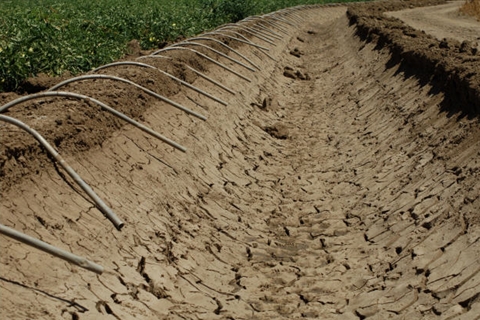 Farms and other Californians that have been shielded from water reductions because of century-old claims could face new restrictions, the State Water Resources Control Board said Friday.

It's another sign of the rising severity of California's drought, now in its fourth consecutive year. Surveyors on Wednesday found the Sierra Nevada snowpack containing just 5 percent of its normal water level, which makes its way into rivers and streams and provides 30 percent of the state's water.

Thousands in California, mostly farmers but also cities and energy companies, have rights to divert water for their needs, including irrigation and for hydroelectric dams. But if dry conditions continue through summer, they will likely face restrictions on taking water, the board warned in a letter.

The board's move could place restrictions on those with claims to water before 1914 for the first time in the current drought. The so-called senior rights holder are prioritized and protected from cuts under California's antiquated water rights system.

"As we deal with an unprecedented drought, both urban and rural water users should anticipate we will continue to take unprecedented actions," said Felicia Marcus, the board's chairwoman, in a news release.

Nearly everyone with a claim to water after 1914 will face curtailments in especially dry areas of California, the letter warned. Those who do not comply face fines of up to $10,000 a day under emergency drought legislation signed last year, board spokesman George Kostyrko said.

Jay Lund, director of the Center for Watershed Sciences at University of California, Davis, said water rights holders in the Sacramento and San Joaquin river watersheds are most likely to face curtailments.

"It's pretty much what everybody expected to happen," Lund said.

More than 5,000 water rights were curtailed last year, which the board says helped contribute to fallowed fields and job loss at farms. The California Farm Bureau Federation could not immediately be reached for comment.

The board's warning comes days after Gov. Jerry Brown ordered sweeping measures to curtail urban water use. He is calling on residents and businesses statewide to reduce water use by 25 percent compared to 2013 levels, but didn't call for agriculture from his order for mandatory reductions.

Advocates for agriculture note that many farmers are suffering from lost access to water from state and federal reservoir water systems. However, those with senior water rights before the creation of government water delivery systems have still been able to tap water supplies.