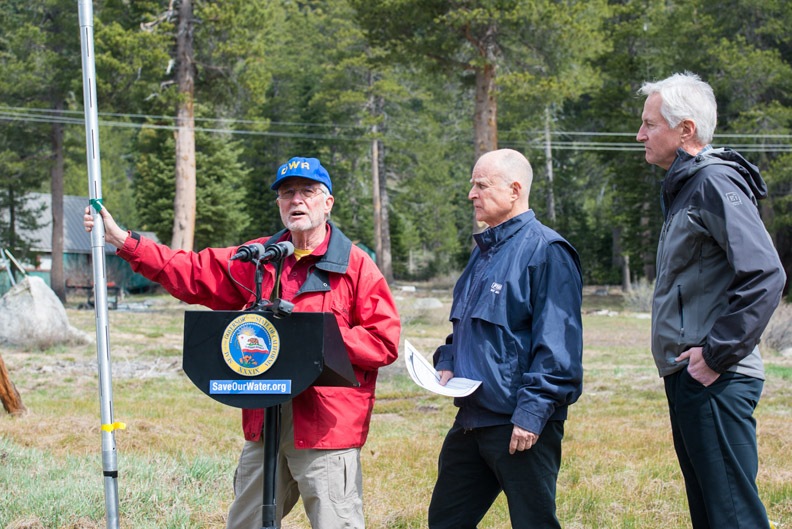 Snow survey shows water content is only 5% of historic average, underscores the severity of California’s drought.

SACRAMENTO – The California Department of Water Resources (DWR) found no snow whatsoever today during its manual survey for the media at 6,800 feet in the Sierra Nevada. This was the first time in 75 years of early-April measurements at the Phillips snow course that no snow was found there.

Attending the survey with Governor Brown was DWR Director Mark Cowin, who said Californians can expect to receive almost no water from the meager snowpack as it melts in the coming weeks.

“Today’s survey underscores the severity of California’s drought,” he said. “Water conservation must become a way of life during the worst drought in most Californians’ lifetimes.”

Today’s readings are historically significant, since the snowpack traditionally is at its peak by early April before it begins to melt. Electronic readings today found that the statewide snowpack holds only 1.4 inches of water content, just 5 percent of the historical average of 28.3 inches for April 1. The previous low for the date was 25 percent in 2014 and 1977.

The Phillips snow course, which has been surveyed since 1941, has averaged 66.5 inches in early-April measurements there. Four years ago today, the measured depth at Phillips was 124.4 inches. The deepest April 1st Phillips measurement was 150.7 inches in 1983, and the lowest previously was 1.04 inches in 1988. Photos of previous surveys at Phillips can be found here. Images from today’s survey will be posted at that link as soon as possible.

Today’s manual survey was the fourth of the season conducted for the news media at the Phillips snow course just off Highway 50 near Sierra at Tahoe Road 90 miles east of Sacramento. When DWR conducted the first three manual surveys on December 30, January 29 and March 3, the statewide water content in the snowpack was 50 percent, 25 percent and 19 percent respectively of the historical averages for those dates. The decline reflects California’s significantly lower precipitation and the warming trend that made this winter the warmest in the state’s recorded history. What precipitation there was fell mostly as rain due to warmer temperatures.

Little precipitation has fallen in Northern California since early February. The eight weather stations there that have been monitored for generations have recorded 31.7 inches since the beginning of Water Year 2015 on October 1. That is 76 percent of the historical average for April 1. Further south, the five-station San Joaquin index has recorded 13.7 inches, 41 percent of normal for today’s date, and the six-station index in the Tulare Basin is similarly far below normal – 10.3 inches, or 42 percent of the April 1 average there.

California’s historically wettest winter months have already passed, and the drought is now firmly rooted in its fourth consecutive year.

Governor Brown declared a drought State of Emergency on January 17, 2014 and directed state officials to take all necessary actions to prepare for water shortages. He called on all Californians to voluntarily reduce their water usage by 20 percent.

The Water Resources Control Board on March 17 announced new restrictions on water use, including limiting outdoor watering to two days per week and prohibiting lawn watering during rainfall and during the next two days. The new rules also prohibit restaurants from offering water unless customers ask, and hotels must offer guests the opportunity to decline freshly laundered towels and sheets.

Conservation – the wise, sparing use of water – remains California’s most reliable drought management tool. Each individual act of conservation, such as letting the lawn go brown or replacing a washer in a faucet to stop a leak, makes a difference over time.

Electronic snowpack readings are available on the Internet at:

Everyday water conservation tips may be found by clicking on Save Our Water at: