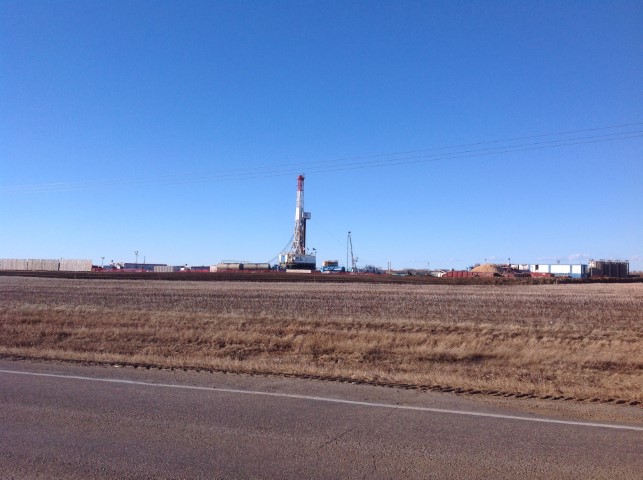 Canadian Prime Minister Justin Trudeau plans to approve at least one new oil pipeline project in his first term, with Kinder Morgan Inc.’s Trans Mountain expansion to the Pacific Coast the most likely candidate, people familiar with his plans said.

The prime minister is seeking to strengthen environmental standards and build confidence in new regulatory rules while also stoking growth in Canada’s sluggish economy by backing a pipeline. Trudeau therefore plans to neither approve all the projects under consideration nor reject them all, according to the people who spoke on condition of anonymity because the discussions are private.

Trudeau faces a series of high-profile energy decisions over the next three months, including a final cabinet ruling on Kinder Morgan’s Trans Mountain proposal and a legal appeal related to Enbridge Inc.’s Northern Gateway pipeline. Trudeau will also decide on Petroliam Nasional Bhd.’s Pacific NorthWest natural gas project, while TransCanada Corp.’s Energy East pipeline is due for a decision in about two years.

Kinder’s proposal is seen as likeliest to win approval despite opposition among key figures in vote-rich Vancouver, the people said. The Trans Mountain expansion already has conditional regulatory sign-off from the National Energy Board.

Red tape and environmental opposition bogged down major Canadian energy proposals during the nine-year reign of the previous Conservative administration led by Stephen Harper. Northern Gateway, Trans Mountain and Energy East have all been delayed in Canada, while the Keystone XL pipeline to the Gulf Coast was rejected by the U.S. government.

Trudeau’s government believes it must demonstrate to investors the country is capable of reaching consensus to build major energy projects, while not alienating environmentalists who make up a key constituency for the Liberal Party. The government hopes to approve one project before the next election in 2019, the people said.

The prime minister routinely says, when asked about pipeline issues, that his government is balancing environment concerns and the economy but that his job is to get Canada’s resources to market. Trudeau spokesman Cameron Ahmad declined to comment Tuesday.

Natural Resources Minister Jim Carr didn’t directly answer when asked in a recent interview whether the government had decided it must build at least one pipeline.

“We have an obligation to the proponents and to those people who are involved in each of these major projects to assess it on their own merits, and to determine the national interest on the basis of what’s been proposed, and what has been recommended by the regulator,” he said Aug. 25.

Trudeau has signaled he doesn’t support Northern Gateway on its current route through British Columbia, and any major new routing could force the company to restart its approval process, the people said. A spokeswoman for National Energy Board, however, said that’s not necessarily the case. If a route-change request is made “we will take a look and develop a process for reviewing the application,” spokeswoman Sarah Kiley said by e-mail.

“We need pipelines, we need pipelines to the West Coast, and most advantageous for Canada of course are pipelines into the Asia-Pacific basin and Trans Mountain would certainly be helpful,” Prentice, a Calgary-based adviser in the energy group at Warburg Pincus, said Tuesday at the Bloomberg Canadian Fixed Income Conference in New York. “But we also need to bear in mind that Trans Mountain won’t solve the problem” because tankers that can navigate the region are too small to service Asia, he said.

Canada needs an energy port that can ship up to two million barrels per day to Asia, Prentice said, and Canadians should be concerned that investors are cooling to the country’s oil patch. “The concern that really should alarm us as Canadians is low-cost capital is exiting the Canadian basin,” he said.

Trudeau is also concerned about the electoral impact of Energy East, which is unpopular in Quebec, where the Liberals hold 40 of 78 electoral districts, the people said. TransCanada’s plan would see a new pipeline delivering crude from the oil sands in Alberta to the Atlantic Coast via the second-most populous province, a much longer route than the other proposals.

The prime minister has spoken favorably about the Kinder Morgan pipeline in the past and his government is said to consider it a net-positive for its so-called “progressive” political movement nationally. Though opposed by Vancouver’s mayor, it would be popular in Alberta, where Premier Rachel Notley’s New Democratic Party government is advancing carbon-emissions limits favored by Trudeau.

Trudeau’s cabinet has until December to make a decision on Trans Mountain. Finance Minister Bill Morneau and Trade Minister Chrystia Freeland are the loudest voices around the table in favor of energy sector development, the people said.

“There is no consent there and we are at great risk of impacting Canada’s most successful urban economy,” Robertson told reporters in Ottawa during a June visit to advocate against the pipeline. Fifteen of the 184 Liberal lawmakers elected last year are from the Greater Vancouver area and were “very vocal” in opposing the Kinder Morgan pipeline, the mayor said. “That certainly resonated and helped them get elected.”

TransCanada’s Energy East proposal has been beset by delays. The members of its regulatory panel resigned last week in the wake of conflict-of-interest allegations stemming from a meeting board members had with former Quebec Premier Jean Charest, who was working for the company at the time. The project also made headlines in last year’s election when it was revealed Trudeau’s campaign co-chair, Dan Gagnier, was advising TransCanada on how to lobby whichever party won the vote.

Enbridge’s Northern Gateway runs through the Great Bear Rainforest, which the prime minister says regularly is no place for a pipeline. However, Trudeau has also made improving indigenous relations a top priority and Enbridge has expanded the potential stake for indigenous groups in the pipeline. In June, a court rescinded permits for the pipeline that had been approved under Harper. Trudeau has until Sept. 22 to appeal the decision.