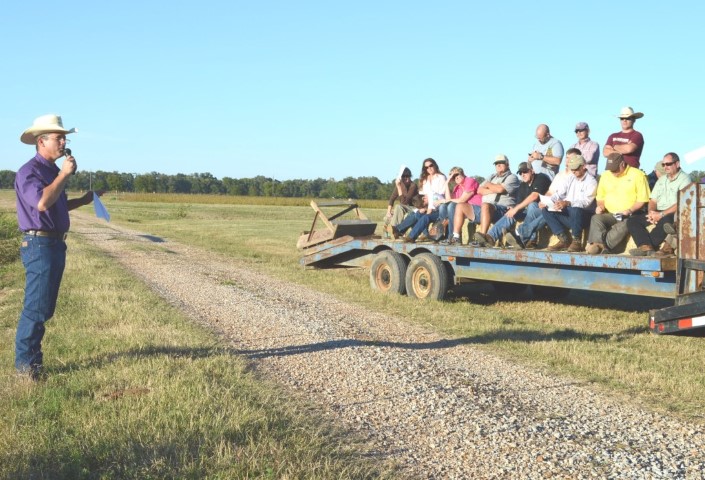 Injectable trace minerals may improve reproductive rates in cattle. This was one of several research projects cattle producers heard about at the Louisiana State University AgCenter beef cattle and forage field day on Oct. 16 at the Dean Lee Research and Extension Center.

AgCenter reproductive physiologist Glen Gentry has conducted two studies looking at how trace minerals can affect pregnancy rates. In the first study, young heifers that were moved to the Dean Lee Research Station were run through a chute, and every other animal was given a shot of the minerals, which contain zinc, manganese, selenium and copper. The minerals seemed to play a role in reproductive performance.

“At the end of the breeding season, we had a difference of 30 percent impregnate rates of the animals that got the injections versus the ones that did not,” Gentry said.

Weight also can affect reproductive ability, so Gentry looked at weights at the time of injection. He said heifers that received the injections were lighter overall than those that did not.

Gentry conducted a larger study on the entire cow herd on the station. He said there was no significant difference in pregnancy weight, except with two-year-old heifers. Pregnancy rates were 20 percent higher in that population.

“The minerals seem to work better in younger animals,” he said.

Donna Morgan, LSU AgCenter area agent, is conducting a two-year study to see if planting methods of winter forage affect the quality of the water running off the pastures. She is looking at sod-seeded, drill-seeded and prepared seed beds.

Among the three methods, she found little difference in the amount of total solids coming off the fields in the first year.

“In these conditions that we had, it didn’t matter which planting method you used,” she said. “It did not affect sediments coming off.”

She did see a difference in the amounts of phosphates and phosphorous that ran off the over-seeded method. She said they are learning that runoff from cattle pastures is relatively low compared to runoff from row crops.

“If you compare that to a lot of row crop situations in fields where there is a lot of conventional tillage, the difference is pretty staggering,” Morgan said.

She is conducting this research again this winter.

AgCenter ruminant nutritionist Guillermo Scaglia said producers can save money by stockpiling Bermuda grass to feed to cattle during the winter instead of hay, but his research found that Bermuda grass alone will not provide the proper amount of nutrients to cows that are pregnant or lactating.

“This can work for a cow that is open and dry,” Scaglia said. “You will need to supplement other cows grazing stockpiled Bermuda grass.”

In his study, cows grazing stockpiled Bermuda grass lost 85 pounds, while those on hay gained 25 pounds.

Louisiana Department of Agriculture and Forestry Commissioner Mike Strain told producers that the overall supply of beef in America is the lowest since World War II.

“Beef prices are going to remain strong for a number of years,” Strain said.