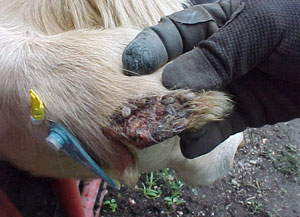 Ticks and flies infecting cattle with anaplasmosis early this year

While the moderate winter brought much-needed moisture to forage supplies, it’s also created a firestorm of ticks and flies early this spring. Cattle are just as much in jeopardy from tick diseases as humans.

Ticks and biting flies are the main method of transfer for anaplasmosis, an infectious disease that causes the destruction of red blood cells. The disease is caused by a minute parasite, Anaplasma marginale, found in the red blood cells of infected cattle and other animals. Ticks and flies can transfer blood from infected cattle to others in the herd.

On Monday, Cole said he found ticks on the ears of the heifers he was ear-tagging in southern Missouri. A couple of the heifers had large areas on the tips of their ears with hair missing. One heifer had six to 10 large ticks attached.

Cole has not identified the type of ticks that were present, but is working with an entomologist to identify them. He says there are several products labeled for the control of ticks on beef cattle. Fly tags, sprays, backrubber solutions and pour-ons can be effective and can help control horn flies at the same time.

Young cattle are more likely to recover from anaplasmosis, says Craig Payne, a University of Missouri Extension veterinarian. The first clue to an outbreak is dead cows. Older cows that become infected will abort their calf even if it is caught early and treated. (See below for clinical signs by age.)

A loss of five head due to anaplasmosis early this spring in southern Ohio is enough cause for alarm. These five head, added to the 17 head that died in that area last year, led Caleb Grooms, owner of Chapparal Feeds in West Union, Ohio, to organize an informational meeting two weeks ago to educate local cattlemen about the disease. Thirty local cattle producers attended the meeting, wanting information on how to prevent animal loss and transmission.

"With the mild winter, this is something we are going to be fighting all year," Grooms says. "What we’re recommending is feeding Aureomycin at the rate of 5,600 g per ton. The reason for that is the Purina mineral we sell is a 4 oz. per head per day mineral, which at 5,600 g per ton gives the cow enough prevention up to a 1,400-lb. cow."

A variety of mineral dosages are available from other sources, Grooms says, but he advises producers to make sure that animals are getting enough medication for their weight.

Producers should also take steps on the farm to prevent the disease from spreading. If cattle are being vaccinated, needles should be changed or sterilized between vaccinations because of the risk of transfer.

"We haven’t seen any new fatalities in the last month or so, but we are trying to get ahead of this. Especially in older cows, since they are more susceptible than younger cattle, as the heat picks up and increases animal stress in July, August and September, the impact of anaplasmosis will intensify," Grooms says.

Normally a southern problem, infection of the disease seems to be moving farther north. Whether through natural migration or higher amounts of animal movements from last year’s drought, the cause for the increase still isn’t clear.

"We’re going to be watching our local situation pretty closely," Grooms says. "If we see we need to have another meeting, we will. We had a good response, even from people that couldn’t make the meeting, and we basically sat down and did a quick one-on-one discussion about their current practices on the farm and feed analysis."

Clinical signs of anaplasmosis are related to the age of the animal. Calves under six months of age become infected, rarely show clinical signs, and remain carriers. Carrier animals seldom exhibit clinical signs when challenged with A. marginale later in life. A carrier animal may or may not give a positive reaction to serologic tests for A. marginale. A. marginale bodies may or may not be demonstrated in the stained blood smear of the carrier animal. However, the carrier’s blood is infective for the susceptible animal. Yearling to 18-month-old cattle will develop symptoms. The clinical signs are mild, and these animals become carriers. In adults, signs are progressively severe; the animals will either die or become carriers.

The incubation or prepatent period is three to eight weeks, which is the time between inoculation of the infectious agent and occurrence of A. marginale bodies in 1% of the red blood cells. The developmental stage is about four to nine days and is the time when most of the characteristic signs of anaplasmosis appear. During this phase, from 10% to greater than 75% of the red blood cells may be infected.

Clinical signs in adult animals include depression, off feed, fever up to 107°F, anemia or paleness and/or yellow mucous membranes, rapid respiration, urine may be yellowish in color, occasional belligerence, dehydration and constipation, and sudden death. Most deaths occur in the later stages of the developmental stage or early convalescent stage.

Be certain to visit with a large animal veterinarian about prevention of the disease in your herd and treatment of any infected animals. Anaplasmosis is a herd problem and should be approached as such. Outbreaks occur when there is no control program, anaplasmosis carriers and susceptible animals are present in the herd, and vectors (mechanical and/or biological) for transmission are present.